Two alumni wrote pieces featured on the front page of the commentary section of Sunday's Richmond Times-Dispatch on Constitution Day. 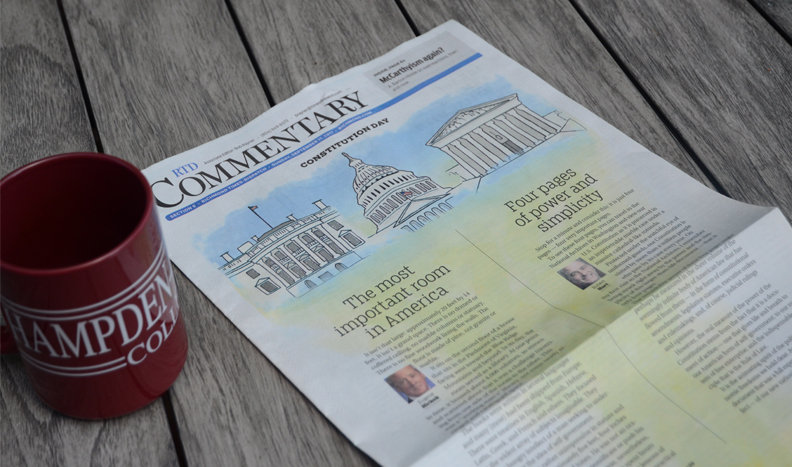 The commentary section of Sunday's Richmond Times-Dispatch experienced an unofficial Hampden-Sydney takeover on Constitution Day. The section's front page featured pieces by two guest contributors—both of whom are alumni of Hampden-Sydney. Eugene Hickok '72, a current trustee of the College, is the former deputy secretary of education for the United States. Robert Hurt '91 is the former representative for Virginia's Fifth District in the U.S. Congress.

In a piece titled "The most important room in America," Hickok describes James Madison's diligence in his home library at Montpelier as the future president read and researched his way to "a new approach to self-government."

"Madison ... set out to study the history of republics and democracies in an attempt to determine the true source of their vices and virtues so that he might come up with a strategy to correct the deficiencies of the Articles [of Confederation]. In other words, he did his homework," Hickok writes. "On this Constitution Day, it might be wise for all of us to retreat from the chatter in the media and seek to find quiet time to think and read and study about what Madison and his contemporaries sought to accomplish."

Hurt's piece, titled "Four pages of power and simplicity," is a celebration and reminder of the Constitution's enduring strength. "At a time when our country often seems hopelessly divided," he writes, "it is especially fitting that each of us as Americans come together and take a few minutes this week to learn a little more about our Constitution and to give thanks for the precious freedoms it protects."

Eugene Hickok currently serves as vice chairman of the Montpelier Foundation board. Robert Hurt is the director of Liberty University's Center for Law & Government.

A discussion of similar themes will occur on campus today at a Constitution Day lecture at 7:30 p.m. in Parents & Friends Lounge, hosted by the Wilson Center for Leadership in the Public Interest. Guest speaker Dr. Thomas Bateman of St. Thomas University will offer remarks on "Reason and Reverence in the Contemporary Political Maelstrom."

Hampden-Sydney College shares its founding year with that of the United States, and the influence of America's founding fathers is evident in the College's 242-year-old mission: "To form good men and good citizens." James Madison himself was a charter trustee of Hampden-Sydney, as was Patrick Henry.