Hampden-Sydney College alumni, students, faculty and staff members gathered for the dedication of the new Pannill Center for Rhetoric and Communication on Friday afternoon, October 11. 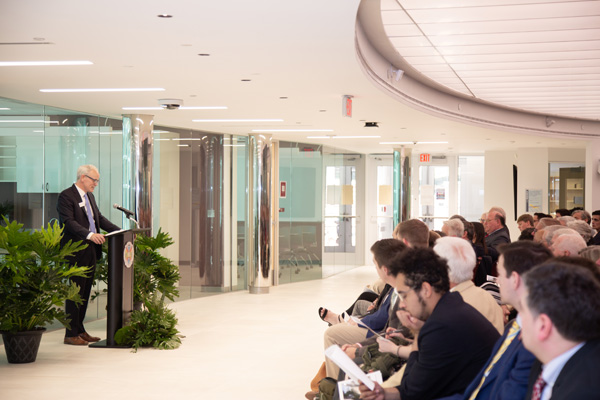 The standing-room-only crowd gathered in Birdsong Atrium, the Center’s central common area, for a ribbon-cutting ceremony featuring remarks by benefactor Will Pannill ’77, Chairman of the Board of Trustees Peebles Harrison ’89, Elliott Professor of English Evan Davis, and College President Larry Stimpert.

The recently expanded and renovated space in Pannill Commons houses the College’s signature academic program, the Rhetoric Program, as well as the Center for Public History and Office of Undergraduate Research. The Rhetoric Program’s move to a new, innovative space symbolizes the continual evolution of the Program, which now encompasses digital rhetoric in addition to oral and written rhetoric. “No matter what field our graduates pursue—whether it be engineering, sales, finance, marketing, medicine, the law, teaching, healthcare, or public service—if they are to be successful, they need the ability to write well, to speak effectively, and increasingly, to communicate confidently in digital forms,” Davis told attendees. 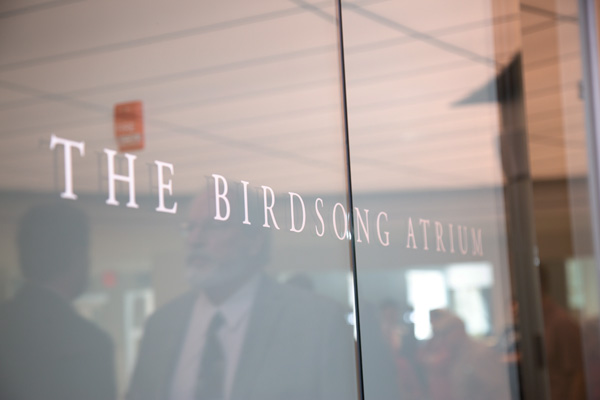 Featuring rhetoric, public history, and undergraduate research in concert with each other will strengthen all three programs and launch the 40-year-old Rhetoric Program into its next 40 years, according to Davis. “If our graduates are not merely to join the public sphere but to strengthen it, they need more than the ability to speak, write, and communicate; they also need to think both historically and empirically. They need to be able to articulate how the past impinges on the present, and to be able to engage public audiences in discussions of knowledge that they have gained through rigorous research, guided by faculty who possess both caring and expertise,” he explained.

No matter what field our graduates pursue—whether it be engineering, sales, finance, marketing, medicine, the law, teaching, healthcare, or public service—if they are to be successful, they need the ability to write well, to speak effectively, and increasingly, to communicate confidently in digital forms 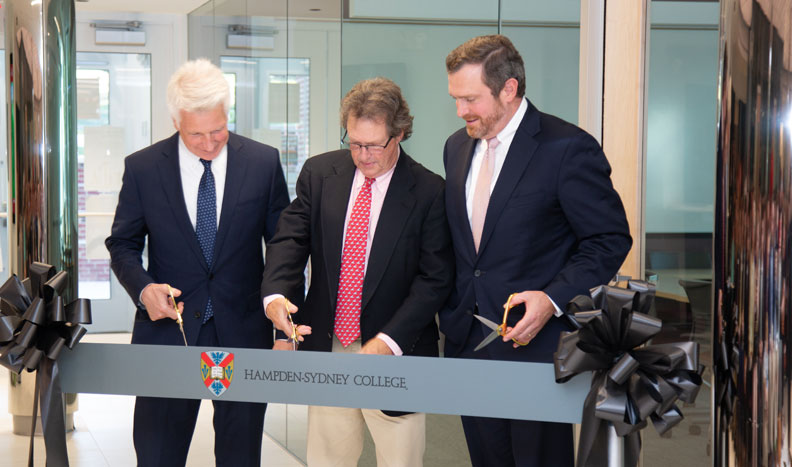 The ceremony also shed light on the coordinated efforts that produced a dedicated rhetoric center in a relatively short amount of time; the initial goal to endow a professorship for the Rhetoric Program quickly grew to a matching gift challenge presented to board members past and present. The result, according to Harrison, was an endowed chair and the seed money to make a faculty proposal of a dedicated rhetoric space a reality. “Through the extraordinary generosity of Will and Susan Pannill, Harvard Birdsong, Richard and Marcia Carr, Birch Douglass, those who gave in memory of Mike Paulette, and many, many others, we stand here today,” said Harrison. The Pannill Center, according to Harrison, “epitomizes the powerful role the board can play in advancing the academic program and how an earnest and collaborative effort with the faculty can lead to swift and positive change within academic program.” 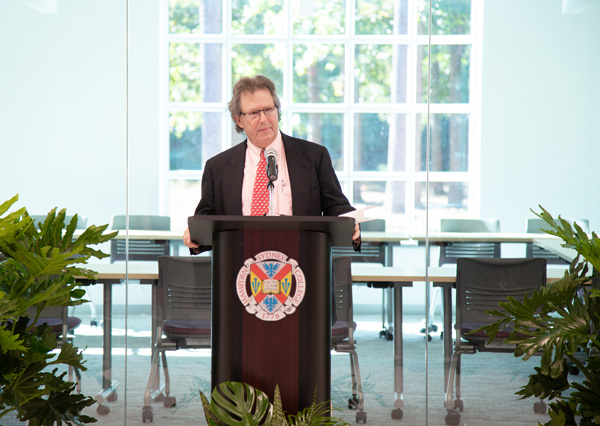 Pannill, whose generosity was central to the project’s completion, shared anecdotes about his own time at Hampden-Sydney—in particular, a memorable choice between his social life and his academic responsibilities. Pannill noted similarities to another Hampden-Sydney story shared on prime time television by Stephen Colbert ’86 in March 2018. While interviewing David Byrne of the Talking Heads, Colbert explained that as a Hampden-Sydney student, he gave up tickets to see the band in order to complete a paper comparing the occult imagery in Marlowe’s Tamburlaine the Great to the occult imagery in Shakespeare’s Julius Caesar. The decision, said Colbert, was inspired by the College gates’ Latin inscription, which translates “Come here as youths so that you may leave as men.” Colbert decided, “A boy would go to the concert, a man would write his paper.” Pannill himself made a similarly difficult decision between seeing a blues legend perform or studying for an upcoming exam. “Well, B.B. King was great,” Pannill told the amused crowd.

Before Pannill and Harrison joined Stimpert to cut the ribbon and officially open the Pannill Center, the president reflected on the critical role that communication plays in birthing great ideas. “There is nothing more important than a young man knowing how to express himself well, but he can’t express himself well until he has first learned how to think well. And all of our students learn both through the Rhetoric Program at Hampden-Sydney College,” Stimpert said. “Imagine the ideas untold that will be birthed because our young men have the courage and the ability to not just create an idea, but to take that idea and do something with it,” Stimpert continued. “This gives me great hope about the future of our country and our world.”