Paranormal Investigator Patrick Burns led students, faculty, and staff around Hampden-Sydney to search for activity on the historic campus. 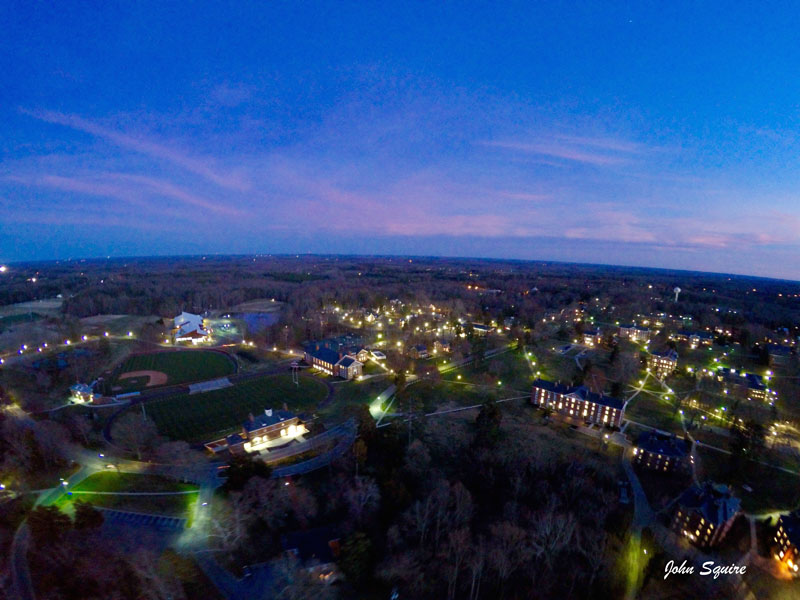 The night was not dark and stormy, but rather cool and clear. The moon was not full, though it pierced through the darkness enough to illuminate gravestones. The coyotes of Prince Edward County had gone silent for the evening, but, regardless, we had ghosts to hunt.

Last Wednesday night at 8 pm, students, faculty, and visitors piled into the Brown Student Center as paranormal investigator Patrick Burns visited the College for his second consecutive year. Star of the TruTv show Haunting Evidence, Burns has unique experience as a paranormal investigator as well a professional lecturer across the country.

Before setting off on our campus-wide hunt for the paranormal, we were given an idea of what to expect from our investigation as well as an introduction to the technology that is used to communicate with spirits. Electronic voice phenomena (EVP) are sounds found on electronic recordings that don't quite register with the naked ear. However, with particular focus on the smallest soundwaves, investigators can sometimes hear words or short phrases that are often perceived as paranormal communication.

Our investigation began in the Parents and Friends lounge in Venable Hall. As the crowd of about 40 gathered in the lounge, the only way to avoid bumping into a neighbor was by the reddish glow of the EXIT sign, our sole source of light. We didn't need light, though—we were ghost hunters. Burns began the recording device: "Are there any spirits present with us this evening?" A deafening silence consumed the lounge; while we knew we wouldn't be able to hear the same voice we hoped to hear through EVP, we could certainly hear our own heartbeats.

We finally listened to the recording through Burns' software, and, sure enough, heard a response:

A few more questions yielded no responses as clear as the first. Perhaps our ghastly host was a member of the Presbyterian seminary that the lounge used to house? Those questions were set aside as we headed to Estcourt, an administrative building in which employees have heard for years the sound of children's laughter, closing doors, and rocking chairs. Burns began the questioning: "Will the children of the house come downstairs to join us?"

Although the majority of the group most certainly did not want the children of the house to come join us, we waited again in silence. When we listened to the recording, we heard what sounded like three steps down the stairs—perhaps the same reluctant little girl that would later answer another one of Burns' questions: "Will you please reveal yourself?"

I want you to leave. 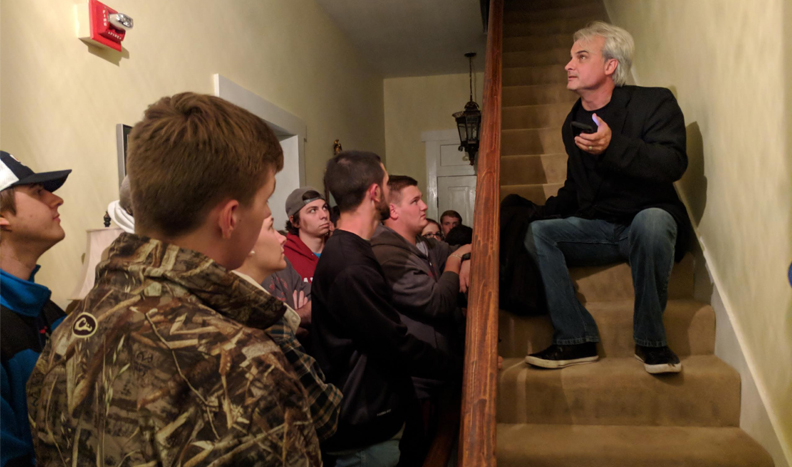 We laughed nervously, feverishly trying to get each little hair on our bodies to lay back down as we made our way to Hampden House. Burns had shared with us the recording from last year, in which the unmistakable sound of footsteps on the staircase can be heard. Those that work in Hampden House have plenty of stories of paranormal activity, as Director of Alumni Relations Aaron Van Allen '13 told us. "There was just one woman in the building the other day, finishing up for the day and about to head home. She heard in the next room what she thought was one of the student workers, ruffling papers and moving items around. She called out, 'Jake, is that you?' A voice replied, 'No, it's just me.' When she checked the room, it was completely empty."

While Burns carried out a long line of questioning, we waited in a nervous mob. We wanted something big. The questioning lasted about a minute and a half, and the wait proved to be worth the suspense.

"Last year we got a very clear recording in this staircase," Burns explained. "Is that individual present with us this evening?"

The sound of seven loud, menacing footsteps resonated in the dropped stomachs of each group member. The individual was indeed with us. Further recordings yielded nothing as distinct as the footsteps, but we still had one more destination: Cushing Hall.

Most people know, at least vaguely, the story of the killing in Cushing. In 1857, one student killed another in an effort to defend his honor. Last year, in response to a question of whether the killing was justified, a spirit answered.

This year, as we crowded into the first passage of Cushing, the question was different: "If there are any spirits present with us, could you please tell us what the fight was about?"

Students looked around, making hesitant eye contact with each other, acting as if nervous laughter could make such a response comedic. Younger children hid in their mothers' coats. An area coordinator with the Office of Student Affairs, Andrew Marshall '17 commented, "That's so Hampden-Sydney."

Whether you choose to believe in the paranormal or not, it's hard to deny that Hampden-Sydney's history would make for quite the haunting presence on campus—although parents need not worry about their sons being attacked by an indignant murder victim from the 19th century. Regardless, the paranormal investigation revealed a unique dimension of the history that permeates each of our buildings. Until next year, though, we can only wait for the spirits to initiate communication with us. If those spirits need help in constructing a clear, coherent message for us, they can stop by the Ferguson Center for Public Speaking, from Sunday to Thursday evening. Happy Halloween!