After authoring 100 articles and seven books—three of which were solo projects—writing is still an arduous process for James Pontuso, Patterson Professor of Government and Foreign Affairs. “It’s harder than anything else I do,” he says, “but the best feeling in the world is having written.” His latest work took eight years to complete, with Pontuso studying 75 books and spending countless hours thinking about the quality of virtue. The result is Nature’s Virtue, an academic defense of “the old-fashioned argument for virtue,” according to the author.

Discussion of virtue has fallen out of favor, says Pontuso, both because it cannot be measured by scientific methods and because it is viewed as a dated concept associated with repression. In addition, the constant stream of negativity broadcasted by 24-hour news cycles leads to the perception that virtue is lost in the world.

But Pontuso disagrees, citing the fact that people are kind and good to each other on a daily basis—their behavior doesn’t attract attention simply because it’s the norm. Pontuso also argues against the idea that humans cannot comprehend what is good or bad; instead, he makes a contemporary case for virtue grounded in Platonic ideals. “I argue that some things are right and some things are wrong,” he says. “It’s about the naturalness of goodness, not a particular expression of it.” 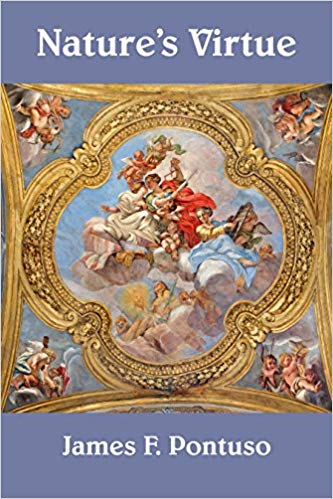 As a professor of government and foreign affairs, Pontuso clarifies that virtue is not about a specific form of government. “We live in a country that relies on the judgement and good sense of many people, especially in politics,” he says. “We should be thoughtful about that. That’s what I’m trying to elicit.” And the concept of virtue is particularly relevant at Hampden-Sydney, with its mission to form good men and good citizens. “Hampden-Sydney is a special place,” Pontuso says. “We get to work with the sweetest students, and we get to teach them to grapple with and understand the notion of being good.”

Ultimately, Nature’s Virtue is intended to be an academic resource. “Everybody wants to have their say,” explains Pontuso, “and academics have their say by thinking and writing. I wanted to write about what was going on in my mind, so I did.” Now he’s encouraging his colleagues to have their say, too: “I’m thankful to Hampden-Sydney colleagues past and present for making H-SC such a positive place to work, and to the College for supporting research. I encourage new faculty to write—if I can do it, they can do it.”