Finishing with a conference championship and a strong record (8-3), the Hampden-Sydney rugby team rewrote school history this fall in its 51st season. 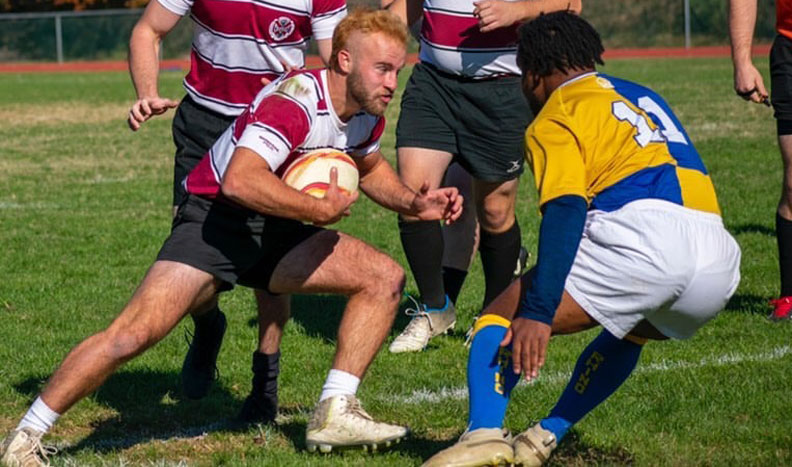 As a team comprised of students who, for the most part, have no background in playing the sport prior to college, the club has utilized the school’s mission of forming good men and good citizens to produce a group of fierce, goal-driven competitors. Through leadership and teamwork, the players have embodied the traits of true Hampden-Sydney men with their head coach observing carefully from the sidelines.

“Rugby instills the virtues of teamwork and sacrifice,” says Assistant Professor of Economics & Business and Head Rugby Coach Geoffrey Lea ’04, who sees rugby as a phenomenal way to promote the College’s mission. He explains, “You need to have trust and reliance on whatever anyone on your team is doing—without that, nothing functions properly.”

A glance back at the tenure of Lea reveals how that philosophy plays out. As a new coach in a time of transition, his goal was to “keep the light shining” for the team. With consistency, the team’s record has gradually progressed, as has the bond of the players. From washing pennies to delivering motivational half-time speeches, Lea has certainly kept the light shining, yet he refuses to give himself credit. “It is the captains who do most of the work, not me. Without them, we wouldn’t have a team,” Lea insists. The high level of camaraderie between Lea and the players is a product of student involvement at Hampden-Sydney. The head coach recalls from personal experience as a student, “If the students aren’t involved, nothing gets done.” He explains, “You can’t push a string; you can only get someone to pull it.”

Equally as humble, captains Gray Breeden ’21 and Spencer Parrish ’21 give all credit to Coach Lea. “He’s the glue that holds this team together,” Gray says. “He doesn’t make us do anything, instead he gives us the opportunity to be great.” Their role as team captains is easier said than done, as both of them lead daily practices in addition to their academic responsibilities. “We make play calls during games and practice,” Spencer explains. “We have to run drills, position players, and coordinate the team entirely.” While it is difficult to manage personal time between rugby and academics, both captains share a passion for the game. “The rugby team is my favorite part of this college by far.” Spencer notes. “I’ve played just about every sport there is, and nothing comes close to rugby,” Gray says.