Students and faculty perform in "Hampden-Sydney's Got Talent," a fundraiser for the Cares for Kids Campaign hosted by Omicron Delta Kappa.

While it's no secret that Hampden-Sydney excels in the field of charitable community outreach programs, in early April our Omicron Delta Kappa circle hosted "Hampden-Sydney's Got Talent," an event that served as both a fundraiser for ODK's Cares for Kids Campaign and a unique opportunity for students and faculty to showcase their individual talents. Donations collected at the door went to Madeline's House, a local non-profit organization providing comprehensive services for individuals and families affected by domestic and/or sexual abuse. 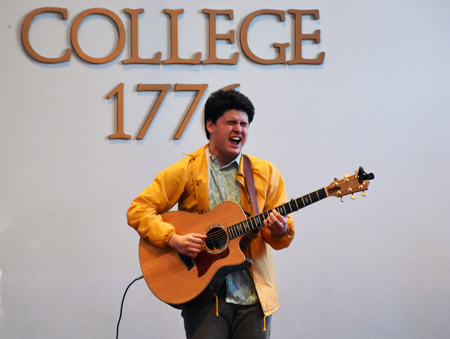 Dr. Rob Irons emceed the event, with Dr. Mike Wolyniak, Dean Jennifer Vitale, and Mrs. Cameron Cary judging the acts. The stakes were high: the winner was to receive a 3-day, 2-night getaway at a destination of his choice (courtesy of the Office of Student Affairs), and the second and third place winners would receive a $50 Visa gift card. While travel costs were not included in the grand prize, Dr. Irons made sure to mention that his research on the most expensive nightly rate in the world led him to the Hotel President Wilson in Geneva, Switzerland—the President Wilson Penthouse Suite could be booked for a mere $83,000 per night. The Office of Student Affairs offered no comment on the matter.

First to perform was Jordan Williams '20, who sang and played guitar in a moving rendition of Daugher's "Youth." Following Jordan's impressive demonstration of singing while fingerpicking, Dr. Irons offered perspective on such a skill when he told the audience, "I can't even play the radio."

Professor Neil Perry performed next, playing a three-song medley that included two originals and a cover of James Taylor's "Carolina On My Mind." Although many might know that Perry studied tuba performance at the University of North Carolina, Perry stunned the crowd with both impressive guitar work and captivating lyrics—the latter came as no surprise, considering Perry's position as the College's poetry scholar.

Sam Murphy '18, the outgoing student body president, followed Perry with a quirky but clever stand-up routine. After an accident took his left hand the summer before he started college, Sam managed to convince his roommate, Austin Hardman '18, that he needed help washing his "entire right side" in the shower. Sam's ability to make light of his own injury highlighted the brotherhood we foster at Hampden-Sydney in his roommate's willingness to assist him. A wholesome laughter filled Crawley Forum throughout Sam's routine. 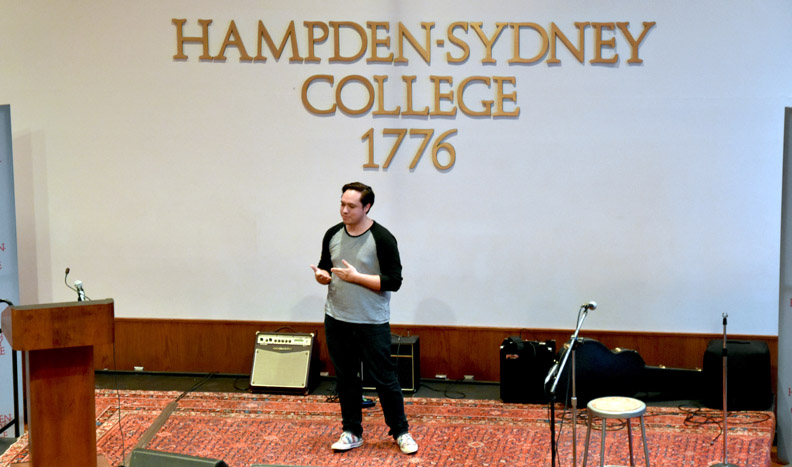 H-SC theatre star Arthur White '20 followed Sam, delivering two monologues. His first character was that of a potential divorcee defending her choice to eat the divorce papers ("with ketchup") to her husband, and the second was that of a 20-something waiter speaking passionately on his stance against having children. The adults in the audience seemed to relate to the second monologue more closely than the students did, although everyone was thoroughly impressed by Arthur's delivery of both.

Freshman Craig Burns' rendition of Jason Mraz's "I'm Yours" on his ukulele served as a well-timed reminder that summer is indeed on its way, despite the cold weather that continues to follow us into late April.

The cheerful atmosphere following Craig's performance was quickly shrouded in a grave solemnity as Wade Bredin '20 delivered a dramatic recitation of Edgar Allen Poe's "The Raven." Bredin's command of the lengthy poem shined through as he paced the stage, donning a sport coat and clutching a pipe. As the echo of the final "nevermore!" faded, a thunderous applause filled the room. 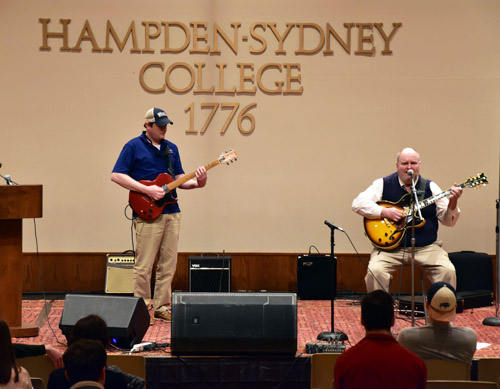 Dr. Ken Townsend and his son Neal closed the talent show with a tribute to the late Hampden-Sydney professor of rhetoric, Dr. Victor Cabas. The guitar-slinging duo performed three blues songs: Robert Johnson's "Crossroad Blues," Rick Darnell's "The Thrill is Gone," and Wilson Pickett's "Mustang Sally." Dr. Townsend filled the gaps between songs with commentary on his and Dr. Cabas's enduring friendship throughout their careers, and their shared love of blues music shined through in the song selection.

After much deliberation, the judges announced the first place winner to be Arthur White. Arthur's seamless transition between characters and convincing delivery of two distinct personalities offered the most alluring display of student talent. His victory was a surprise, but only because the pool of talent was as impressive as it was diverse.

Arthur was not yet sure as to his destination for the 3-day, 2-night getaway, but we can only hope that next year's tuition will not have to bear the brunt of a lavish weekend in the President Wilson Penthouse Suite. The real winner of the night, though, was Madeline's House. Regardless of the talent show's outcome, audience members and performers alike headed home—or back to the library—having joined together with the common goal of simply making a difference. Hampden-Sydney sure does have talent.