U.S. Senator Mark Warner of Virginia met with students at the Wilson Center for Leadership in the Public Interest. 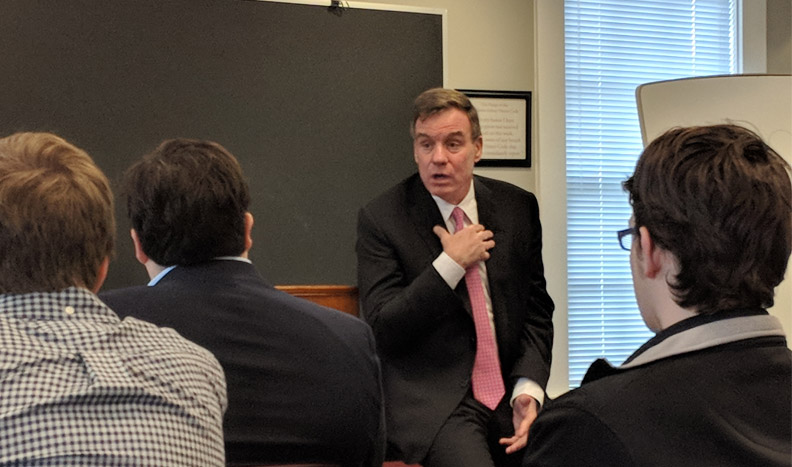 U.S. Senator Mark Warner of Virginia visited Hampden-Sydney on Thursday, March 29, for an intimate discussion with students at the Wilson Center for Leadership in the Public Interest.

The candid and wide-ranging conversation enabled students to ask the senator about a variety of topics. Several questions involved state and local issues, from the sanctity of state electoral systems to the funding of volunteer fire departments, while others focused on federal matters, including constitutional rights, data security on social media platforms, and even Senate parliamentary rules.

Virginia's senior senator closed by urging the assembled students to remain engaged with their government, carefully evaluate information they encounter online, and remember that no political party has a monopoly on the truth.

Senator Warner, the former governor of Virginia, has represented the Commonwealth in the Senate since 2008, and he currently serves as vice chairman of the Senate Select Committee on Intelligence. Senator Warner last visited Hampden-Sydney in 2009, when he gave the commencement address at graduation. Prior to that, he fondly recalls the Wilson Center's namesake, Lieutenant General Samuel V. Wilson, whom he came to know through their collaborative work with the Virginia Foundation for Independent Colleges during General Wilson's tenure as president of Hampden-Sydney.