Richard Moncure Jr. would be the first to admit that he has a dream job. And the view from one of his "offices"-a 21-foot Carolina Skiff-isn't bad, either.

No playing hooky on these water days

BY RUSTY DENNEN / THE FREE LANCE–STAR 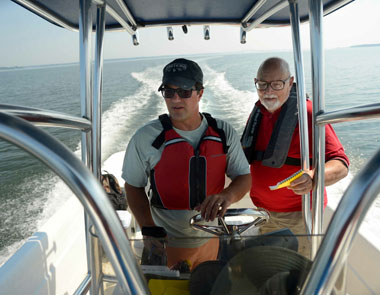 Richard Moncure Jr. would be the first to admit that he has a dream job. And the view from one of his “offices”—a 21-foot Carolina Skiff—isn’t bad, either. Moncure, 32, a waterman, former Peace Corps volunteer and restaurateur, is finishing up his second year as Friends of the Rappahannock’s first-ever tidal river steward.

His official office is a rented space at June Parker Marina in Tappahannock, where he coordinates FOR’s down-river education, conservation and advocacy efforts. Moncure doesn’t spend as much time as he’d like on the boat—donated to FOR by the Rappahannock Rotary Club—but goes out whenever he can. His presence on the water, and the boat with “River Steward” emblazoned on the side, helps get the word out about FOR and its initiatives. “I knew that people here are invested in this river, have a stake in it, and most of our programs have met with a positive reception,” Moncure said in an interview on Wednesday. That morning, Moncure and FOR volunteer Ed Overton launched the boat and headed out for a monthly water-monitoring trip. After a 45-minute run to Mosquito Point, they got to work measuring the river’s perennial summer “dead zone.”

Parts of a 20-mile-long swath of water between Tappahannock and Mosquito Point near the Chesapeake Bay have oxygen levels so low it can disperse fish and crabs and kill oysters and other bottom-dwellers. Water monitoring is one item on a long list of conservation-related tasks that Moncure oversees as FOR’s eyes and ears on the lower Rappahannock. Overton, 72, who lives in King George County, recorded readings for dissolved oxygen, salinity, suspended solids and temperature, as Moncure slowly lifted the flashlight-size probe in 3-foot increments from 54 feet of water. Six sites between Mosquito Point and Tappahannock are monitored monthly.

‘NOT HEALTHY’
The numbers were not encouraging, and typical of readings in previous outings this summer. Dissolved oxygen levels at the bottom off Mosquito Point were under 2 milligrams per liter. “That’s not a healthy situation,” Moncure said, as Overton entered numbers displayed on a hand-held meter attached to the probe into a yellow notebook. “Yes, and that’s not the worst we’ve had” at the spot, Overton added. The numbers improved as the probe surfaced, where wind, current, storms and wave action can restore the oxygen. Atlantic croaker, white perch and summer flounder avoid waters with dissolved oxygen levels below 4 milligrams per liter. Levels below 1 milligram won’t support most marine life.

“The river looks beautiful on top,” said Moncure. That changes in a wedge of oxygen-starved water typically near the bottom. “This is like checking the heartbeat of the system. It reflects on everything that goes on around the river,” Overton said. “The entire watershed contributes to what we see in the numbers.”

Moncure and Overton have been doing the monthly monitoring trips since April, and plan to continue into the fall, and again next summer.

RIVER CONNECTIONS
Moncure grew up in Westmoreland County, attending Woodberry Forest School in Madison County. The private school is on the Rapidan River, a tributary of the Rappahannock. “As a young man, I didn’t make the connection,” he says—that the Rapidan was one link in a larger river system. In time, “I would learn how complex that watershed is.” Along the way, he learned about the seafood business, fishing and crabbing with his father, Robert Moncure, and helping out at the family’s Happy Clam restaurant.

After graduating from Hampden–Sydney College in 2003, he joined the Peace Corps, spending 30 months in Africa. In Zambia, he helped farmers raise tilapia. That experience, he says, helped prepare him for some of FOR’s down river work here. Tilapia habitat “is almost the same design as we use here” to restore erosion-scarred shoreline, he said. While he was in Zambia, Hurricane Isabel destroyed the Happy Clam location in Colonial Beach in September 2003.

After returning to the United States in 2006, he helped his sister and father rebuild the restaurant. Then he read that FOR was looking for a river steward. Moncure figured it was the perfect opportunity: working in conservation, on a river, with a background in fishing and the seafood business.

Moncure, who is married with two young children, lives nearby on the water at Simonson in Richmond County.

At first, Moncure didn’t have a boat or an office. He used his 16-foot Boston Whaler when he went out. One of his early outings involved “rescuing” a portable toilet that had washed into the river. He and buddy Nate Parker, manager at June Parker Marina, lassoed it and hauled it to shore.

‘KIND OF A GAP’
Parker says having Moncure, the river steward boat and FOR’s office at the marina has been a good thing. “There’s been kind of a gap between local people who love the river and have grown up on the river and understood what it took to maintain the health of our river,” Parker said, and others, who “thought they were doing the right thing fertilizing lawns and cutting grass real low, and not realizing the negative impacts” of fertilizer running into the river.

“Richard’s been a great mediator between those and people on the other end of the spectrum,” Parker said. “It’s taken [FOR] 25 years to get from Fredericksburg to here, and it’s great having them here.” Well-known in Fredericksburg, FOR is still getting the word out about its programs down river. Parker said people see the FOR sign and ask, “What the heck is that? What do they do?” Tappahannock is the ideal spot for it, Parker says. “We’re right where the salt and fresh water meet.”

Along with its water-quality testing, FOR coordinates tidal cleanups; its Living Shorelines program helps stem shoreline erosion; it built four bio-retention cells at Lancaster Primary School to keep runoff out of the Corrotoman River. FOR’s Healthy Rivers Start at Home program provides a how-to notebook for river conservation activities; Save the Crabs and Eat ‘Em encourages more river-friendly fertilization techniques for homeowners. FOR and the Oyster Co. of Virginia are working together on Oysters for Life, a restoration and fundraising project.

Moncure wants to expand the water-monitoring to lower Rappahannock tributaries, and plans to begin providing oil-absorbent materials to marinas for gas spills. FOR also plans an education program about the prospect of hydraulic fracturing for natural gas in the Taylorsville basin in the Northern Neck and Middle Peninsula.

Founded in 1985, FOR, for most of its existence was focused on the upper river, from the headwaters in Chester Gap to Fredericksburg. That had to change with a whole-river focus as the impacts of pollution, runoff and sediment grew, says John Tippett, FOR executive director. “This was a long time coming, and it took a lot of planning to fulfill this part of our mission,” he said. “We launched it largely with programs to engage the public on the key issues that matter, and to raise awareness that a local group is looking out for the river as a whole.”