The Brown Student Center, a beautiful new hub for student activities,  was formally dedicated on November 3. 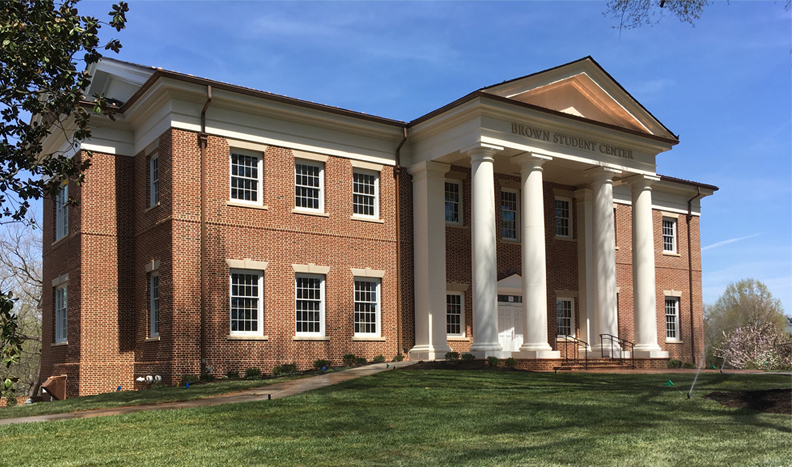 Orran L. Brown '78 shared touching stories of his mother and father, Anne and Ryland Brown, at the formal dedication of Hampden-Sydney College's new student center named in their honor on November 3. The Browns championed education within their family and throughout their community, which inspired their son Orran and his wife Ellen F. Brown to make the lead gift in this project.

At the dedication, President Larry Stimpert remarked: "As a Trustee, Orran reviewed the need for this student center and wanted to make the center a reality ... The gift is a legacy to his parent's lifelong belief in the power of education to improve an individual's well-being and that of his or her family. Following the example of his parents, Orran and Ellen have been generous to academic projects on this campus and beyond these gates. They have truly exhibited their respect for the strength and power of education."

Following the example of his parents, Orran and Ellen Brown have been generous to academic projects on this campus and beyond these gates. They have truly exhibited their respect for the strength and power of education.

Brown Student Center is the home of the Office of Student Affairs, student government, Ferguson Career Center, Flemming Center for Entrepreneurship and Innovation, the campus post office, and the Tiger Inn.

Chairman of the Board Peebles Harrison '89 said, "Almost a decade ago, a group of architects and contractors reviewed the structure of Eggleston Hall, and, after much consideration, determined that it was in the College's best interest, structurally and financially, to raze the existing Eggleston Library and build a new structure on this site. Thus, began the process of dreaming and designing the building we have today."

Since the beginning of the new academic year, Brown Student Center already has established itself as a hub of student activity with classes, club meetings, programs, and social gatherings.