"There's the saying that some teachers change your life; well, Dr. Ronald Heinemann certainly did mine. With his passion and his intelligence, he taught me to think about things in a different way, to see history in a different light. I am forever grateful for that." 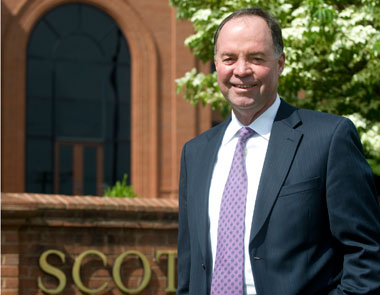 As a young twenty-something with a bachelor of science in history, Walker P. Sydnor, Jr. '71 was drifting, searching for a career - or even just a job - but without any prospects or any real idea what he wanted to do. It was the early 1970s and the clean-cut, predictable world he had grown up in was gone, replaced by a nation in turmoil and a new sense of freedom, possibly too much freedom. Sydnor had no idea he would find the perfect career for himself in a seemingly boring and lifeless industry: insurance.

After graduating from Hampden-Sydney, Sydnor traveled to Atlanta. Before too long, he was "flat broke" and hitchhiking his way back to Lynchburg, his hometown.

"I was a bad kid. My parents didn't know where I was or what I was doing half the time," he says with a bit of a laugh, but his mother and father, a successful dentist, welcomed him home with open arms. Soon he needed to begin looking for work and his uncle suggested the insurance business. "He said to me, 'This business may not be what you think it is.' And I thought, 'Good, because I couldn't think any less of it.' "

After cutting his long hair, shaving his big sideburns, and getting a new suit, Sydnor landed a job working for a large national insurance company. He would visit local agents in cities and towns along Interstate 81. After a few years, he got the chance to work at Scott Insurance, then a small agency in Lynchburg. That is when Sydnor's future started taking shape.

"I had seen hundreds of agencies, some good, some not so good. I learned to recognize characteristics of good agencies. The thing that was appealing about Scott when I joined them at 26-I had about five years of insurance company experience-aside from being a strong agency in a medium-size city was that we had three principals who really drove the agency and owned most of it and they were all in their 50s. They were all going to be retiring in their mid-60s, so I saw an opportunity there. It worked out."

It worked out indeed.

On December 31, 2013, Walker Sydnor retired as president of Scott Insurance, a position he has held for the last 27 years. During his tenure, the firm has grown from one office in Lynchburg to seven offices across Virginia, Tennessee, and North Carolina. The agency is a regional leader in commercial insurance and risk management. Scott Insurance has a successful employee stock ownership plan, high employee satisfaction, and an employee retention rate of 97%.

Sydnor says, "This company is entirely company owned. What it means is that everybody who comes to work here becomes an owner. We as management focus on that all the time. People come to work each day thinking and acting like an owner instead of as an employee. That translates to customer service. That translates to our sales guys going out with energy and believing in our service product. The employee ownership is the core of what has created a great culture, but the tone of how you treat each other starts at the top. So, we have a culture where we do respect each other and we try to work collectively together and we do a good job with hiring. We are very careful with hiring."Along with the employee stock ownership plan and careful hiring, Sydnor's leadership style contributed to Scott's growth and success.

"I believe it goes back to what your mother taught you. It's how you deal with people. If you are straightforward, if you are honest, if people trust you, if they think you have a plan and are interested to be a part of it-so you have to have a little bit of vision-that makes a good leader. I don't believe in 'Donald Trump leadership': it's all about me and 'you're fired.' It's not that. Maybe in his world it is, but in my world it's not. We have a company that has an element of care in it. We treat each other well, and I think that's leadership. When I look back over my life and my work and my time at school, I think I've always been somewhat of a leader. There is sort of a repressed period in college where you try to go inside and figure out yourself, but I think in general I have thought that if I want to get into something, I want to get in all the way."

During his years as a college student, Sydnor, the country, and the College were all going through changes. For the first three years, he was on a pre-med track but ultimately decided that was the wrong path and switched to history. The Vietnam War was raging and students across the country were waging protests. Sydnor says even Hampden-Sydney "had a chill in the air."

"It wasn't like it was in Berkley but we had our element of it. We shut the school down for a week after Kent State. Students were ready to set the dorms on fire. I mean, people were angry. So, it went from a fun-loving party atmosphere to something way different. At some point there-for some of us, at least-fraternities were irrelevant. I kind of moved into that group."

Sydnor had pledged Lambda Chi Alpha as a freshman but was deactivated the following year. During this turbulent time, Sydnor found an inspirational professor in Dr. Ronald Heinemann. "There's the saying that some teachers change your life; well, he certainly did mine. I came from a very conservative upbringing and had normal, Central Virginia attitudes about things. With his passion and his intelligence, he taught me to think about things in a different way, to see history in a different light. I am forever grateful for that."

Now a full career later, Sydnor is retiring from Scott Insurance and faces some of the uncertainty he faced when he graduated from Hampden-Sydney. What will he do with all this newfound freedom? He plays tennis and golf with a group of close friends. Also, he and his wife Sallie plan on spending some time at their condo in South Carolina and visiting their children in New York City and Jackson Hole, Wyoming. Most of his time, however, will likely be spent in his new position as chairman of the board of Centra Health.

Certainly Sydnor has more direction now than he did nearly 43 years ago, but in the same sense he is facing a period of limitless possibility. The next stage of his life may be the best one yet.