Advancing And Celebrating Poetry From Students 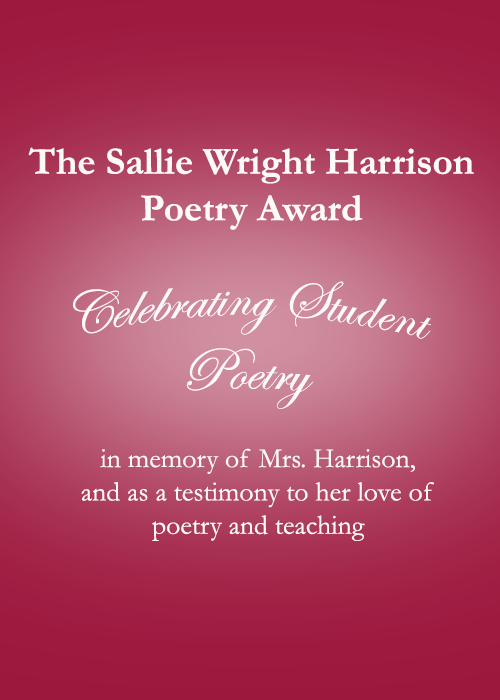 The Sallie Wright Harrison Poetry Award was established in 1998 by an alumnus, in memory of Mrs. Harrison, and as a testimony to her love of poetry and teaching. This fund has been endowed in order to further promote the creation of poetic writings by students at the College. All students are strongly encouraged to try their hand at this form of expression, which may be different from what they have previously attempted, and which they may well find enjoyable as well as enriching. To this end, the poetry fund generates an annual cash award (most recently in the amount of $500) for a Hampden-Sydney College student who has proven by his authorship to possess a genuine interest and creativity in verse.

The poet’s language is a faithful echo of his feelings. It is emotion – warm, generous, lofty emotion, inspired by a perception of the beautiful and the grand, such as seems to raise him who feels it above the sordidness and petty concerns of ordinary life – which seems to be the essence of poetry…

The award will be made to a Hampden-Sydney College student who has demonstrated competitive writing ability, by participation in the English Department’s periodic poetry contest.

The Chairman of the English Department will set the amount of the award and may select a recipient as often as annually. The prize will be awarded at Spring Convocation. The donor, who will remain anonymous, will be informed of the designee each year.

Letter and Certificate for the Winner

At Convocation, the student winner will receive: 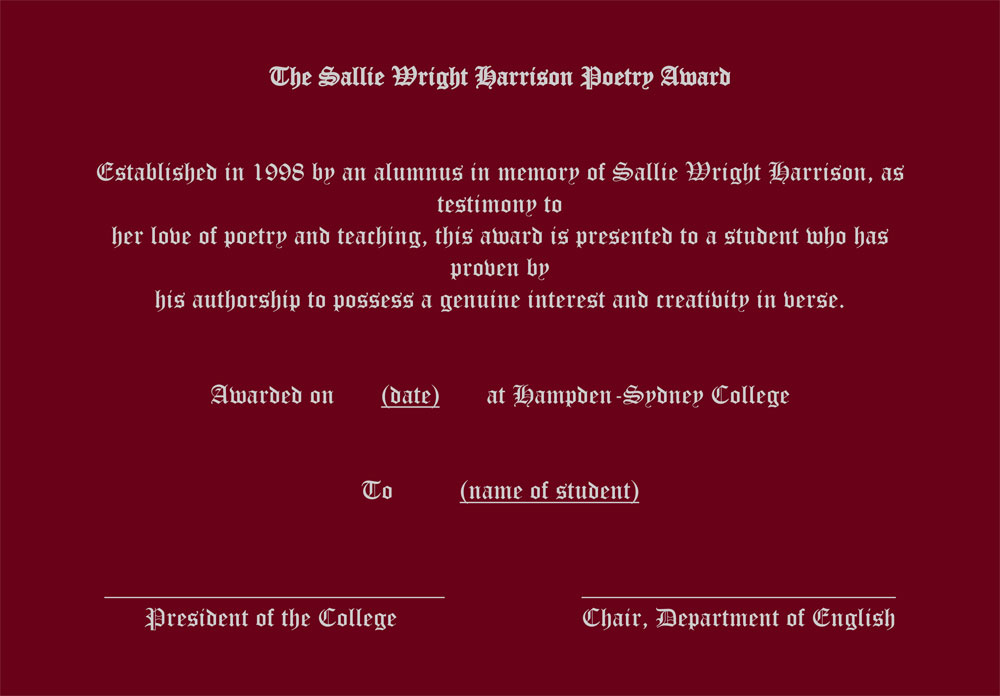 by Will Wilson, 2019 award recipient

I run, careering down a frost-worn path
lung-strained and scatter-brained bounding
along the cracks formed from frost
freezing rainwater in the stone wrinkles.

Near the street sign saying “God’s Way”,
The “G” mostly gone and looking ghostly
Was the “s” softly silenced by the smudge
Of some dirt that danced over the apostrophe.

Possessive gone, now reading “od Way”
The green sign reflected the light from a white
Chevy’s eyes blinking with the high-beams
On and off and quickly turning into the trailer homes.

I run, near the sign mouthing “God’s Way”
But saying “od Way” all lung-brained
And scatter-strained from rounding around
The din of trailer homes doubtless dying silently.

No, it’s H-H-O, like two words
Squished without the portmanteauing

And now it seems to make total
Sense, the way the weather makes sense

And Isaac George Bushouse did not
Complain, I’ve heard, even though

Sometimes it rains and rains
And the celery molds, and sometimes

Withholding all the debt of buying
Land near Kalamazoo, well that’s the gist

A bit less shame, until (again, I’m dubious)
He hitchhiked back to Kalamazoo

And paid off all the loans, pulled out
That fishhook of failure, and opened-up

I am not the man I was before! and on the
Window underneath it, Tomatoes, Onions,

Celery For Sale. And that is how I got that
Extra H that, despite being absent

On nearly all of the certificates from grade
school, remains, just like my occipital lymph

Nodes: displaced and anomalous and usually
Unnoticed, but mine to touch and know.

What is it that makes you so daunting shotgun?
Your neck is smooth, butt nicely rounded, and carved by hand,
Color of the brightest hue be not your friend,
For your color belongs to the dirt,
To the land. Branches, burrs, and bark unite
To make your hue shine no light.

You are a lady,
Who knows no more that what is told.
So stretch out your body and be gripped,
Until we find a blood that fits
For some warm ruby lips.

Bury your target’s blood into me.
One more we’ll take, you and me.
Do not worry about a lack of shimmer,
But live undauntedly, for your blood is all mine.

A brave .3 wielding a parenthesis
Wages war on the superscript 2
Squaring it from above
While X struggles below
To be found
Crammed next to a slope
That's coming to its end point

It spends its days talking
To imaginary #'s graphing itself,
And reciting love poems to π

It will be the same for both of us

He tossed the mulch like shrapnel, lifted it
from a wheelbarrow mountain of shattered
bark to the dirt path under his boots,
an explosion of dust gushing out
each time the weight of mulch came down.
There was a rhythm to the work:
expected clash of steel on steel,
scrape of the tines against the barrow’s bowl
which, every time, gouged at my ears,
relentless as gunfire. When the pile
was depleted, I hauled back up the hill
for more, shoveled the mess in, and turned
back, tripping over roots and rocks to his tired
form. Old as I was, he still seemed to loom
over me, a giant, somehow more
than what he was: ultimately, a man
leaning against the handle of a busted old pitchfork,
dusk falling around him at the edge
of woods we thinned ourselves.
It was his eyes that spelled exhaustion,
the brim of his hat that seemed to weigh him down
most. War, I thought. I have never been
to war. Neither had he,
but something in his leaning form
told me of what war on the body was like—
that any man, at the fleeing shapes
of the foe, collapses, shivered spear
slipping to the dirt.
He would have made a good solider,
I guess, except that he would have felt
too much in his bones for whatever soul
stood across the line where no one crosses,
that pale expanse between your ranks
and theirs. Somewhere in that plain
Aeneas flees with father and son,
his wife’s ghost urging him to run.
Is this what it means to father—that above
all prior duty, he must fling himself
through the bronze-sheathed masses
with past and future in tow?
He pauses now, and tells me this
is good work, the work souls are made of.
He buries the pitchfork in the mulch and lifts.

When the spring comes
there is a breath
deep and full. It
hums in the wings of insects.

When the snow melts and dries,
it was there all along,
but hidden from the eyes
of the birds long gone, but soon-returning.

And among the grasses
waving in the warm wind
rabbits play with snakes
a game that has one winner.

Young saplings reach above
the begging arms of weed stalks,
their learning-to-walk branches
dense with unseasoned, babyskin
leaves that crumble wet
in the palm of my hand.

The pink flush of azaleas
Covers gardens and borders side walks,
With long grandpa arms of live oaks
Hanging moss over lazy streets.
Fishermen and sailors on the town pier
Stretch out over the calm brackish water.
A child gasps, scanning
Through the public binoculars,
At Mobile’s skyline across the bay.
Wives and children waltz
Down the sidewalks of old downtown,
With Tulips and Stargazer Lilies.
Old men grin in the barbershop and,
Out from the little league park,
Ghosts march, each innocent’s past.
A Magnolia’s white brilliance
Is ignored by children climbing its thick branches.
Next to a yacht club, filled with docked sailboats
Sounding light, hollow tinks as they sway,
A Pelican skims the placid waters,
Swoops up sharply, then dives for its blue mullet dinner.
At night, the streets empty.
If it’s fall or winter, the trimmed sweet gums
Are covered with sparkling lights.
There is only a community college nearby;
But, on Memorial Day the wild ones have returned.
They talk at the pub and the café by the sailboats,
Sometimes oblivious to the treasure of the sleepy town.
The old clock stands handsomely on the corner,
While the dawn soon lights its brilliance,
And city workers rise to maintain our beauty.

I was planted in the Tobacco fields
of Eastern Carolina, reared up
with a gut full of smoke,
sixteen years before America
was told to never forget.

And so, I grew; my rough leaves
rubbing against one another
like pages of a Dickens’ novel
whose words bled black into
the sandy, fertile soil.

Subsiding on words like
French fertilizer: Dumas, Duras,
I grew; my rough leaves
reaching north where the tea
turned bitter and the wind cold.

Reaching north to escape this
Faulkner-weed, this rampant
overbearing shadow, I grew;
what place is there for a
voice that can only mimic?

Exhaling that belly full of
smoke, like three before, and
so many after, I bloom;
uproot to realize the ground is
only good enough here.

Here in the tobacco fields
of Eastern Carolina where
my family dies, black-lunged,
where I stay rooted and solemn
reading words like Seven-dust.

Your oldest shoes
Have beaten the odds
And gotten you home before curfew;
Tracked mud into the basement and
Discovered dog piles on your lawn.

They carried you up the rock
That overlooks the river,
And took a relaxing nap
While you dove into the cool water.

How did they navigate the mud,
The rocks, and the piles
When you never bothered

A camera paraphrases life,
freezing circumstance with
calculated depressions
of the shutter release.

Bits of metal, plastic, and glass
form a time machine
incapable of predicting the future,
only revisiting the past.

Film is pulled from its back
like a fetus
delivered too soon from the womb.
The pictures are underdeveloped
overexposed
and poorly prepared to do their job.

A slim pane of glass
focuses the intended image
and preserves it.
A mere reflection of reality.
Odorless. Tasteless. Silent.

The camera’s product is stillborn,
And folks who only exist in pictures
are still dead.

You poor moon.
You’ve got that weary look in your eye
From people carving craters into your face
With old battered words.
But full and flowering,
You’ve still got it in you
To light my pen.
The waves don’t seem to mind,
Beaten to exhaustion as they are too.
till they go on,
Licking your light,
To you as you are to the sun
—and I, to both of you the same.
In the end I am most weary,
For the weight of all human longing and joy,
Summed up in your sandy milklight,
Beats down on me,
Trying to squeeze out some drop
That is mine.
After all, everyone else has taken that from you.
I’m glad to see your old habits still reign,
for the white of my paper
Carries on the tradition,
Bouncing up thrice-reflected light,
—excepting of course the scars
carved by my black pen.

I hope I didn’t ruin you with this tattoo.

The Web, The Box, and the Machine

This spider web of
Grand design catches all
With a gentle, calculated
Touch, or a quick
Explosion.

This toolbox of
Honest joints and obedient
Bones is piloted by a short, fat foreman,
Who blames all losses
On the weaker link
At the other end.

This love machine strokes,
Caresses and sifts its
Way into her pulsating
Heart, sending streams of
Electricity down her bent
Spine.

This web; this box;
this machine; this hand.

"Silence the child!"
a heated whisper shouts.
The door opens
a seeming mile away.
The creak of entrance
first made Little Love cry.
Momma does everything:
sugar, comforts, baubles.
Every creak above us,
every light and shadow,
agonizes the unintentional betrayal.
We silently scream,
"Nothing nere,
but a moldy sack of potatoes
and salted pork gone bad."
Mother frantic to silent Little Love:
croons, cradles, breast.
The steps slow above us,
dully drumming, thinking.
We force our gaze ahead.

A hand holding a shawl
passes over my lap,
silences the child.
Dust slowly falls as
the steps stop,
deciding, then decide;
there is nothing of worth
in the cellar.

We are saved
and our secret safe.
We now look at Little Love limp.
All the same as before,
silent.