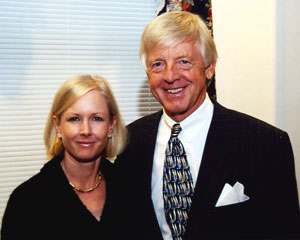 THE DAVIS FELLOWSHIP program was established in 2002 by a gift from Norwood H. Davis, Jr. '63, retired chairman of Trigon Healthcare Inc., and his wife, Marguerite Cash Davis. The Fellowship is designed to attract to Hampden- Sydney College "young men who will make a difference in society."

With 35 years of executive experience, Norwood Davis knows that there is always a need for those who truly want to lead. "Many are not willing to assume leadership roles because they are concerned about the risks associated with being out front. Society needs leaders who are willing to take risks." He has in his own life shown no hesitancy to be "out front." A native of Richmond, Mr. Davis attended Hampden-Sydney College on a basketball scholarship and led the team as captain for three years. He graduated in 1966 from the University of Virginia School of Law. After 31 years with Trigon Blue Cross Blue Shield, Mr. Davis relinquished the position of chairman and chief executive officer in April 1999. He continued as chairman for a year.

By creating the Davis Fellows, Norwood has proved that young men can literally be transformed in only four years at Hampden-Sydney. This is a lesson in philanthropy at its best.

Mr. Davis, a past president of the Hampden-Sydney College Alumni Association and a former trustee of the College, has served as director of First Union-Wachovia Corp. and Signet Banking Corp., and has also served as a trustee of Hampton University, the Mariner's Museum and of the Boys & Girls Clubs Foundation. Mr. Davis was also the chairman of the U.S. Olympic Committee of Virginia, chairman of the Metro Richmond Chamber of Commerce and was a board member of Hilb, Rogal & Hamilton (NYSE).

Marguerite Davis is a graduate of the University of Virginia School of Engineering. She is a former trustee of Hampden-Sydney College and of the Virginia Engineering Foundation. She owns The Davis Collection, a distinctive jewelry boutique in Richmond.

On March 24, 2012 The Hampden-Sydney Society of Founders met at The Ritz-Carlton Hotel in Charlotte, NC. The Society presented Norwood H. Davis, Jr. '63 with the Keating Medallion, the highest honor for alumni and friends of the College who have demonstrated outstanding service and extraordinary dedication to Hampden-Sydney College.