Alumni and students discussed work ethic, character, and the Hampden-Sydney College brotherhood at a networking event hosted by the College’s Alumni Association.

Tiger alumni returned to the Hill to share their career experiences and advice with Hampden-Sydney students at panel discussion and networking reception on February 20. Representing a variety of professions and diverse career paths, the alumni spoke of Hampden-Sydney’s role in their current success and their experience as part of the College’s alumni network, recently ranked second in the nation by The Princeton Review.

The evening’s formal topics ranged from entrepreneurship to the current job market, but the discussion returned several times to the importance of integrity, work ethic, and leadership—traits that were strengthened during their time on the Hill, according to members of the alumni panel.

Chris Peace ’98, an attorney and 14-year Virginia state legislator, encouraged students to take the values of the Hampden-Sydney brotherhood with them into their professional lives. “Whenever you face a difficult choice, remember who you are and the core values you learned here: accountability, civility, integrity. Guard those common bonds and represent Hampden-Sydney well,” said Peace, who served in the student senate during his H-SC days. “Hampden-Sydney is the way the world should be, but isn’t. Figure out a way to make the world more like Hampden-Sydney,” he told the young Tigers.

Several alumni also spoke of the value of their liberal arts education to their professional success. As president of a real estate acquisition and development firm in Raleigh, NC, Bo Bennett ’90 said that his history and economics background gives him both the critical and creative thinking to identify opportunities and organize diverse partners. “A liberal arts education enables you to think outside the box and look at the big picture,” he explained.

Whenever you face a difficult choice, remember who you are and the core values you learned here: accountability, civility, integrity.

And David Campbell ’15, a project lead at the Naval Surface Warfare Center Dahlgren Division, praised the College for teaching all students, not just humanities majors, to write and communicate well. “There’s a reason why a lot of people have me proofread white papers before they go up to the Pentagon,” the former physics major joked. Campbell said STEM students at Hampden-Sydney should feel optimistic about their future, noting the scientific programs at the College “will prepare you to do anything and go anywhere you want to go.”

Andrew Mitakides ’07 credited his success to his Hampden-Sydney education, as well. The actor said that the breadth of perspectives he encountered at H-SC enhanced his ability to develop characters and personas—skills he now uses as writer, producer, and host of Gem City Tonight, a late-night television show in Dayton, OH. Mitakides also encouraged students to be willing to ask fellow alumni for assistance. “I’ve never once asked a brother and had them say no,” he said, reminding attendees that asking for help is a sign of strength, not weakness. “Without the Hampden-Sydney alumni network, I wouldn’t have a show,” Mitakides said. 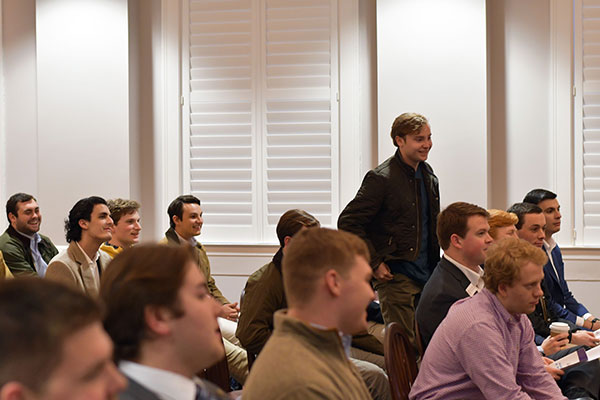 Although all of the speakers spoke highly of the connections available to students through the Hampden-Sydney alumni network, they reminded the audience that strong character and work ethic—rather than connections alone—bring Hampden-Sydney men success in the professional world. Campbell noted the growing number of Hampden-Sydney men working at the Dahlgren research center and their reputation for excellence. “We have over 20 H-SC guys working there, and now we’re actively recruiting from Hampden-Sydney,” said Campbell. “My supervisor always comments on our work ethic. H-SC guys get the job done.”

Brian Gwaltney ’19, the most recent graduate on the panel, agreed. As a student, Gwaltney served as captain of the football team; a resident advisor; and a member of the Student Court, the Garnet and Grey Society, the Minority Student Union, and the Tiger Athletic Club—all while maintaining two campus jobs. “I learned early on that what I gave to Hampden-Sydney, she would give back to me. So I immersed myself,” he said. Now a financial advisor in Colonial Heights, Gwaltney says, “I apply the same drive I had here to my job with Wells Fargo Advisors.”

All of the panelists told students to be optimistic about their futures, but Bennett took it even further, telling the students to embrace failure as well as success. “Don’t be afraid of failure,” he said. “Life is hard. You aren’t always going to walk in and get the job, but don’t give up.”