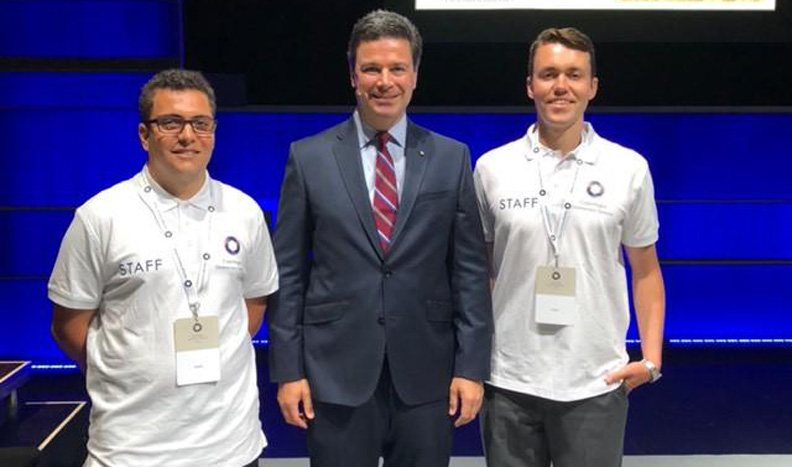 Alexander and Raleigh spent their days in Denmark interacting with many of the 500 attendees—prominent civic leaders, former heads of governments, journalists, and democratic-rights activists from more than 75 different countries. Alexander, a native of Germany who hopes to pursue a career with the United Nations or NATO, said the experience aligned with his “interest in local initiatives that play out on a global scale.” And he was able to use five of his six languages—German, Italian, Croatian, Spanish, and English—to welcome summit attendees in their native tongues during registration.

For Raleigh, who started Capital One’s commercial bank leadership program after returning from Copenhagen in July, working behind the scenes at an expeditionary economics program was particularly memorable. “Four businessmen from areas of conflict in the Middle East presented ideas to a panel of investors, including Lars Christensen, previous owner of Saxo Bank,” he explained. “The idea is to help entrepreneurs reestablish communities, leading to long-term prosperity and innovation that isn’t reliant on foreign aid.”

It was heartening to see Raleigh and Alex engaging so actively with such an accomplished group of public and private leaders. The young men demonstrated, as Hampden-Sydney men so often do, that they are prepared for a meaningful place at the civic table. 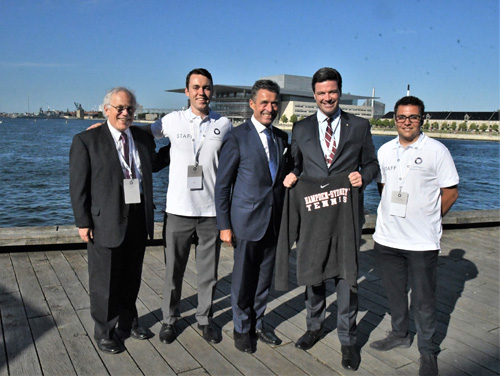 Both young men credit the College’s Wilson Center for Leadership in the Public Interest for helping them make the connection with the Copenhagen Democracy Summit, as well as the Ferguson Career Center for coaching them on resume and interview preparation. Dr. David Marion, Elliot Professor Emeritus of Government and Foreign Affairs, introduced Alexander to Henrik Fogh Rasmussen ’03, founder and president of Argonne Global and member of the Wilson Center’s Advisory Board, at a campus event last spring; the young man was prepared with a hard copy of his resume and a desire to secure an internship opportunity. “Rasmussen is a known name in Europe,” explained Alexander, “so I was quite honored—and also quite nervous—to meet him.”

That campus connection, coupled with financial support from the Wilson Center, opened the door for the two young Tigers to attend the summit in Denmark. “It was great to have Alex and Raleigh represent Hampden-Sydney at the Copenhagen Democracy Summit,” Rasmussen said of the connection. “Hampden-Sydney men are by definition future leaders, so it was only natural to have the College represented at the Summit, which brings together current, future, and retired leaders from politics and business every year to build closer relations between the world’s democracies. I hope that we will have Hampden-Sydney students participate in the Summit for many years to come!”

Hampden-Sydney Professor of Government and Foreign Affairs John Eastby, who also attended the summit, agrees. “It was heartening to see Raleigh and Alex engaging so actively with such an accomplished group of public and private leaders,” he said. “The young men demonstrated, as Hampden-Sydney men so often do, that they are prepared for a meaningful place at the civic table.”