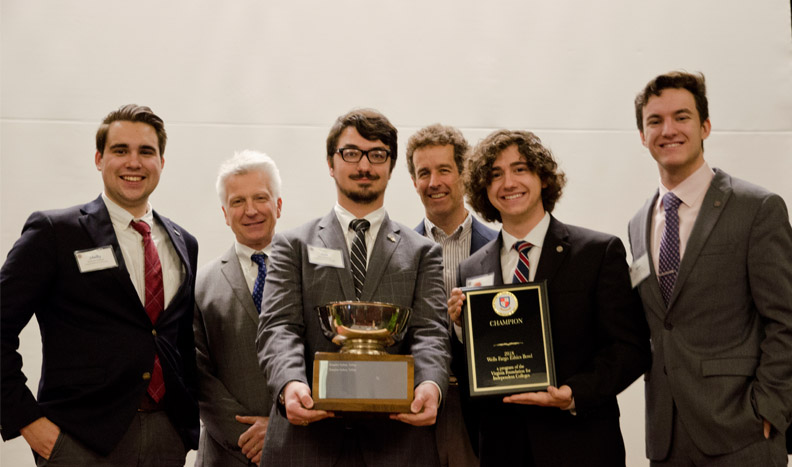 The cases debated throughout the competition involved real world dilemmas that affect people's lives in increasingly complex ways, encouraging the students to think critically about practical situations. This year's theme, Ethical Issues in a Multicultural Society, covered topics from religion to medicine to social work. Sixteen teams from fifteen schools presented their analyses, positions, and recommendations to panels of judges comprised of business, professional, and educational leaders from across Virginia. 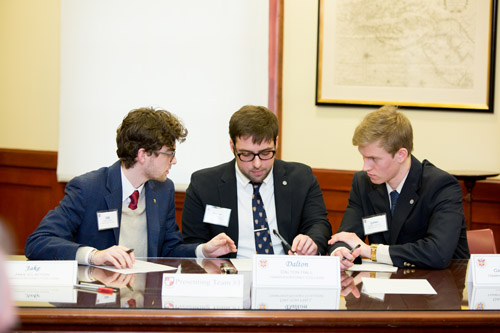 As host of this year's competition, Hampden-Sydney provided two teams, the second of which also gave an impressive performance—losing only one closely-contested round to team Randolph-Macon who went on to the finals. Despite participating for this year only, the team of Jacob A. Clayton '19, Dalton P. Hall '19, and Garnet S. Crocker '20 put forth full effort and committed themselves to the process. "The team one victory was really a two-team effort," said team coach Dr. Patrick Wilson, "with each team bringing out the best in the other during nearly two years of practice."

The College has been a consistently competitive force, winning five of the past seven championships, and appearing in seven of the past nine championship rounds. Wilson credits this successful record to the students' discipline, thoughtfulness, and sensitivity to underlying ethical principles. "I feel privileged to be working with such talented young men." He continues, "By demonstrating integrity and sportsmanship through many months of preparation and in the competition itself, the students have put ethics into practice."