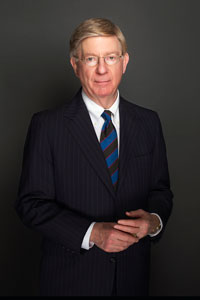 George F. Will
George F. Will's newspaper column has been syndicated by The Washington Post since 1974. Today it appears twice weekly in more than 440 newspapers. In 1976 he became a regular contributing editor of Newsweek magazine, for which he provided a bimonthly essay until 2011. In 1977 he won a Pulitzer Prize for commentary in his newspaper columns.

In June 2019, Mr. Will released his most recent work, The Conservative Sensibility. Altogether eight collections of Mr. Will's Newsweek and Washington Post columns have been published, the most recent being One Man’s America: The Pleasures and Provocations of Our Singular Nation (2008). Mr. Will has also published three books on political theory, Statecraft as Soulcraft: What Government Does (1983), The New Season: A Spectator's Guide to the 1988 Election (1987) and Restoration: Congress, Term Limits and The Recovery of Deliberative Democracy (1992). In 1990, Mr. Will published Men At Work: The Craft of Baseball, which topped The New York Times bestseller list for two months. In 1998, Scribner published Bunts: Curt Flood, Camden Yards, Pete Rose and Other Reflections on Baseball, a best-selling collection of new and previously published writings by Mr. Will on baseball. Mr. Will's most recent book on baseball is A Nice Little Place on the North Side: Wrigley Field at One Hundred (2014). In July 2000, Mr. Will was a member of Major League Baseball's Blue Ribbon Panel, examining baseball economics. 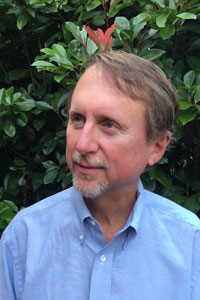 Ken Woodley, a 1979 graduate of the College, was an award-winning journalist at The Farmville Herald for 36 years, the final 24 years as editor.

Rather than integrate classrooms, Prince Edward County shut down its entire public school system from 1959 to 1964—a fact the 22-year-old Woodley did not know when accepting employment at the then family-owned Farmville Herald after graduation. Nor was he aware that the newspaper’s editorial pages had led the public cry to close schools in “massive resistance” to the U.S. Supreme Court’s Brown decision of 1954.

More than 2,000 African American children in the county were left without a formal education in their lives because of the school closures.

The Appomattox County resident spent his entire journalistic career at The Farmville Herald, writing and working for racial reconciliation. In 2004, the Virginia General Assembly created the Brown v. Board of Education Scholarship Program and Fund, a reparation proposed by Woodley, who also led the political fight for its passage. The scholarship program has served an estimated 250 of those who had been locked out of school as children.

In 2006, the Society of Professional Journalists, Virginia Pro Chapter, presented Woodley with the George Mason Award for “demonstrating that a community newspaper and a principled editor are relevant and vital parts of civic leadership and for showing that the importance of journalism is not defined by the size of the community or the circulation of the newspaper in which it is practiced.”

Woodley’s The Road to Healing: A Civil Rights Reparations Story in Prince Edward County, Virginia, was published by NewSouth Books in 2019.

He and his wife, Kim, have two children and one grandchild.