When their son was diagnosed with dystonia, Rick and Michelle Staab began researching the disease and soon realized that there was little information to be found. So they started Tyler's Hope, a non-profit organization to help find the cure.

This story appeared in The Record, February 2010

Just like most dads, Rick Staab '90 liked to spend time with his young son, teaching him the fundamentals of sports. In February 2005, when he noticed that his seven year old son Tyler was having trouble shooting basketball, he showed him how to keep his elbow in close to his body. Tyler tried to follow his dad's instructions but his elbow would shake uncontrollably. Rick Staab asked his own dad-a physician-about it and was encouraged to get it checked out. This innocent afternoon of playing basketball started the entire Staab family on a journey that has given them a renewed outlook on life, family, friends, and service to others. 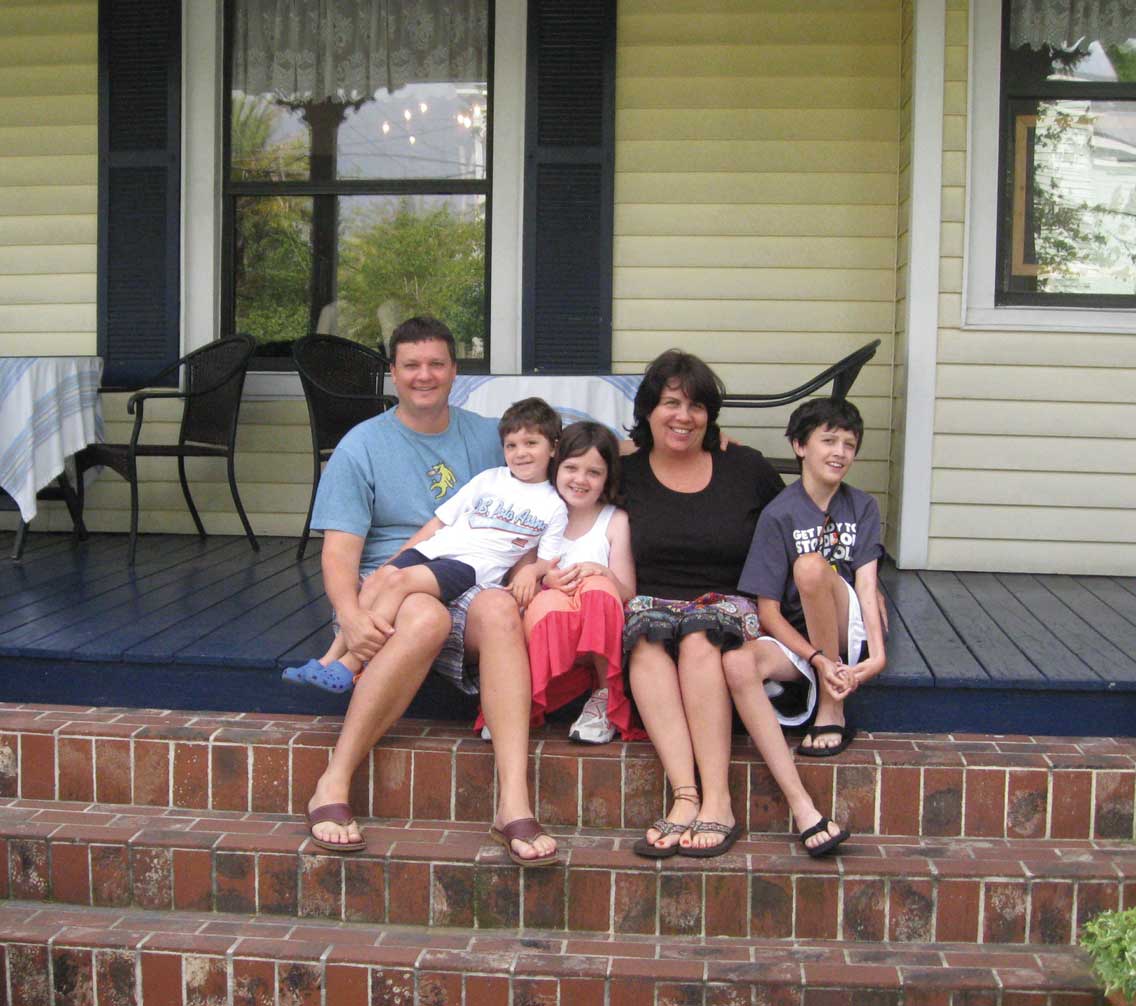 As they tried to determine what was wrong with Tyler, the Staabs met with pediatric neurologists in their hometown of Gainesville, Florida, as well as doctors in North Carolina, New York, and Massachusetts. Meanwhile, Tyler's condition was worsening. He was losing control of his arms and legs; they twisted and contorted painfully. After meeting with an adult neurologist at the University of Florida, Tyler was finally diagnosed with Primary Generalized Early-Onset Dystonia, a neurological movement disorder characterized by involuntary and often painful spasms of the muscles. "It's like all of his muscles are pulling at the same time," says Staab. "Like the muscles are all cramping at once. It can be very painful."

A second blow quickly followed when the Staabs learned that Tyler has a genetic form of the disease, so his younger sister and brother were also at risk. Just like most dads, Rick Staab '90 liked to spend time with his young son, teaching him the fundamentals of sports. In February 2005, when he noticed that his seven year old son Tyler was having trouble shooting basketball, he showed him how to keep his elbow in close to his body. Tyler tried to follow his dad's instructions but his elbow would shake uncontrollably. Rick Staab asked his own dad-a physician-about it and was encouraged to get it checked out. This innocent afternoon of playing basketball started the entire Staab family on a journey that has given them a renewed outlook on life, family, friends, and service to others.

"Tyler has always had an unbelievable attitude during all of this. Of course, I'm his dad, so you really have to meet him to see for yourself. But he is always smiling; he never complains. At such a young age, he had to go through a lot of painful procedures-we were all scared-but he knew that if he went through that, other children would not have to."

The symptoms of dystonia took over Tyler's body quickly after the family first noticed them. Staab says, "He couldn't walk or talk. He couldn't hold a cup. It happened nearly overnight. What is amazing is that children with dystonia continue to grow normally physically and mentally. They just cannot control their muscles. Also, Tyler was burning a lot of calories because of the constant muscle activity, and since he has trouble eating he was losing a lot of weight. Now he is on a feeding tube to help with that problem."

When their son was diagnosed, Rick and Michelle Staab began researching the disease and soon realized that despite being the third-largest movement disorder in the world, there was little information to be found. What they did learn, though, was that researchers had pinpointed the gene and the protein linked to dystonia. If they could turn those off, people with dystonia could go back to living normal lives. With a cure so close, the Staabs decided to take action.

"Finding a cure for dystonia is achievable," says Rick Staab. "We decided that if we can raise enough money, we can have a big impact. We are blessed with a great family and with great friends who support us, so three-and-a-half years ago we started Tyler's Hope, a non-profit organization to raise the money necessary to finding a cure for dystonia."

Just as Tyler's Hope was getting off the ground, the Staab family was dealt another blow. Tyler's sister Samantha was diagnosed with dystonia also. Rick Staab says, "We had been preparing ourselves because we knew it was a possibility. In Samantha, the symptoms present themselves a little differently, so that was a little scary at first. She can eat and talk, but her twisting is in her back and neck, which can be very uncomfortable. Lying in bed at night, she might not be able to roll over if she wants to. But she has always been there for Tyler, helping us care for him and supporting him. She knows what's involved and that Tyler endured a lot of painful procedures that children like her won't have to."

Having two children with disabilities, another young child, a business, and a non-profit organization keeps the entire family very busy, but the Staabs are making the best of the situation. Tyler's Hope has distributed $750,000 in grants to dystonia researchers around the country and recently gave $1 million to the University of Florida, which happens to be one of the leading neurology research centers. All of the money raised goes to research efforts.

In addition to giving grants, Tyler's Hope also has been conducting research summits during which doctors and scientists working on finding a cure for dystonia gather to discuss progress or setbacks they have had. This collaboration allows the participants to learn from the work of others. Tyler's Hope dispenses grants to allow these researchers to pursue the programs that appear to be the most hopeful.

"This has definitely changed our lives- in many ways for the better. It is definitely hard at times. We have a third child and when he spills a glass of milk or drops something your mind plays tricks on you. 'Is he showing signs of dystonia?' That can be stressful. Also, kids can be mean. That can be difficult too. Sometimes you want to baby them and do things for them, but other times you know you have to teach them too. I am fortunate to have a successful business that is growing and my wife and I have a great relationship. This has brought us closer together."

Tyler has been undergoing a procedure called deep brain stimulation. Surgeons have implanted electronic leads in his brain that are connected to a battery pack in his chest. Staab says the procedure was experimental when Tyler first began but the results have been very effective. Tyler has gone from being completely wheelchair bound to regaining the use of the right side of his body.

While the research has provided some hope for people with dystonia, advocating through Tyler's Hope has introduced the disease to many people. "Not only have our friends stood beside us during the past five years, but we have made many new friends. Working with Tyler's Hope, we have developed friendships with some big players: Jeb Bush, Manny Fernandez, Muhammad Ali-we spent all day with him; my wife fell asleep on his couch. But these people get involved because they are good people and understand what this does to children. They really want to help."

Needless to say, living with dystonia in the family and advocating for a cure has changed the lives of everyone in the Staab family. For the children, the disease has been a series of ups and downs. Tyler went from running and playing as a healthy child to being confined to a wheelchair; thanks to deep brain stimulation he can walk again but his life is not back to normal. His parents Rick and Michelle were once busy shuttling children from place to place and working for their personal well-being. Now they are caring for two disabled children, running a well-respected non-profit organization, and developing a dystonia research network.

"Before Tyler's Hope we were active in charities and community organizations, but it was a small part of our lives. We would go to fundraisers and have a good time, but at the end of the night we would go home again and not think much more about it. We are much more involved mentally and physically now. We really immerse ourselves in groups. It sounds crazy but we work with other charities too, not just Tyler's Hope. Michelle and I have gone through a transformation because of this. I wish it had not been because of this, but it was. It makes you want to do more. We will never go back to the way we were."

The prospects for a dystonia cure are good, but the Staabs know that more money is needed for additional research. "I am hoping for a cure within the next five years," says Rick Staab, "if not for a cure, for something that will lead to a cure. That is our goal. That is what we are focused on, so we have to raise as much money as we can. Our goal is to reach the point where we don't need Tyler's Hope anymore."

Staab is looking forward to the day- hoping for the day-when he and Tyler can take a break from all of the doctor's office visits and fundraising events and get back to where they left off: outside, playing a little basketball.