all-male colleges in the country.

History is alive at H-SC. In continuous operation since November 10, 1775, Hampden-Sydney is the tenth oldest college in the United States. Here, the past meets the present as we prepare students for not just successful careers, but successful lives in the 21st century.

Since before the American Revolution, Hampden-Sydney College has been transforming young men into the best possible versions of themselves, with the moral strength and intellectual capacity to be leaders in the workplace and in their communities. Our mission remains unchanged: To form good men and good citizens in an atmosphere of sound learning.

Hampden-Sydney, one of the oldest colleges in the United States, is the last American college founded in British Colonial America, and has remained in continuous operation since November 10, 1775. Located on a 1,300-acre campus in Virginia's beautiful Southside, the campus' central portion has been designated a National Historic Preservation Zone. It includes Cushing Hall (1822-1833), originally called New College, and Venable Hall (1825-1830), originally Union Theological Seminary. Hampden-Sydney's charter trustees included Patrick Henry and James Madison; William Henry Harrison was a member of the class of 1791. The College is part of the Road to Revolution Heritage Trail and the Civil Rights in Education Trail.

Thanks to legendary codes of honor and conduct, a celebrated 40-year old rhetoric program, and a contemporary liberal arts education featuring supportive, yet exacting faculty, Hampden-Sydney men graduate with the courage to do what is right, the ability to express themselves confidently, and the skill to develop creative solutions for complex problems. In small classes, and within a lasting brotherhood, Hampden-Sydney men embrace challenges in and out of the classroom, learn to lead by assuming responsibility, and develop the self-awareness necessary for forging unique paths. Ninety-four percent of Hampden-Sydney graduates complete their degree in four years, and the College's alumni network has been ranked among the strongest in the country.

It is a treasured thing for a youth to have a special place in which to become a man—a beautiful place where honor is a virtue, civility a habit, and learning a goal.

To Manner Born, To Manners Bred: A Hip-pocket Guide to Etiquette for the Hampden-Sydney Man, by Thomas H. Shomo '69

The first advertisement for the College appeared in Williamsburg's Virginia Gazette; it promised that classes would begin on 10 November 1775: 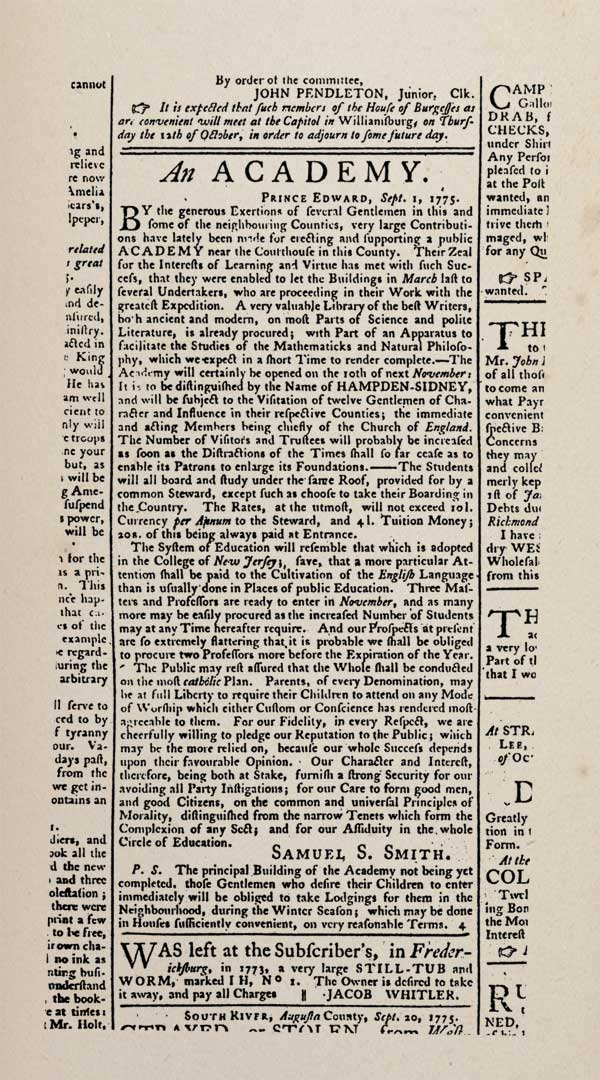 The Public may rest assured that the whole shall be conducted on the most catholic Plan. Parents, of every Denomination, may be at full Liberty to require their Children to attend on any Mode of Worship which either Custom or Conscience has rendered most agreeable to them. For our Fidelity, in every Respect, we are cheerfully willing to pledge our Reputation to the Public; which may be more relied on, because our whole Success depends upon their favourable Opinion. Our Character and Interest, therefore, being at Stake, furnish a strong Security for our avoiding all Party Instigations; and our Care to form good men, and good Citizens, on the common and universal Principles of Morality, distinguished from the narrow Tenets which form the Complexion of a Sect; and for our assiduity in the whole Circle of Education."
~Samuel S. Smith

"A Portal Through Time"

"One of only three four-year, all-men's liberal arts colleges in the nation, Hampden-Sydney College's secluded campus is located just a few miles from the more developed town of Farmville. It is also the oldest private charter college in the Southern U.S., the 10th oldest college in America, and the last college founded before the start of the American Revolution. The school enrolls about 1,100 students on average, and the campus has expanded since its establishment in 1775 from 100 acres to 1,300 acres of lush lands surrounded by scenic woodlands. With a noteworthy presence in the Civil War and part of the campus listed on the National Register of Historic Places, the school has a long, interesting history which is evident in the buildings. Two of the brick structures, Cushing Hall (built in 1822) and Venable Hall (1825), provide examples of Hampden-Sydney's historic significance in architecture, but the real beauty at the college lies in the manicured, old-world landscape and picturesque grounds. A walk through Hampden-Sydney College acts as a portal through time, to an age where genteel southern tradition and untouched countryside were the rule rather than the exception." — Virginia Travel Blog

Most of the brick-and-mortar buildings that rose to replace the Old College of 1775 have remained stubbornly resilient in their refusal to fall. Cushing, Venable, Graham, and others were the products of a massive fundraising effort during the 1820s, and through the years thousands of students, faculty, and staff have walked through their seemingly timeless halls during their lives at Hampden-Sydney.

But a handful of these structures succumbed to the great enemies of architectural endurance. Fire, deterioration, and the wrecking ball-and likely some criminal malfeasance-felled a few of these buildings. Although little remains beyond a few pictures and sketches, with a bit of digging in the College archives and with a few words from some of the old-timers around campus, we can still catch a glimpse of Hampden-Sydney as she once stood.

Read the entire feature story in The Spring 2016 Record of Hampden-Sydney.

Although the original college buildings served Hampden-Sydney for the first four decades of its existence, by the 1840s, most of them had fallen into ruin. This area of the original campus came to be known as "Old College," but over time the locations of those first structures were lost to memory. Today, not a single building from the 18th-century College stands.

Efforts are now being made to study and preserve the archaeological remains by using cutting-edge technology to survey the area. Funded in part by the S. Mason and Lulu Cole Charitable Trust, the project is a cooperative effort between local archaeologists, the Esther T. Atkinson Museum, and the Hampden-Sydney College history department.

Read the entire feature story in The Spring 2018 Record of Hampden-Sydney.

Are you a history buff and want to know more about the history and founding of Hampden-Sydney College? Download this document!

The Museum supports the College's mission by collecting, preserving and interpreting objects that enhance its educational offerings and promote its history.