must complete the Rhetoric Program.

The cornerstone of our academic experience is the belief that there is nothing more valuable than teaching young men how to express themselves clearly and confidently.

A "Write" of Passage

The Rhetoric Program, established 40 years ago, is based on a 1978 faculty resolution that states: All Hampden-Sydney graduates will write and speak competently. Consisting of course work and examinations that focus on argumentative and analytical writing and presentational speaking, the program is designed to assure that all graduates can express themselves clearly and cogently. Instructors of Rhetoric 100, 101, and 102 — supported by the Writing Center — emphasize the process of writing as well as the finished product. Instructors of Rhetoric 210 and 310 prepare students for public speaking in the classroom, community, and workplace. Students in these elective courses are supported by the Speaking Center.

As a director fortunate to work with actors of the highest caliber, it’s important that I have clear and precise ways to communicate. A lot of the skills I learned in the Rhetoric Program, I find myself using today, and I couldn’t be more thankful.

The Value of the Rhetoric Program

As persuasive communicators, Hampden-Sydney alumni regularly tell us that in competitive situations in the job market and in graduate schools, they have had a considerable advantage over other candidates because the Rhetoric Program gave them the ability to think clearly, write concisely, and speak cogently and persuasively. These are skills that employers and graduate schools consistently demand and reward.

Hampden-Sydney's Rhetoric Program has been featured in Inside Higher Ed, "Teaching for Better Writers" and The Atlantic, "What Aristotle and Stephen Colbert Have in Common."

Most first-year students will enroll in Rhetoric 101, in which students learn to write expository and argumentative essays and to edit their work effectively, and then in Rhetoric 102, in which students hone their writing skills, learn to write researched essays, and work intensively on "rhetorical grammar" so that they can communicate their ideas in effective prose. Students who need preparation for the regular sequence of Rhetoric courses are enrolled in Rhetoric 100, a course that also focuses on argumentative writing and that helps students learn to write prose free from what the college identifies as major sentence-level errors. Many students also elect to take Rhetoric 210: Introduction to Public Speaking, and some go on to study Advanced Public Speaking in Rhetoric 310.

All rhetoric classes have a 14-student maximum enrollment so that professors have sufficient time to read and grade their students' essays carefully and so that they have time to meet with their students in individual conferences.

The Rhetoric Minor has become the most popular minor at Hampden-Sydney College. The requirements for a minor in Rhetoric are 19 hours, including

All Hampden-Sydney students must pass the Rhetoric Proficiency Exam (Rhetoric 200) before they may be graduated from the College. The RPE is a three-hour essay exam which tests a student's ability to invent a reasonable and thoughtful thesis "on a subject not foreign to the student's experience" and to construct a logical and well-supported argument on that thesis.

The first advertisement for the College appeared in Williamsburg's Virginia Gazette; it promised that classes would begin on 10 November 1775 and laid a conceptual foundation for the Rhetoric Program that lives today: " The system of Education will resemble that which is adopted in the College of New Jersey; save, that a more particular Attention shall be paid to the Cultivation of the English Language than is usually done in Places of public Education. " 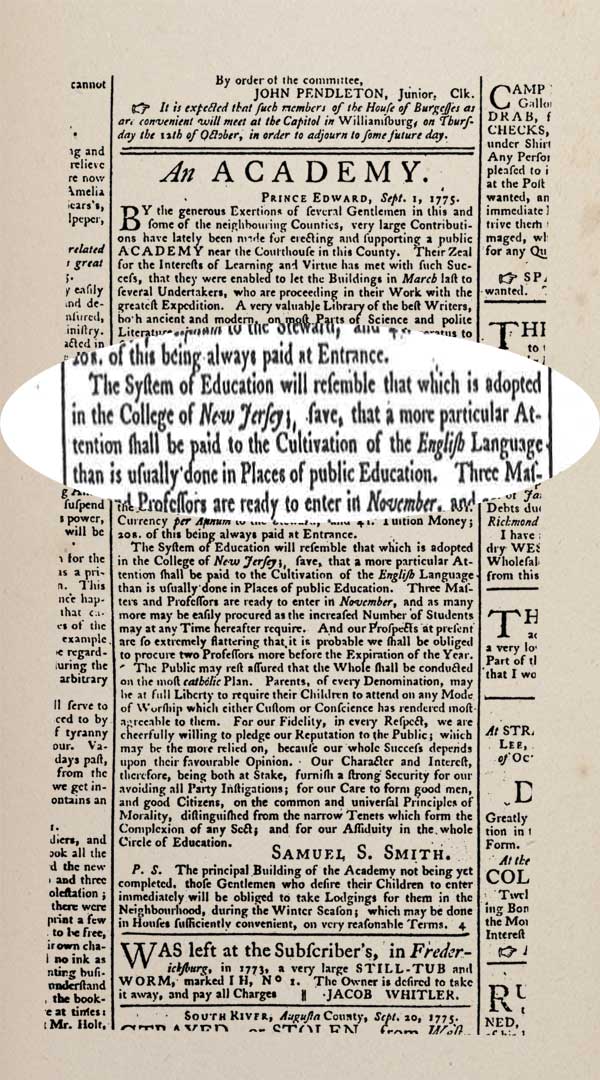 The Public may rest assured that the whole shall be conducted on the most catholic Plan. Parents, of every Denomination, may be at full Liberty to require their Children to attend on any Mode of Worship which either Custom or Conscience has rendered most agreeable to them. For our Fidelity, in every Respect, we are cheerfully willing to pledge our Reputation to the Public; which may be more relied on, because our whole Success depends upon their favourable Opinion. Our Character and Interest, therefore, being at Stake, furnish a strong Security for our avoiding all Party Instigations; and our Care to form good men, and good Citizens, on the common and universal Principles of Morality, distinguished from the narrow Tenets which form the Complexion of an Sect; and for our assiduity in the whole Circle of Education."
~Samuel S. Smith

The Pannill Center for Rhetoric and Communication places the College's central academic program in the physical center of campus. The brand new state-of-the-art facility features a dynamic, collaborative, and comprehensive work space that enables every Hampden-Sydney student to graduate with skills that employers consistently seek:

the ability to communicate clearly and persuasively in writing, speech, and multimodal forms; the ability to work and solve problems collaboratively with peers; and the ability and confidence to convey specialized knowledge to diverse audiences.

The Rhetoric Studio combines Hampden-Sydney’s Writing and Speaking Centers and adds a third component: Digital Rhetoric, communication that is composed, created, and distributed through multimedia platforms.

It features an interactive, collaborative, and high-energy environment where students and consultants can work together using state-of-the art technologies.

Student Body Secretary-Treasurer Matt Marsh '22 says having a community to depend on at H-SC has made a big impact on him, and now he's giving back.