View the latest issues of The Record, the official alumni magazine of Hampden-Sydney College. 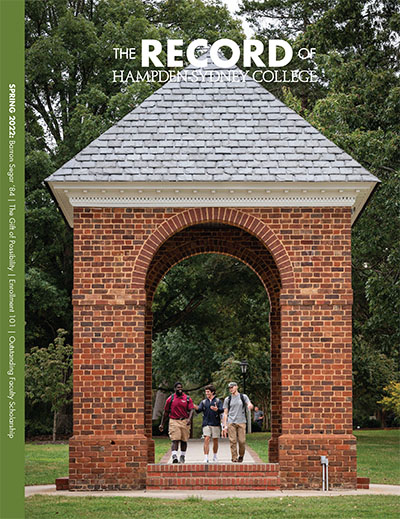 Barron Segar ’84: A Victor of Circumstance

In January of 2020, Barron Segar ’84 stepped into his dream job as president and chief executive officer of World Food Program USA. Based in Washington, D.C., World Food Program USA mobilizes American policymakers, businesses, and individuals to support the United Nations World Food Programme’s mission to end global hunger by 2030. In his first 18 months at the helm, Segar ushered in a period of unprecedented organizational and charitable growth.

Enrollment is a popular topic in the world of higher education. To learn more about broader enrollment trends and Hampden-Sydney’s approach to recruiting, the Record recently caught up with Vice President for Enrollment Jeff Norris and Dean of Admission Jason Ferguson ’96.

The Gift of Possibility

The life of the late Dr. W. Glenn Hurt ’60 was defined by giving. Generous with his talents, he was a devoted physician. Generous with his time, he mentored and advised scores of Hampden-Sydney men as they considered and pursued careers in the medical profession–not to mention generations of students at the Virginia Commonwealth University School of Medicine, where he was a longtime professor of obstetrics and gynecology. And generous with his heart, Dr. Hurt humbly made a Hampden-Sydney education possible for many young men through his philanthropic support of the College’s scholarship endowment, as well as providing generous support for other campus priorities, such as the new Pauley Science Center.

When Mike Daum ’23 stepped onto Hellmuth-Gibson Field for the first time on February 8, 2020, he looked just like the rest of his teammates: lacrosse stick in hand, helmet and pads on, sporting a white jersey emblazoned with "Tigers" in garnet. This freshman couldn’t have been more different than the men he took the field with, though. Mike was already 24; he was married; and he had seen far more dangerous battle than they would face against Mary Washington that day.

They say "you can do anything with a degree from Hampden-Sydney," and our alumni prove that.

Browse through past issues of The Record, the alumni magazine of Hampden-Sydney College.