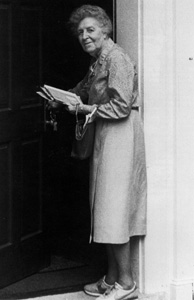 The founder of the Museum, Esther Thomas Atkinson-"Mrs. P.T." as she was universally known, lived at Hampden-Sydney for almost a third of its existence. She came to campus before 1916 and stayed as the wife of Paul Tulane Atkinson, who would become Treasurer of the College. Alarmed by the gradual loss of College history, Mrs. Atkinson began collecting memorabilia.

It was on Homecoming Day 1968 that Mrs. Atkinson displayed a few of her personal momentos on a table in the Parents and Friends Lounge of Venable Hall, thus beginning the effort to collect, restore, and preserve tangible objects reflecting the history of the College. Two years later, the growing collection moved to a spare room in the east end of Bagby Hall, accessible only through the classroom next door. In 1970, the Museum Board was established to set policies and to oversee the development of the Museum.

In 1976, the College Post Office moved into Graham Hall, thus leaving a new home for the Museum and its collection which was renovated for its new purpose. An exhibition was installed commemorating the rich history of the College and a small space in the rear of the building was used for storage. In 1982, the Museum was officially named the Esther Thomas Atkinson Museum of Hampden-Sydney College, and the Museum Associates was established. In 1990, the Student Museum Board, a group of student volunteers to help staff and care for the Museum objects, was established.

As the collection grew, the recognition for additional space was becoming more apparent, both for special exhibitions and storage of objects. In 1993, after a number of existing buildings were considered, the Museum and College Boards made the decision to build on an addition to the existing building. The building was not increased only exhibition space, but also storage space that allowed for a work area. In 1995, the storage and work area was named the Graves H. and Leila B. Thompson Conservation and Collections Center in honor of the two dedicated volunteers at the Museum.

Mrs. Atkinson died on Commencement Day, May 8, 1994, just two months before her 100th birthday. Mary Carroll Herdegen was engaged as the new Director-Curator of the Museum in the fall of 1994 and was instrumental in adding extensive educational programming for students in area schools and colleges.

Chairmen of the Museum Board

The Esther Thomas Atkinson Museum supports the College's mission to form good men and good citizens in an atmosphere of sound learning by collecting, preserving and interpreting objects that enhance the College's educational offerings and promotes the history of the College and its roll in the history of Virginia and our nation.

The Museum achieves its mission by: