On Saturday, April 24, 2021, the Class of 2020 finally returned to the Hill to enjoy a long-awaited and well-deserved commencement ceremony on the lawn of Venable Hall. 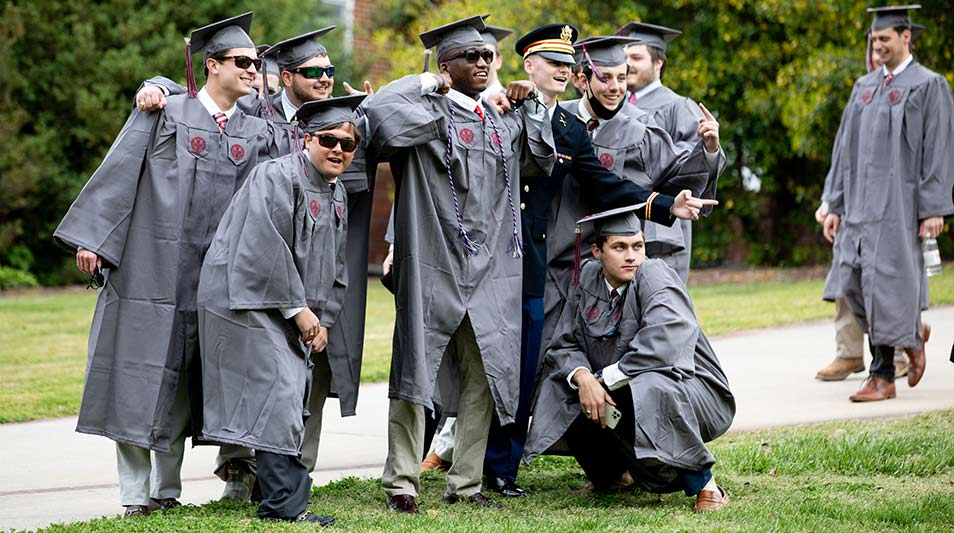 While the 232 members of Hampden-Sydney College Class of 2020 technically joined the nation’s No. 2 alumni network a year ago, their original commencement exercises were postponed multiple times by the COVID-19 pandemic. On Saturday, April 24, 2021, 173 of these accomplished young men finally returned to the Hill to enjoy a long-awaited and well-deserved commencement ceremony on the lawn of Venable Hall.

In greeting the assembled guests, President Larry Stimpert recalled that the arrival of this class as freshmen coincided with his arrival as president: “We came to this special place at the same time in 2016, and I had the privilege of watching you become the good men and good citizens this College forms during our four years together.”

Stimpert saluted the many accomplishments of the class before noting, “And yet, there is something much more to your experience here that a typical list of accomplishments can’t capture—and that is the brotherhood of Hampden-Sydney men.”

President Stimpert was followed by 2020 valedictorian and Gammon Cup honoree Eli Strong ’20, who reflected on the “crazy year” that has transpired since the members of this class were last together. Now in medical school at George Washington University, Strong saluted his classmates for their commitment to helping each other succeed, as well as their willingness to respectfully debate complex issues. 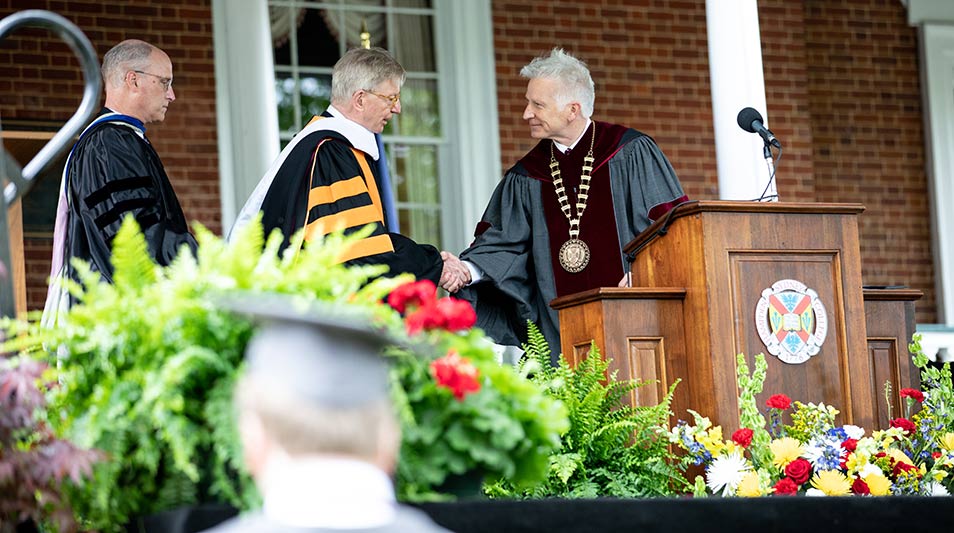 “Hampden-Sydney creates good men and good citizens — citizens who are ready to contribute to society in this manner,” Strong said. “I have witnessed that firsthand from the Class of 2020, and I am proud to call you all my brothers. I have no doubt that many of you will go out from here and live extremely successful lives, but do so with the honor and integrity that is so important to us here on the Hill.”

The 2020 commencement speaker was political theorist, New York Times best-selling author, and Pulitzer Prize-winning columnist George Will, whose remarks were titled “You Are Now Among the Elite. Get Over It.”

“Today you join — you really have no choice about it — the American elite.” Dr. Will told the members of the Class of 2020. “I urge you to embrace that membership unapologetically, proudly. And to live up to its responsibilities.”

Dr. Will reminded the graduates that “few, very few, enjoy the privilege of the kind of quality education that you have received,” and encouraged them to “wear your difference not with vanity or haughtiness, but with quiet pride and confidence.”

Dr. Will was awarded an honorary degree as part of the ceremony. His full remarks can be found here.

Few, very few, enjoy the privilege of the kind of quality education that you have received. Wear your difference not with vanity or haughtiness, but with quiet pride and confidence. 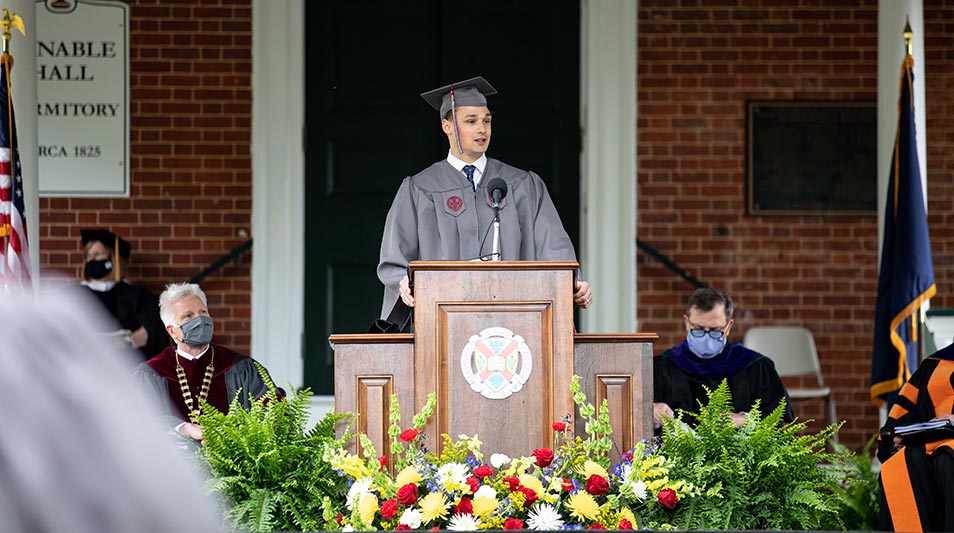 In addition to being the class valedictorian, Eli Strong ’20 was the 2020 recipient of the Gammon Cup, awarded to the student-athlete in the graduating class who has best served the College.

The Anna Carrington Harrison Award, given to the student who shows the most constructive leadership in a school year, was awarded to  Zachary Arthur White ’20, a Venable Scholar, resident advisor, and dean’s list student who received the Sally Wright Harrison Poetry Award in 2018 and who served as president of Unity Alliance during his senior year.

The Samuel S. Jones Phi Beta Kappa Award, which recognizes intellectual excellence as manifested in outstanding student research, was awarded to  Garnet Sinclair Crocker ‘20 for his translation of part of the Anti-Lucretius by Cardinal Melchoir de Polignac with associated translator’s notes.

The Algernon Sydney Sullivan Medallion, which honors students and friends of the College for character and service to Hampden-Sydney, was awarded to two members of the Class of 2020:

The Cabell Award, given annually to a faculty member in recognition of outstanding classroom contribution to the education of Christian young men, was awarded to Elliot Professor of Economics and Business Saranna Thornton.

The Thomas Edward Crawley Award, which is awarded to a professor "most distinguished for devoted service to the ideals of Hampden-Sydney and the education of her sons," was given to Elliott Professor of English Evan Davis.

Benton Reed Anderson ‘20, the 2019-20 student body president, presented the Senior Class Award to Associate Professor of Physics and Astronomy Hugh O. “Trey” Thurman III. The award is given to a member of the College’s faculty, administration, or staff who in the eyes of the class members has contributed during their four years most significantly to the College, its students, and the community.

In addition, two other graduates from the Class of 2020 have gone on to serve in the military: John Walker Dyke ‘20 and Jackson Peter Rush ’20.