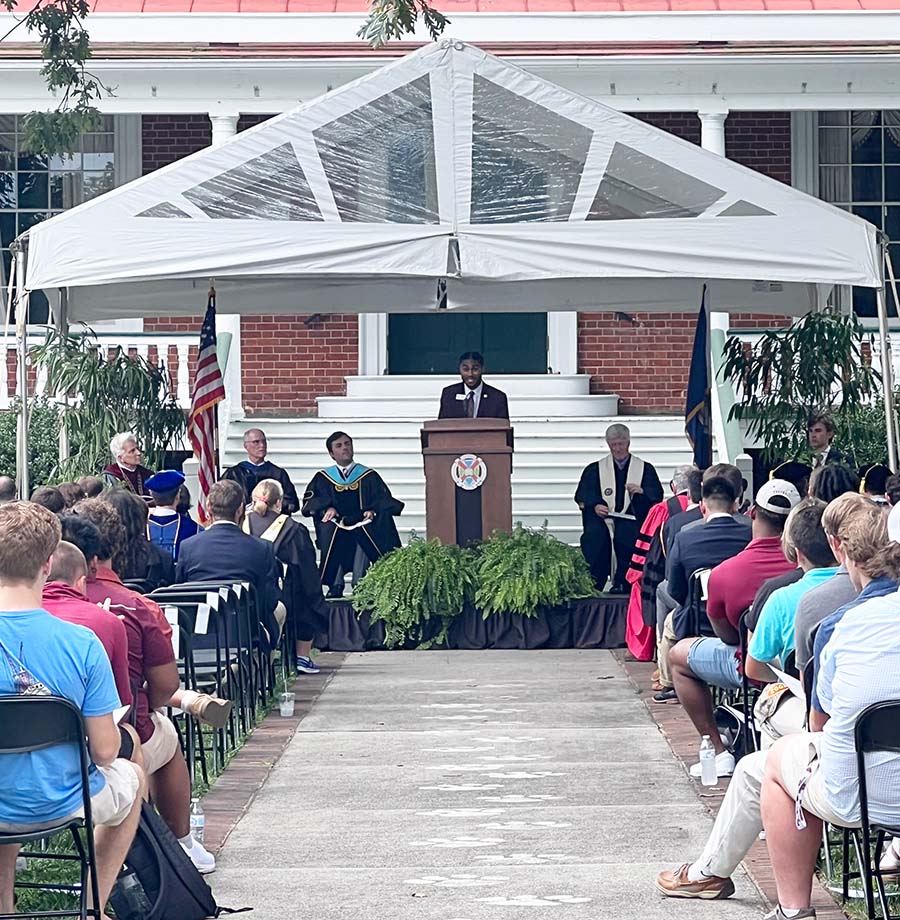 In the program’s first order of business, President Larry Stimpert administered the oaths of office for new student government officers and members of the Student Senate and Student Court. The program also celebrated the academic achievements of eight students (listed below).

“At Hampden-Sydney, we take every aspect of your experience here very personally,” Dean Pantele said. “We value your uniqueness and we treasure your individual contribution to our campus life, and we expect each of you, in turn, to value the great gift of being a student on this campus and embracing your narrow path to becoming your own version of a Hampden-Sydney man.”

Dean Pantele also posed an idea: “I would like the theme of this academic year to be ‘Becoming a Man of Consequence’ — someone who uses the knowledge gained through his experience at Hampden-Sydney to better his own life and the lives of others. Please keep this charge in the front of your mind in all that you do.”

In addition to welcoming the newest members of the student body, Student Body President Grimes saluted what he called “the most unique aspect of Hampden-Sydney”: the brotherhood. Grimes also challenged his fellow seniors to champion each other. “Look to your left, and look to your right,” he said. “Sitting next to you is your brother. And you have an obligation to do everything you can to help them along their path, and to help them grow. I expect to see all of us seniors at graduation, so let’s keep growing together.”

We value your uniqueness and we treasure your individual contribution to our campus life, and we expect each of you, in turn, to value the great gift of being a student on this campus and embracing your narrow path to becoming your own version of a Hampden-Sydney man.

President Stimpert’s convocation address emphasized the importance of having a high purpose. In addition to encouraging students to both commit to a purpose and pursue it with discipline, Stimpert acknowledged the collective purpose each member of the Hampden-Sydney community has to the institution. “A purpose is an essential part of being a good man and a good citizen,” he said. “For our founders, that word ‘good’ in our mission meant not only being a ‘good person’ as we understand that phrase today, but it also meant a willingness to serve to a bigger cause than self; it meant being a contributor.”

“Remembering the final passage of scripture that Andrew Parker read for us this afternoon, we have not only an opportunity but a responsibility to work together to create here a great shining light on a hill that can be a tribute to an institution dedicated to bringing out all the best that young men are capable of achieving,” Stimpert concluded. “Let our collective light shine, that we may see our good works, and this College may serve as an example of all that is best in higher education.”

Dean of the Faculty Walter M. McDermott and President Stimpert presented awards to the following students in recognition of academic and extracurricular excellence:

Kenten J. Bero ’25 received the Omicron Delta Kappa Award, given to a member of the sophomore class who demonstrated real leadership potential during his freshman year.

Patrick Robert Strite ’24 received the President's Award for Scholarship and Character, which is presented to a junior who has excelled in the classroom at Hampden-Sydney and who demonstrates the quality of character that enriches the life of the campus community.

Taylor James McGee ’23 received the President’s Award for Academic Excellence in the Natural Sciences and Mathematics.

Congratulations to these award recipients, and here’s a wonderful year at Hampden-Sydney College.