Bringing Rhetoric to Life: Exploring Identity and Meaning Through Travel

The fall 2021 offering of Rhetoric and Culture (RHET 370) with Professor of Rhetoric Claire Deal helps students gain a deeper understanding of the ways rhetoric can constitute identity and meaning within the concept of place. 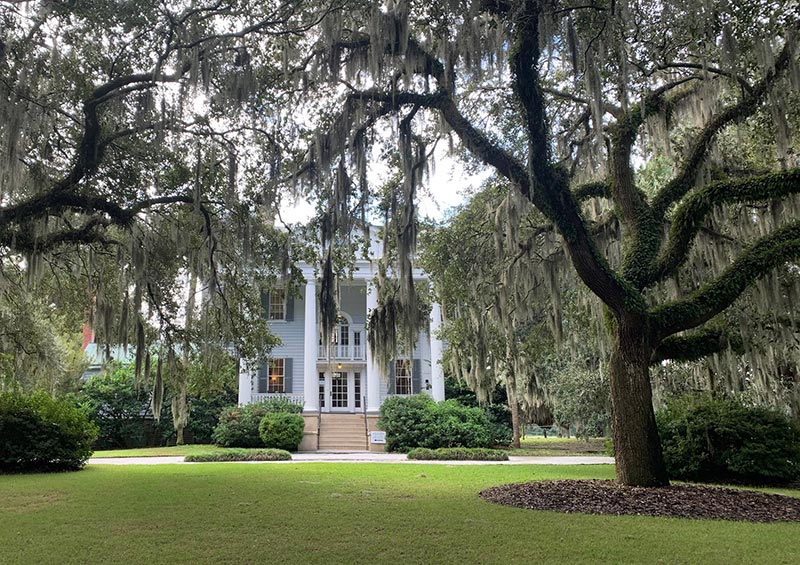 Part of Compass—the College’s experiential learning program—this semester’s session of Rhetoric and Culture combined traditional classroom time with hands-on encounters in the South Carolina Low Country and the Georgia Sea Islands guided by themes of power, romance, and isolation. Deal explains that “this course is perfect for students who thrive in immersive learning environments because it is not only intellectually immersive but also physically immersive, which brings the discipline of rhetoric to life.”

Prior to leaving the Hill, the lecture portion within the classroom focused on supplying students with critical background knowledge. As Professor Deal explains, “By the time we left for the trip, we had six weeks of class time where we really laid the groundwork for the rhetorical concepts that we applied on our journey: what is rhetoric? How does it work? What are the functions of it? It can create meaning; it can maintain an idea or meaning; it can move us to action. This foundational knowledge really prepared students for the mindset of the trip.”

Each student then took ownership for a portion of the trip—researching, developing, and presenting to the class possible activities and experiences before departure. Joshua Hall ’22 said, “I picked the class because it sounded like a good way to experience a part of the country that I never have before. Being from New Jersey and going that far south for the first time, I almost didn’t even feel like I was in America anymore to some extent.”

This course is perfect for students who thrive in immersive learning environments because it is not only intellectually immersive but also physically immersive, which brings the discipline of rhetoric to life.

During their time in South Carolina and Georgia, students engaged in activities ranging from outdoor adventures kayaking in the ACE Basin Estuary to visiting historically significant locations such as Civil War sites in Beaufort, South Carolina, and McLeod Plantation in Charleston, South Carolina, to exploring the Gullah Geechee culture. Alumnus Carter Hudgins ‘00 also welcomed the group to Drayton Hall for a tour of the 18th century estate, where he serves as president and CEO. These experiences were specifically curated to explore how the use of rhetoric creates an idea of place. Through these opportunities, students gained knowledge and perspective about the historical context of the sites they visited as well as the culture of the people.

“Our trip to Savannah, Georgia, especially the town center, really stuck out to me because it was a very heavy place. It used to be a slave market, but today you see lots of tourists walking around having fun. It’s interesting because you are standing on grounds where people were once hung or whipped. It got to me,” states Jordan Fields ’22.

Upon their return, students used the remaining course time to combine their materials and perspectives to create a blog documenting the experiences they had and the knowledge that they gained during their excursion. Students also hosted a showcase displaying multimedia representations of their experiences November 30 through December 2 in the Birdsong Atrium of the Pannill Center for Rhetoric and Communication.