Tigers in the Wild

Four Hampden-Sydney College seniors spent their last days of summer on a 10-day adventure soaking up the splendor of the Alaskan wilderness. 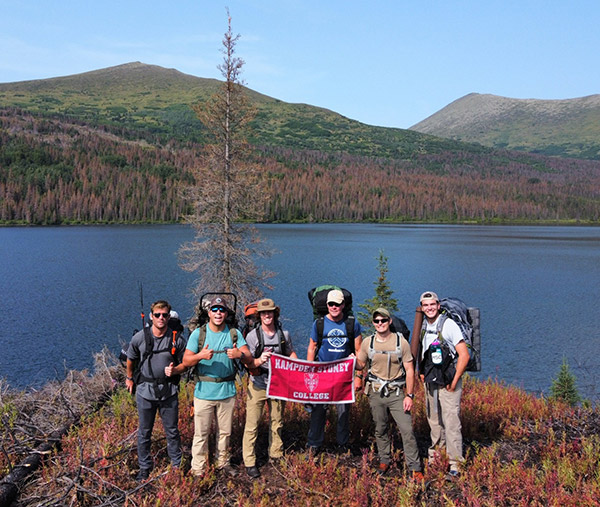 As the slowness of summer break began its inevitable quickening into the busy-ness of a new school year, four members of Hampden-Sydney’s Outsiders Club made the most of their last days of freedom in the last frontier. Seniors Dane Warner, Jake Beavers, Jake Brown, and Dave Lowman took on the Alaskan Chugach wilderness on a 10-day backcountry hiking and sea kayaking excursion led by Sporting Clays Team Coach Ned Horton ’12 and Director of High Adventure Scott Schmolesky.

“August is gold in Alaska,” says Horton—who has 11 Alaskan backcountry trips under his belt. “The salmon are running. It’s bear-viewing and berry-picking season. The splendor of Alaska is on full display.”

Upon arrival in Anchorage, the expedition spent one day provisioning—acquiring and organizing critical supplies such as camp stoves and fuel, freeze-dried meals, sleep supplies, water filtration system, and personal warming items. The students got a great lesson in adapting and overcoming setbacks after one student’s bags were lost by the airline, having to source the items that were misplaced while letting go of the frustration.

With their packs loaded, the group tackled 50 miles on Resurrection Pass Trail over four days—gaining several thousand feet of elevation and passing from spruce and birch forest to alpine tundra. “I really wanted the pace to be approaching intense those first couple of days to not only set the bar high, but also to get the toughest bit of terrain out of the way,” Horton says. With that in mind, the group set a grueling pace on day one, covering 17 miles with 50-pound packs in just eight-and-a-half hours.

After another day of provisioning to resupply and switch from packs to drybags, the group set out for two days of kayaking in Prince William Sound. An incoming weather system forced the expedition to cut a half-day of kayaking for safety, but the experience was not sullied in the slightest.

We got to see landscapes that I had previously seen only in photographs—that I now know can’t do the real deal justice. We connected with nature by living off the natural resources provided to us while learning the importance of proper planning and working as a team. 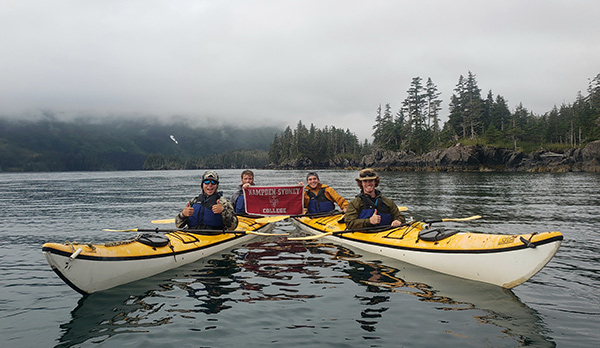 "This trip was an eye-opening experience of how wild nature can be,” says Dane. “We got to see landscapes that I had previously seen only in photographs—that I now know can’t do the real deal justice. We connected with nature by living off the natural resources provided to us while learning the importance of proper planning and working as a team.”

The guys caught pink salmon and trout and grilled them over a campfire, foraged for berries, and encountered wildlife of all kinds—including a family of black bears and a caribou mule on their final day of hiking.

“The trip consisted of a great deal of physical activity that enlightened me to the fact that the limits of the human body far exceed what I initially thought they were,” Dane admits. “Every aspect of the trip was well planned out and accounted for any sort of issues that could potentially arise within an excursion of this nature. I felt that we were left in good hands with Ned and Scott and that the group's overall safety was their top concern. I hope that future groups can have the opportunity to access this awesome experience.”

And as if Alaska hadn’t charmed the intrepid explorers enough, they were treated to aurora views on the flight out from Anchorage to Seattle—an unseasonably early sighting of the phenomenon—and as Horton puts it, “A fitting end to a great trip.”