Through the devastation of losing loved ones and the helplessness of being half a world away, Yevhen (Zhenya) Goncharov ’13 and his wife have put their careers on hold to help provide protective and rescue gear for the civilians in his Ukranian hometown. 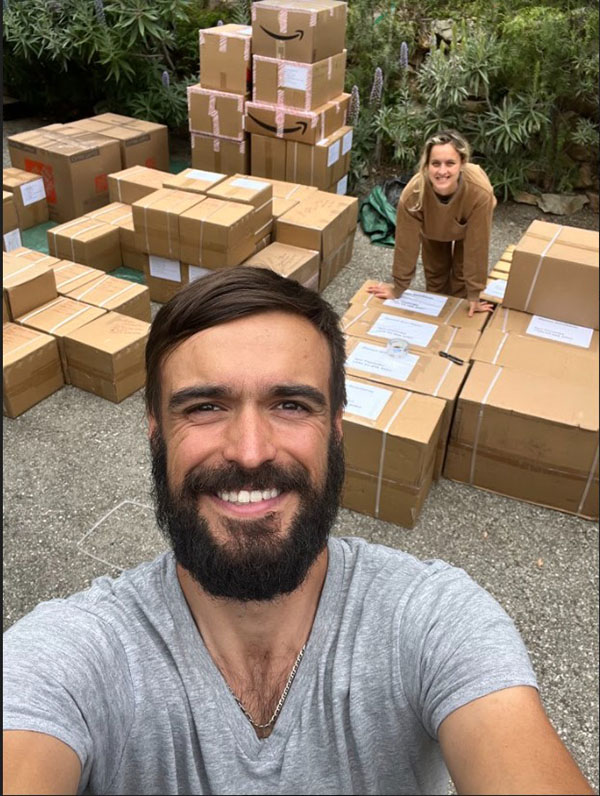 “Seeing my childhood friends who are civilians wearing bulletproof vests stopped me in my tracks,” says Yevhen (Zhenya) Goncharov ’13. The Irpin, Ukraine native and his wife, Lily, have put their lives and careers on hold to support their countrymen and women from afar. Taking a leave of absence from his Silicon Valley data science job and from her job as a nurse, the Goncharovs have been running on three hours of sleep a night and fielding hundreds of phone calls a day for the past four weeks raising awareness and funds to provide protective and rescue gear for the civilians in Yevhen’s hometown.

“When Lily gave me her blessing to do whatever I felt I needed to do to help, something exploded inside of me,” Yevhen says. Describing it as a “go green” moment, Yevhen leapt into action to identify how he could be the most impactful. After getting in touch with friends on the ground in Irpin, the Goncharovs discovered that the most pressing need is for protective gear like bulletproof vests and helmets to protect both those staying behind to help with evacuation efforts as well as those fleeing the war-torn city. One person put it this way: “We are thankful for blankets and crackers, but they are not going to protect us from flying bullets.”

Having identified the need, the Goncharovs called the closest dealer they could find and personally bought 14 bulletproof vests and 10 medical kits and sent them to Irpin. It was a start, but it wasn’t enough. After seeing his friends bravely remain behind to protect their hometown, Yevhen knew he had to do more. In three days, the Goncharovs raised $50,000, sent 200 more vests to Ukraine, and gave their cause a name—the Irpin Defense Aid (IDA).

“We’re focused on saving lives, not taking lives,” says Lily. “All of our guys on the ground are on the same page. It breaks my heart knowing that these young men who are risking their lives to help are out there unprotected.” All of the gear the IDA is sourcing is meant for defensive operations and rescue missions: vests for drivers and volunteers located in defense positions, drones, radios, medical kits, and thermal sights. To date, the efforts of the Goncharovs and the IDA team along with their friends and family at the Irpin Bible Church have helped evacuate 12,000 people. But there are an estimated 3,000 elderly people stuck in basements and makeshift bomb shelters whom they can’t reach, along with countless animals. Their mission is far from complete.

As the need grows and their operation gains support, the Goncharovs have begun partnering with logistics companies and equipment manufacturers who also want to help the people of Ukraine. They are currently working with Sig Sauer to source thermal sights that will help rescuers locate people trapped in rubble. As of the writing of this article, a plane furnished by a logistics company containing medical kits and 450 bulletproof vests is awaiting clearance to make its way to Ukraine. “The hardest part is waiting for the paperwork and the documentation and the logistics to clear because I know if we don’t get them out the door, we’re going to lose another guy,” Yevhen says.

When we talk to the people on the ground, we get encouraged. Even though they’re going through such a tough situation, they’re still so hopeful. That gives us energy. If they’re out there on the frontlines, we’re going to do everything that we can from here to help them. 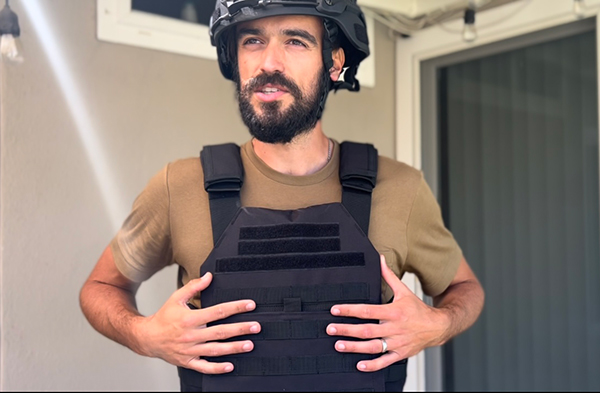 Unfortunately, this is not simply a fear or threatening possibility; it has already become reality. Family friend and member of the Irpin Bible Church—which Yevhen’s father started 25 years ago—Anatoly Berezhnyi had escorted his wife to western Ukraine before returning to Irpin to help other townspeople evacuate. On March 26, he was helping a mother and her two children escape when a mortar struck as they were crossing a bridge over the Irpin River. All four Ukrainians were killed instantly. That second shipment of 200 vests was on its way, but it didn’t make it in time to save Anatoly or the Perebyinis family.

Through the devastation of losing loved ones and the helplessness of being half a world away, Yevhen finds his strength to continue from the fellow Ukrainians and others who want to help. “There were days early on that I wanted to wrap it up because it takes such a toll,” he admits. “But the momentum is there and the people are being helped in practical ways. There’s no turning back at this point.”
Lily concurs: “When we talk to the people on the ground, we get encouraged. Even though they’re going through such a tough situation, they’re still so hopeful. That gives us energy. If they’re out there on the frontlines, we’re going to do everything that we can from here to help them.”

And they are in fact helping. On March 28, CNN and other international news outlets began reporting that the town of Irpin had been taken back thanks to the efforts of both Ukrainian military forces and the townspeople themselves.
“We took our town back, so we did something effective,” says Yevhen, brimming with pride. “Let’s go get another town back. It’s not on one person to do this. It’s a collective effort. Just by sharing a link, you could be saving a life.”

How to Help
Hundreds of people in Irpin and surrounding cities under attack still need evacuation. You can help the Irpin Defense Aid and its partner Irpin Bible Church purchase life-saving defensive and rescue equipment. Under the ongoing threat of war, the brave civilians staying behind to help the evacuation efforts are in dire need of boots, flashlights, walkie-talkies, fuel, bulletproof vests, thermal sights, helmets, night vision, power banks, as well as basic essentials such as medical help, food, and lodging. 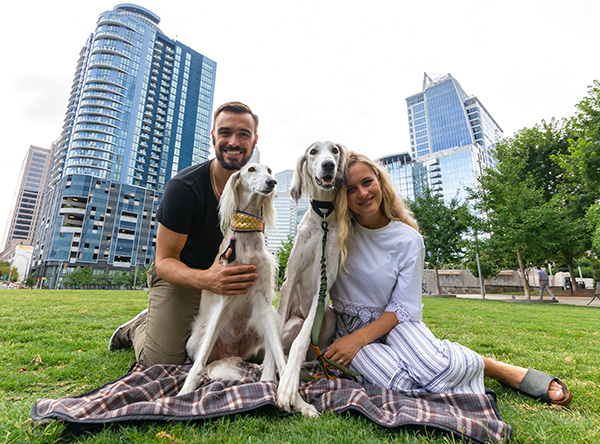 About Yevhen
Yehven Goncharov graduated from Hampden-Sydney in 2013 with a B.A. in mathematical economics, and later received a management certification from Wake Forest University and a master’s in data science and business analytics from the University of North Carolina at Charlotte. Since graduating, he has held roles in the banking industry at both Bank of America and Wells Fargo and has most recently served as a data science consultant with Karius.