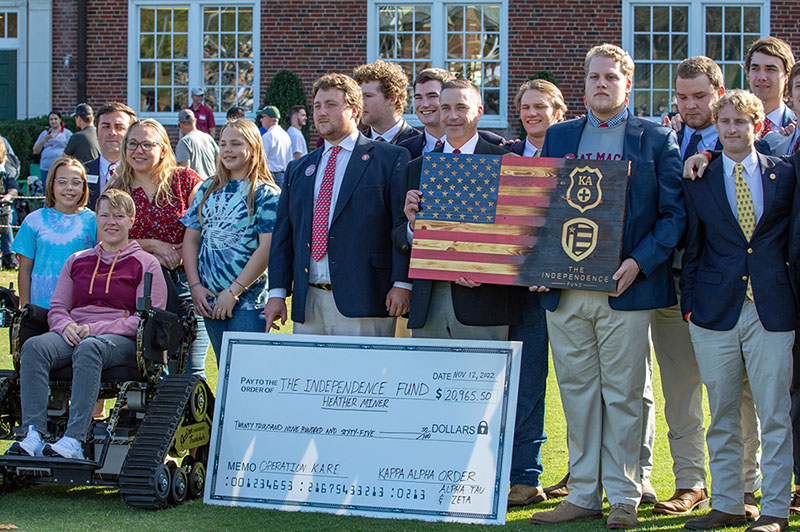 The Hampden-Sydney community gathered on the Hill on November 12 to witness the excitement of the oldest small-school rivalry in the South as H-SC faced off against Randolph-Macon in the 127th edition of “The Game.” Though competition between the schools was fierce on the field, Hampden-Sydney’s Alpha Tau chapter and Randolph-Macon’s Zeta chapter of Kappa Alpha proved that teamwork is the real name of the game.

During the spring 2022 semester, the neighboring Kappa Alpha Order chapters teamed up with the Independence Fund, a non-profit organization dedicated to aiding veterans and their families through programs and services, to participate in Operation KARE. Operation KARE (Knowledge, Awareness, Results, and Empowerment) is a Kappa Alpha Order track chair initiative that began with the Zeta Phi chapter at High Point University in 2016. The Alpha Tau and Zeta chapters challenged each other to raise $10,000 by the end of the summer. Both chapters surpassed that and together raised over $20,000. The chapters now rank first and second in the country for the number of brothers who donated and for money raised for this initiative.

Former Alpha Tau chapter president Dominic Pastore ’23 says that he thought of teaming up with R-MC while all the chapter presidents from Kappa Alpha Order were together during a leadership conference: “I thought about the opportunity to present the track chair at “The Game.” Randolph-Macon and Hampden-Sydney have similar chapter sizes, which made it more manageable. I discussed the opportunity with the Randolph-Macon president, and he was on board with it.”

Seeing the dedication from both colleges, Army veteran and Alpha Tau alum Dwayne Bowyer ’92, associate dean of students for student conduct and character and director of Greek life, says, “I thought it was very special that both chapters could come together at “The Game” and show that smaller organizations can make a big impact.” Bowyer noted the philanthropic importance of assisting the community and how Kappa Alpha Order is a prime example of Hampden-Sydney’s mission to form good men and good citizens.

I thought it was very special that both chapters could come together at “The Game” and show that smaller organizations can make a big impact.

Pastore expressed appreciation to Bowyer for his determined efforts and assistance with the initiative, saying, “We came together intending to make someone’s life better, and we hope to continue doing this each year going forward.”

Heather served in the Navy before retiring due to a spinal cord injury. Heather enlisted in 2003 and was stationed in Japan on the USS Essex for 14 months before being deployed to help in Operation Iraqi Freedom, where she became injured on the ship during active duty. Though the injury caused Heather to lose her lower body function, her spirits remain high. With her new track chair, Heather can continue living life to the fullest and being involved with her family in all ways possible. We thank Heather for her dedication and service to our country.

Thank you to the H-SC Alpha Tau chapter and the R-MC Zeta chapter for going above and beyond to support this great cause, and thank you to those who donated in support of Operation KARE.