On September 6, 2019, Hampden-Sydney College received a gift of $30 million from Mr. Stanley F. Pauley via The Pauley Family Foundation. This transformational gift, the largest in the College’s history, supports the construction of a new, state-of-the-art science facility, named the Pauley Science Center. It has been among the most ambitious construction projects in the College’s history. The facility includes state-of-the-art classrooms, laboratories, equipment, and interactive spaces to support first-class science teaching, research, and scholarly activity. It launches the future of the sciences at Hampden-Sydney College.

I am inspired by the College’s unwavering 244-year commitment to scientific literacy and preparing its graduates for career success, advancing scientific progress, and contributing to our society’s well-being. I am thrilled to invest in an institution that is making a real difference, a college that represents the best of American higher education.

Mr. Pauley was the Chairman and Chief Executive Officer of Carpenter Co., a large producer of polyurethane materials. Carpenter Co. was founded by E. Rhodes Carpenter, a member of the Hampden-Sydney College class of 1929. Through The Pauley Family Foundation, Mr. Pauley was a generous benefactor of many important educational and arts institutions and a former member of the Hampden-Sydney board of trustees. Mr. Pauley passed away in 2020 at the age of 93.

The estimated total cost of the project exceeds $40 million. Efforts are underway to raise the additional support needed for this project.

The Pauley Science Center’s exterior design will fit naturally into both the campus landscape and the Federal-style architecture that are among Hampden-Sydney’s most distinguishing features. The approximately 73,000-square-foot facility will include state-of-the-art classrooms, laboratories, equipment, and interactive spaces to support first-class science teaching, research, and scholarly activity.

The Pauley Science Center will be built on the northwest corner of College Road and Via Sacra, showcasing Hampden-Sydney’s commitment to science education in the heart of its historic campus.

The project’s scope necessitates the removal of the aging Bagby Hall, the College’s first science facility, which would have required substantial restoration to remain operational beyond the immediate future. The project will restore the historic sightline between Cushing and Venable, an intentional design element when those buildings were constructed in the 1820s. Every effort is being made to reclaim and re-use materials from Bagby, including the cupola, which will be incorporated into the new building’s landscape. During the spring of 2020, three classes conducted careful architectural, photographic, and oral history documentation of the building. Hampden-Sydney’s current science facility, Gilmer Hall, will be renovated to support other academic programs and priorities.

The construction of a new science facility addresses one of the College’s most strategic priorities, and the Pauley Science Center will transform the education and research opportunities the College is able to offer students.

The planning process carefully considered several potential building sites, harnessing the expertise and input of architects, engineers, builders, and members of the Hampden-Sydney community to identify the pros and cons of each option. The site analysis included extensive consultation with the Virginia Department of Historic Resources and with the experts who have helped the College prepare and file past historic preservation zone applications. Though it was proposed decades ago in a fifty-year-old campus master plan that a science facility be located on the western edge of Lake Chalgrove, that site was not considered feasible due to the challenges associated with constructing a large building behind the dam. And, in fact, two subsequent campus master plans—one completed in 1999 and a second completed in 2012—have not proposed building at that site.

Ultimately, it became clear that the location at the intersection of College Road and Via Sacra was the best option. Placing this incredible facility in the heart of this historic campus showcases Hampden-Sydney’s commitment to its educational mission and the teaching of science.

The decision to remove Bagby Hall was not made lightly. While a number of temporary fixes over the years have enabled Bagby to remain operational, it illustrates the detrimental impacts of deferred maintenance, and a careful review determined that, at a minimum, an additional investment of $5 million to $10 million would be required to restore Bagby. And, even then, the College couldn’t be certain that the building would survive a major renovation without extensive shoring-up of the foundation, which has been inundated by water for decades. Moreover, once a new science facility is built and Gilmer is repurposed for other disciplines, Bagby would have become unneeded space and costly to maintain.

The leadership of Hampden-Sydney is fully committed to preserving the architectural heritage and historic aesthetic of our beautiful campus. The College will soon begin a year-long interior renovation of Venable Hall, addressing structural and HVAC issues while also renovating bathroom facilities, student rooms, and the Parents & Friends Lounge. Cushing Hall received a similar renovation in 2019. The historic Carriage House on campus is also being restored. And in 2017, the College completed an extensive renovation of Winston—now Brinkley Hall—which now houses the state-of-the-art Viar-Christ Center for the Arts. Hampden-Sydney is also committed to a thoughtful renovation of Gilmer Hall once the science departments move to the new Pauley Science Center. 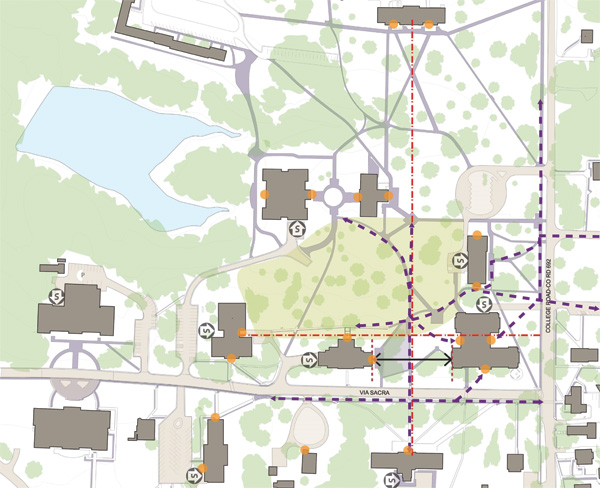 At left, an overhead site map shows the restored historical axis. The project will re-open the original sightline between Venable Hall and Cushing Hall, a key element of the College’s historic footprint.