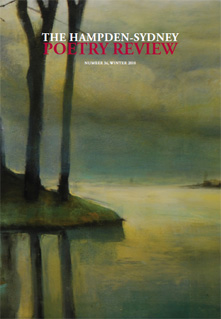 Issue 36 of the Hampden-Sydney Poetry Review continues our tradition of publishing the best verse we can find.  The issue includes new work from D.A. Powell, Don Bogen, Lisa Jarnot, Todd Boss, Norman Dubie and many others.  We are happy also to feature four unpublished poems by John Haines, who before heading to Alaska as a young man, was born in Virginia.  This year's 4x4 touches on the political and the personal, and features responses from Debra Kang Dean, Jaime Brunton, D.A. Powell, and Christopher Howell.

The Day the Field Burst Into Flame: Another View

I think of old Mrs. Johanssen walking past
on her journey to and from the store each day
at dusk., and my mind follows the shadows behind her
thrashing as though the sudden trees were running
for their lives

as we had run
up onto my grandmother's porch
for shelter that day in 1951. Could you see this
picture, you might see too the huge
field of weeds and scotch broom
explode, a great hammer of smoke and flame rising
to smite the neighboring fields, Mrs.
Johanssen throwing both shopping bags
over her head and sprinting like a supersonic gnome.

You might turn as we did and find God
right there
playing pinochle with the others, calling out
the tricks and trumps until a wild
wind of blue-tinged rain slashes out of the west
soaking the firemen and the fire
coughs and dies
and He says, "See?"

An estimable sleep may have reached us all
after that. If we are nothing
but this sleep, how
should I know? I'm mortal and was dying
to believe
in the fearless man who sees the form of God

blur and diminish as it moves off
down the path between the orchard and slouching
barn, and who all his life thinks of this
darkening blue outline as something
inside himself that remains
calm
even as flames roar and grin and he's six years old
again and again.

My house is sinking.
On ceiling and wall
jagged reminders
fork the plaster,
widen in witness
nothing will hide.

My house is sinking,
a hostel for ghosts.
Doors, skewed open,
snag on the floor.
Window frames rattling,
closets unclosed.

Weight of the steps
that creak underfoot,
wood of the banister
rounded and fat--
stairs pull the house down
into the well.

How can I stay here,
watching it fall?
Walls that have cradled
parent and child
jut at crazed angles.
How could I sell?

My house is sinking
attic to basement,
rooms filled with boxes
heavy and frayed.
How can I move when
my heart is old?

Epitaph for a Young Man

I seemed always standing
before a door
to which I had no key,
although I knew it held behind it
a gift for me.

Until one day I closed
my eyes a moment, stretched,
then looked once more.
And not surprised, I did not mind
when the hinges creaked
and, smiling, Death held out
his hand to me.