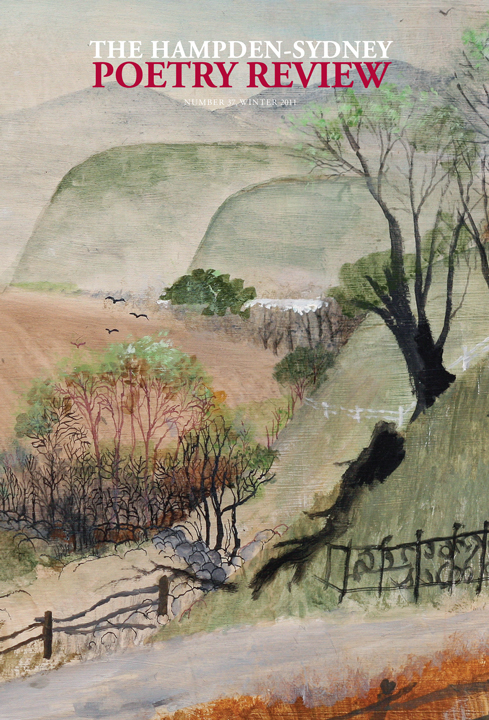 Issue 37 of the Hampden-Sydney Poetry Review was just published in December of 2011.  The issue includes new work from John Kinsella, Lavinia Greenlaw, Billy Collins, Maxince Scates and many others.  We are also happy to have enacted a quiet re-collaboration between our cover artist, the renowned children's book author and illustrator Alice Provensen, and poet Nancy Willard.  This year's 4x4 touches on questions of influence, music and solitude and features responses from Connie Wanek, Reginald Flood, Dennis O'Driscoll, and Lavinia Greenlaw.

Chapter One, Verse One

In the beginning was the word,
and the word was no.
And the word trembled out
over sand and snow.

Over seas and mountains
the word was spread.
Over clay and ash,
remains of the dead.

In the beginning was the word,
and the word was a lie,
and that lie lay hard
under a darkening sky.

Through wind and rain
the word echoed still.
Through wet summer air,
and dry winter chill.

In the beginning was the world,
and it called for a word
with each great crashing wave,
each still, stiffened bird.

Where still bodies lay
and time would defile,
the world needed a word
to help nurture denial.

In the end the word
was only a sound,
a sound no one hears
beneath grass or mound.

You can still hear it now,
endless echoes of no.
And still blows the sand,
still falls the snow.

When I left that house I took a key
to a door I never opened.
It's not the theme that interests me
but the variation.

So much is with me so soon
I lean towards the rest:
the needle's hesitation,
the song caught in the breath.

One day I'll learn to listen
to the city beneath the snow,
the agony in the irony,
the lover as I go.

The first time I heard a singer cry,
"Take me to the bridge," it was not James Brown
but Robert Plant imitating James Brown,
though my knowledge of music-and most things-
ran so shallow I didn't know anyone was
being imitated. Before I knew words could claim
two meanings, my mother told me
her friends were coming over to play bridge.
I envisioned the rust-dotted steel skeletons
that spanned brown water, their surfaces
a series of ridges that hummed
and shook the car. I thought those women would
build models, like the spidery constructions
I improvised with Tinker Toys. I never
learned the card game, which has always seemed
more civilized than poker or hearts,
built as it is on contracts and bidding,
a complex of negotiations endless
as afternoons in those years before I could read
or cross the high grass border of my yard.
I learned the weights and shadows of words,
learned to cross the distance between "bridge"
and "bridge" by repeating adult speech.
And I used that small learning when I could.
During a week at Boy Scout camp
when I was twelve, one project was to build
a rope bridge over a stretch of water,
rover or lake, I forget which.
It took three of our six allotted days
to stretch and anchor an inch-thick rope
over the water. Then, most of us watched
two aspiring Eagle Scouts tie lengths of cord
around the larger rope to secure handrails,
listless despite assurances that we would need
exactly this skill when we went to Viet Nam.
I wasn't about to go to that stupid war,
I finally said, giving all the secondhand reasons why
until I was left in a silence
too deep to measure. While he worked on "The Bridge,"
Hart Crane lived a while in a room facing
Brooklyn Bridge, the same room where
Washington Roebling, the bridge's architect, once lived.
Where barges and steel welded the continuous
curve of the bridge, Crane pondered a poem
whose dream was America, and discovered
no continuum, but a series of islands,
estates divided by time and distance,
infinite constructions we always stand
in the center of. I never saw James Brown
although my wife did. I did see Robert Plant
with Led Zeppelin, a sloppy show, hours late
getting started, that began to convince me
I was, at nineteen, too old to be convinced
by such rock and roll preening. I don't recall
Plant screaming, "Take me to the bridge,
but he might have. My CD collection fills
a closet, sprawls in piles through the house.
Thousands of CDs, many thousands of songs,
and I'm still not sure what purpose
the bridge serves in a song.
"I never write a song without a bridge,"
I heard one songwriter tell another
while I listened as silently as I had listened
to my mother over cards with her friends.
One lit a cigarette, the other poured a drink.
No liquor was offered at my mother's bridge games.
They drank coffee, smoked cigarettes briskly
as they shuffled and bid, their talk inscrutable
as the Morse of stars or fireflies: husbands,
money, a man on the next street who had not worked
for two years, whose son was caught
at the corner market eating food he had
no money for. I knew that boy, larger than me,
torturer of animals and smaller kids, knew the stink
of his trash breath when he twisted my arm
behind my back. Is he a friend of your son's?
a woman asked. My mother nodded,
my first lesson in how things are joined
without being joined. But I began
by speaking of bridges. And if I know anything,
it is the folly of any American writing a poem
called "The Bridge" in the land where
Hart Crane wrote. Like Crane, I am not writing
of one bridge but many, all of them
dissolving into metaphor, our lives,
like history, remembered islands of incident
and occupation. Crane engineered his poem
without any references to card games,
his record collection or antipathy
for old neighbors. Perhaps, like Crane,
I need to discover a bridge to lives
larger than my own. But we write
what is there to write. Last night I read a
a five page poem about the poet's search
for his dog. The poem circled, wandered,
crossed and recrossed its path, exactly
as a dog left to its own devices might.
Hanging over that poem was a memory
of the afternoon I read the same poet
with my friend Garnette. We were in
a diner near campus. The book was hers.
I want to remember that we drank
red wine, but knowing how Garnette-
who I was a little in love with, whose last words
to me were "You must stop drinking"-
felt, we probably drank the thin coffee
that place served, the same coffee
my mother offered her bridge friends.
Leaning forward, Garnette half-whispered,
"Let me read another one" before I took
the book from her, our reading the same
give and take as my mother and her friends.
Garnette is dead from cancer now, her boyfriend
of those years dead as well, from alcohol,
depression, a final inability
to be forgiven. This is history
to no one but myself. I tried calling Garnette once
to tell her I had stopped drinking, but
her number was unlisted. My mother,
as far as I know, has not played bridge in years.
We believe our lives make a shimmering whole,
but revisit moments, each an island
in a series of islands, isolate and come upon
mostly by accident. And now and then
we believe we've reached the place where
the span of the past shines clean and whole
as an architect's plan, a bridge
where the band can vamp, where, finally,
we can complete the structure that lets
music and memory join to make our greatest myth.