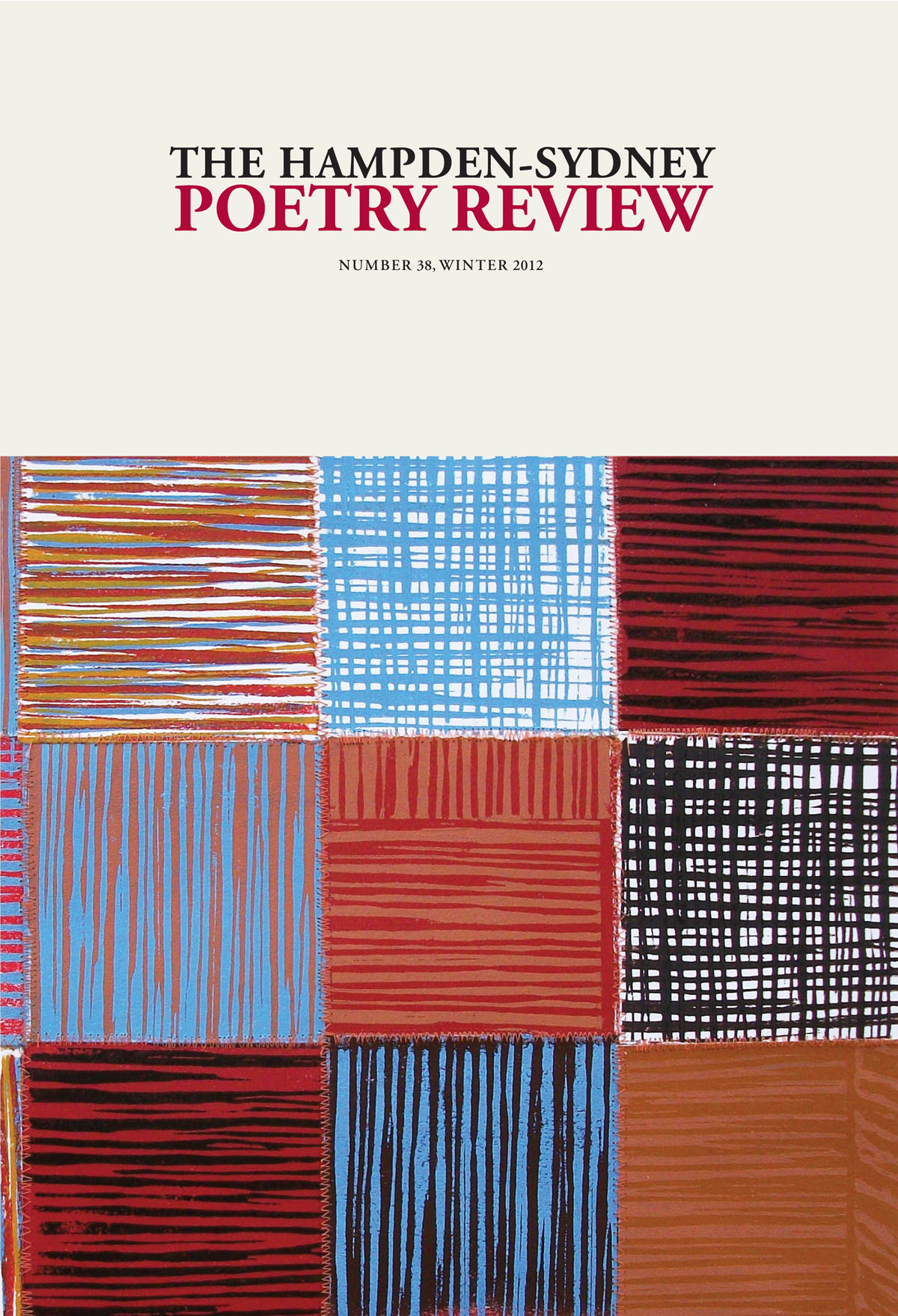 Issue 38 of the Hampden-Sydney Poetry Review was published in December of 2012.  It features new work from Stephen Dunn, Jessica Greenbaum, A.E. Stallings, Eleanor Wilner, Valerie Wohlfeld and many others, including some poets who are publishing for the first time.  Our 4x4 includes a lively exchange on the state of publishing poems as a woman in the current literary marketplace as well as diverse thoughts on many other topics, as has become characteristic of the feature.  Our cover art is by local artist JJ Eisfelder and we're especially happy to have it gathering this year's compelling group of poems.

All he wanted was to lie down with her
on a real bed in a house in which all the terms
were theirs, something he thought reasonable
because nothing else made sense or felt as good.
He had constructed the house as the world
seemed to allow, blueprints true to code,
six steps to the front door, a solid railing
to grip if you might find yourself on some verge,
and a foyer that led to stairs at the top of which
was their bed, a king-size and queen-making
downy bed with pillows monogrammed
Lucky and Hers.

He wished for desire
and deep sleep, and thought the world would comply
because, after all, he was only wishing
for what had been granted to others with lives
like theirs, but the world had a stake
in everything under roof and sun, and an affinity
for the real. It seemed to be waiting for doubts
to arise - a few maybes to lodge in the man's mind.

Their lovemaking was wild and inconsiderate,
windows open, un-neighborly - wonderful,
in other words. When they woke, they were
on the floor, naked and cold. They hadn't fallen,
it was just that the real bed in the real world
had cast them out. Crumpled and stained,
its covers roughly pulled back, hospital corners
loose, it was as if a general lack of respect
had been shown (the man could see that now).

It was uncomfortable on the floor,
and the man hated discomfort. The woman
had prior experience with positions like this.
This is what happens, she told the man,
when someone wants too much what he wants.
But while the woman was desiring
something that felt more like home, the man
was thinking doors and ways out,
an architecture of escape.

The floor
started to creak, complain. He began
to understand that even the most perfect house,
built with sweat and dreams, would never
wholly be theirs. She suggested they build
a smaller house, a house that could
be better controlled, perhaps with a cot
instead of a bed in a tiny room,
and on it quiet love-making the night long.
If the world could smile, it would have.
If the real could speak, it would have said—
perhaps through its teeth—Yes, good,
in time they all settle, come around.

The X crossed is quivered—
barbed or feathered, bound
and centered.

But consider:
once the arrow's drawn it draws
another mark, takes sides,
makes aim, unwavering.

Pulled taut it pushes back
then points and starts aloft,
begins a parting cleaving
seaming of the air

undoing chance by choice
its plunge and strike an arc
that bites and bears no exit mark.

The lot it draws it might defer
at ends, from one to other, point lost
or lodged, a verge transcribed

A Ditty for Persephone

The daffodils peep from the grave
To see if it is spring.
All winter, no one thought them brave,
But now the King and Queen

Put up their pale green periscopes
And open jaundiced eyes:
It would not do to lift their hopes
When frost can still surprise.

If it is spring, the Queen will smile
And shake dirt from her hair,
And leave her earthen bed a while
And rise to take the air.

But like the crocuses and squills,
She keeps one toe in Hell,
Where they still spell the daffodils
The same as asphodel.