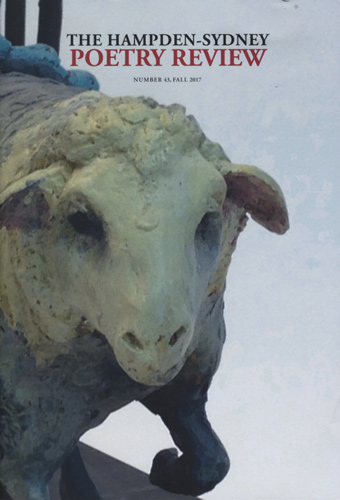 In this issue of the Poetry Review we have returned from our one-issue journey as a sonnet-only publication to a more 'normal' arrangement.  What that means, of course, is a strange mix of poems that, despite the lack of a coherent editing project behind the issue, coalesce into a form discernible for its coherence and its variety.  We still have sonnets, and other poems in form, but there are also translations of early modern Spanish poetry, elegies, musings on art galleries, reimaginings of Shakespeare and Herrick and many others.  We're grateful too to Treacy Ziegler for lending us her marevlous sculputre for the cover.  We hope you'll enjoy what this sheep is pulling your way.

Rail Splitter by A. Lincoln

I was killed by an actor, a famous, glamorous
young man, known for playing the tragic roles.
And I was a president, whose face was coarse

and enigmatic, though marked by a conscious mole.
But the derringer he stuck behind my ear
produced, in the end, a dark, symbolic hole,

American and bottomless. No tears
can fill it. Your Melville had the accurate verse:
What like a bullet can undeceive? Hear, hear—

the antique eloquence of the national curse?
What an ironic martyr I’ve been. I’m long
in a realm that has no ceilings, though dying was worse.

There is a mystery to being wrong
and that has darkened the shadows of my mind,
mainly, I mean, how I could like the song,

A-way down yonder in the land of cotton—for rhyme
and—what else should I call it but—jauntiness,
and ignore the euphemistic “old times.”

Make up a song to cover sin, boundless
and almost unimaginable sin. My task
has been to stare it in the face, faceless,

though it is. We share a common dark. A masque
is what we have—one voice and total silence,
and verse intended not to answer, but ask

the obvious question hanging in the distance
of Time. Who is that swinging on the gallows,
my friends united by love and innocence?

And who is buried in those endless rows,
those silent lines of American poetry
where metaphors and muses refuse to go?

Preface to an Unwritten Book by James Longenbach

Probably you never noticed the portrait
Hanging beside the stairs:
A young woman, though now she’d be about my age.
I had it painted when she died.
Somehow in the fifty years since then

This house has grown up around her,
The few books written,
The many I’ve read.
But in summer, in early evening,
There’s really nothing I’d rather do

Than sit here on the stairs.
We work in the dark,
As Henry James once said,
We do what we can, we give what we have.
As for the book I’m supposed to be writing now—

If you think I should do it, Jim, I will.
But you should realize I’d much rather spend my time
Reading or, since it’s the end
Of summer, sitting.
Our truest impulses are so immature

That most of us can’t recognize them,
Much less have the fortitude
To carry them out.
I’ve needed to remain
Mysterious, even to me.

Along the poem’s right margin I find marks:
Revenant of an English Renaissance
Specialist I once knew. Ballpoint runnel,
Cursive crag of q, oblique T-square t’s,
And curbside to quatrains the commentary:
Wilt thou meet arms with man, “from questioning,”
For sure thy way is best, “to acceptance
Of the human condition, unity
Of the cosmos.” Make one place ev’ry where.
Notes to measure the poet’s tempering
By God as second to secular test.
Yet, sieved through the holes of pocked abstraction,
The poem’s self in feeling gathers withal
In the pure gesture of the teacher’s scrawl.