The Department of Classics offers courses in the languages, history, and culture of classical antiquity, and in linguistics. The language courses emphasize the intellectual and cultural values of the study of Greek and Latin, in addition to first-hand appreciation of both classical and Christian literature, which are the roots of our cultural tradition.

Majoring in classics (Classical Studies, Greek, Latin, or Greek and Latin) does not commit you to a career in classical scholarship and teaching. Among our Classics graduates you will find college presidents, doctors and lawyers, businessmen, executives of major corporations and financial institutions, ministers, administrators of historical collections, museum curators, and artists. The Council on Legal Education of the American Bar Association rates classics as one of the five undergraduate majors most valuable for pre-law education.

Basic courses in ancient languages are carefully designed both for potential majors and for the general liberal arts student who wishes to use Latin or Greek to fulfill his language proficiency requirement or as part of his humanities distribution requirement (as explained in the Core Curriculum section later in this book). The beginners' textbooks in both Latin and Greek are based on material from ancient authors so as to move the student as rapidly as possible into original texts. In addition to learning the languages, you will acquire all the long-term benefits of training in Greek and Latin-richer English vocabulary, better command of English diction and grammar, and a more sensitive appreciation of literary style.

A special Classical Studies major, involving minimal study in the original languages, is available. Split or double-majors with Classics as a component can be devised for qualified students. "Special topics" tutorials or seminars are always available so that the student with particular interests can pursue individual study under the guidance of one of our professors.

The College holds memberships in both the American School of Classical Studies at Athens and the Intercollegiate Center for Classical Studies in Rome, enabling you to study in the summer or a semester in Greece or Italy.

When you're studying Greek, you get used to not having the answers and not feeling totally comfortable with the material. I came to like this feeling, and it helped me carve out my own space in the marketplace and invent myself as an entrepreneur.

The voices of great intellects , Jefferson, Thoreau, Johnson, and Tocquville on "Why Classics?"

Objects of cultural significance often come to colleges, where they are deposited by their owners in the expectation that they will enrich learning. Many times these gifts are relatively informal and little is known about them before they come to the institution. Such is the case with the Hampden-Sydney amphora, a gift in 1962 of Dr. J. William Hinton of New York City. 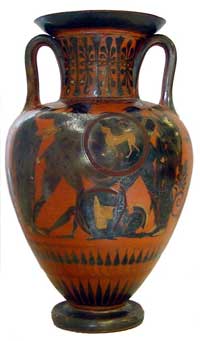 Not an alumnus, but awarded an honorary Doctorate of Letters in 1961, Dr. Hinton was impressed by the place ancient cultures held in the Hampden-Sydney curriculum. His gift to the then-newly-opened Eggleston Library also included a small collection of ancient coins, as well as a fragmentary marble head of a child. For whatever reason, the amphora, usually kept in the Rare Book Room of the library, attracted little attention over the years. And, as is often the case with gifts of this sort, there is no file on the object as one would find in a museum.

Researching the Amphora, 2000
In conjunction with the Trojan War symposium in 2000, Mary Prevo, Instructor in Fine Arts, undertook research on the amphora so that it might be used more productively as a teaching tool. Hampden-Sydney colleagues James Arieti, Pam Fox, Sharon Goad, Richard McClintock, and Lorie Mastemaker, all helped her in the preparation and presentation of this research, in a display in the Atkinson Museum. Also lending invaluable expertise were Sharon Koehler, conservator in private practice, and Dr. Margaret Ellen Mayo, Curator of Ancient Art, Virginia Museum of Fine Arts.

Eta Sigma Phi, the national honorary classical society, was founded at the University of Chicago in 1924, and Beta Theta chapter was established at H-SC in 1942. Eligibility includes demonstration of high proficiency in the study of the classics, completion of at least three semesters of Latin or Greek with an appropriate scholastic average. Advisor: Dr. Janice Siegel

The Benefits of Classical Studies

The History Net on Why Study the Classics?
-ThoughtCo.