"One of my best memories of Hampden-Sydney is getting there as a freshman for football practices-before the rest of the freshmen-and moving into First Passage with a few other football players. It gave me a chance to explore the campus and to really bond with those guys." 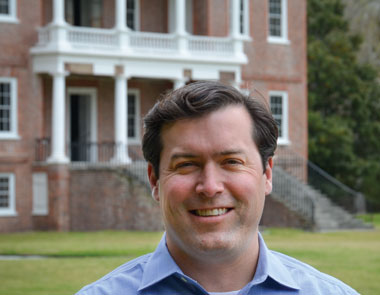 “All the time, I am getting e-mails intended for him and he is getting my phone calls. We have many of the same colleagues, so we are often getting confused,” says Carter Hudgins, the younger.

Hudgins grew up spending family vacations visiting historic sites up and down the East Coast. He says, "I literally grew up in the dirt pile."

In some ways it was inevitable that Hudgins’ career would turn toward historic preservation, but it was not until a history class at Hampden-Sydney that he fully embraced the possibility of a career in archaeology. He had spent the summer working at an archaeological field school at Jamestown and used the knowledge he had gained first-hand as the basis for a presentation in his class on Colonial America. His professor disapproved of Hudgins’ lack of secondary sources and Hudgins was thereafter committed to the value that historic artifacts have in our understanding of history.

Hudgins does not fit the bookish, reserved historian stereotype. At Hampden-Sydney, he played football for two years, joined SAE fraternity, and was the CAC chairman his senior year. He jokes that he was too busy planning parties to volunteer at Hampden-Sydney’s Atkinson Museum.

“One of my best memories of Hampden-Sydney is getting there as a freshman for football practices—before the rest of the freshmen—and moving into First Passage with a few other football players. It gave me a chance to explore the campus and to really bond with those guys. We all ended up pledging the same fraternity and are still very close.”

After graduation he continued working at Historic Jamestown for a year and a half before enrolling in the University of London to pursue a master’s degree and Ph.D. “What better way to study colonial Americans, who were British subjects after all, than go to the ‘Old World’—to London—to study history and material culture?”

In 2006, he then moved to Charleston, South Carolina, his wife’s hometown, and began working at Drayton Hall, where his many duties include managing all of the archaeology, the collections-based work (conservation and exhibitions), stewardship of the landscape, and the education programs, plus finances and communications.

“Drayton Hall is the finest example of Colonial architecture to survive to the present in an intact condition. It is also significant because it is the first example of Palladian architecture in what would become the United States. A lot of people think Thomas Jefferson was the promoter of Palladian architecture in the United States, but it really starts a generation earlier at Drayton Hall. The other significant fact about Drayton Hall is that the house has never been updated. There are no modern utilities: no running water, no electricity.”

The house has been preserved as it was when it was acquired in the 1970s. This differs from approaches at some other historic homes, such as Montpelier, which was returned to how it appeared when James Madison lived there. The paint on the walls survives from the 1880s. The hand-carved plaster ceilings are from the 1740s.

The history of Drayton Hall extends beyond the existing house, which was constructed in 1738, and grounds. Beneath the house, archaeologists have found evidence of a Colonial residence from the 1680s. Beneath that is evidence of a Native American village.

As a trained archaeologist, Hudgins naturally believes that finding and examining artifacts is vitally important to understanding our history. He says, “Many people believe that history is just written records, the documents. However, like reading the newspaper today, everybody has a bias; there are things that are not recorded. There are significant gaps in the written record. By doing historical preservation, by doing archaeology, we have the chance to fill in those gaps.”

As his duties at Drayton Hall have increased, Hudgins is spending less and less time doing archaeology, but he is excited about what he has planned for the historic site.

He would like to see a museum constructed to house the extensive furniture collection that cannot be kept in the main house because it lacks climate controls.

Hudgins also wants more people to know about Drayton Hall. “This is one of the nation’s premier historic sties, but it is not as well known as Mount Vernon or Monticello, so we really need to increase the awareness of Drayton Hall.”

As he works to achieve these goals, he does not have to look very far to find a suitable mentor. His father, a leader in the field of historic preservation, is only a short drive away.

“To go to conferences and not only be in the same audience together but even on the same panel together, to publish in the same books together—what other father and son get to share that? It is enormously rewarding.”

Hudgins also appreciates having both his parents and his wife’s parents nearby. “There are zero complaints having everyone in the same ZIP Code, literally. My wife and I have twin daughters. My parents really help share in the responsibility of looking after them. All four grandparents are right here. I don’t want to sound cheesy, but family is a significant part of one’s past and one’s present and to be able to have your family in the same locale is incredibly significant.”

Hudgins says historic preservation is about understanding where we came from and who we are. As he digs deeper into understanding and sharing the influence of the Drayton family in the South, he equally strengthens the foundation that his own family is having on the field he and his father hold so dear.

Update: Hudgins is now President and CEO of Drayton Hall