Today, oyster farmers such as Chris Buck '97 are the driving force behind resurrecting a long-lost Virginia staple and revitalizing the once-neglected Chesapeake Bay waters in which they flourish.

"Well, I love what I do," said Chris Buck '97 as he pried open a just-plucked oyster with a twist of his knife. Out on the water, standing on his pontoon barge with piles of oysters all around him, the Hampden-Sydney alumnus took a few moments to savor the fruits of his labor and offer some tips on how to enjoy a true Virginia delicacy in its purest form.

"Sometimes I'll just bring a little cooler of ice out here in the morning, throw a half-dozen in there first thing, and have a snack ready in a couple hours," he said. "They're a lot like beer-the colder, the better." 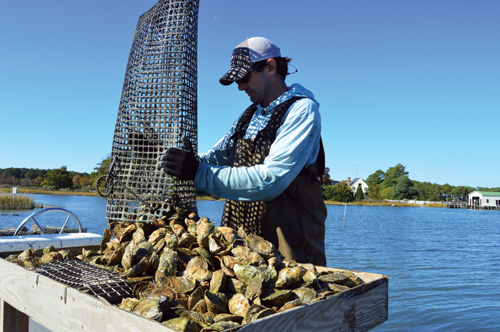 After popping open the oyster and cutting the adductor muscle from the shell wall, the taster should give it a brief sniff and then sip the salty brine to "prepare the palate," Buck explained. "After that, it's bottoms up." Some connoisseurs have set the proper number of chews at nine, although more often it's said tongue-in-cheek. If the unaccustomed are a bit hesitant to try them this fresh, there are volumes written on how to prepare them in a variety of ways.

Grilled, fried, steamed, raw-however one may prefer the salty morsel, the key to quality lies not so much in the preparation, Buck said, but rather in the methods and location of oyster farming. And that's where Buck has waded in, plying his trade with his wife and two children on the south end of the Eastern Shore, where his hard work and the natural conditions produce about 2,500 to 5,000 adult oysters per week.

Ruby Salts Oyster Company is named after his daughter Ruby, who was born into the family about the same time as the first harvest. Since the age of about 18 months, the five-year-old has had a seemingly insatiable appetite for "eating up all of the profits," Buck joked. As a true native, she prefers them fresh and straight up.

In his largely one-man operation, Buck grows, washes, sorts, maintains, and raises his own oysters, personally transporting his yield directly to high-end restaurants in Richmond and elsewhere within hours of harvest.

It may seem like a novel enterprise, but Virginians have long sought out the hard-shelled mollusk, whose appeal has ironically threatened its very existence. It may seem counter-intuitive at first glance, but Buck's oyster farm is one of the keys to returning the Virginia oyster to its former glory, reminiscent of the days when the nearby Algonquin Indian tribes knew the Chesapeake as "the great shellfish bay."

Often called the eastern oyster, the Virginia oyster crassostrea virginica is a native to these waters. It is a filter feeder, drawing in surrounding water, filtering out plankton and detritus, and spewing out clean water at a rate of 50 gallons per day. It reproduces during the warmer months and can thrive in a wide range of temperatures and salinity. The Bay was once so inundated with these cleaners that the water was clear down to 20 feet or more.

Indians had been eating oysters for generations, and the Jamestown settlers first harvested them more than 400 years ago. Back then, "the oyster reefs were so high and thick that explorers had to break them up in some places just to navigate the waterways," Buck said. Explorer John Smith reported that oysters lay "as thick as stones." Swiss nobleman Francis Louis Michel wrote in 1701, "There are whole banks of them, so that the ships must avoid them." 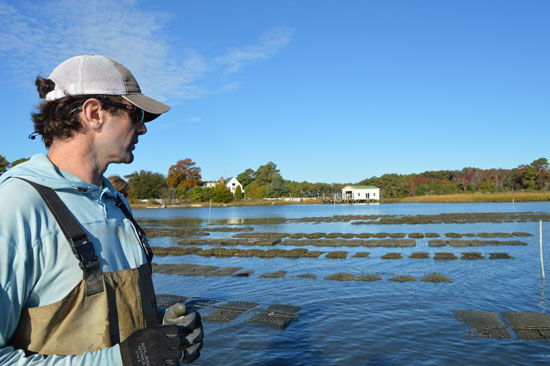 New layers of oyster shell reefs had been built on the backs of thousands of previous generations. But dredging-which removed the necessary foundation for new oysters-along with overharvesting in the late 19th century and parasitic diseases in the mid-20th century, virtually annihilated the oyster population by the 1960s. Today it is estimated that only 1% of the Bay's oyster population remains.

Today, oyster farmers such as Buck are helping to give the Virginia staple a second chance. Wild oysters are still harvested, so farming oysters provides some relief to the beleaguered species-especially since in 2014 the Virginia oyster industry "saw a 33 percent increase in revenue" reflecting "demand for oysters so high this winter that Virginia growers couldn't keep up," according to the Daily Press. More oysters also help clean the water and create jobs. It's a rapidly growing industry that is renewing the Bay's health and economic vitality while also providing eager restaurateurs with a delectable treat.

And it all starts with a man, his boat, and a particular spot on the water.

"Being where we are, on the Eastern Shore, and as far down the Chesapeake Bay as we are, away from all of the population, we get a good jump on water quality. We get just the right mixture of seawater. The ocean is about 33 parts per thousand salinity, and up the Rappahannock, they're anywhere from 11 to 15. Where we are, we tend to stay around 23 or 25 parts per thousand. A lot of it is preference, but here you get a good, salty oyster."

Buck sublets about an acre of bottom from clam farmers just a few hundred yards from his side of the shore. He buys 10,000-count bags of "seed" oysters from hatcheries that sell the pods for about 2 cents apiece. He puts those in mesh bags, which are then laid on rebar racks set at particular depths near the shoreline. With the rise and fall of the tide, the oysters are variously submerged and exposed to the sun and air.

"That forces the oyster to shut down," he said, "to stop eating, to stop growing for a couple hours, to flex that muscle. It's exercise. It hardens the shell. That'll usually be for about two hours per day while the tide is out." From there, it's largely a matter of sorting the shells according to size, keeping them clean, and tumbling the bags.

It can take an oyster about 18 months to grow to harvest size. As they grow, they need to be transferred into mesh bags with larger holes. This allows more water to flow around them, providing fresh nutrients while still keeping them conveniently contained. But the mesh gets clogged with algae, and competitors for food such as barnacles and sponges choke out the nutrients. So Buck takes a fabricated water pump-"my secret weapon," he calls it-to spray the debris off the bags on a daily basis. It has saved him hours of work and effectively keeps the oysters clean and free with a constant flow of water through the mesh.

Buck's constant attention also helps the oysters grow and form properly. If left unattended, the shells will often grow too erratically, or too thinly, or even fuse together. They may settle and grow into the mesh holes. So every couple of days he rides out to the racks to tumble the bags.

"They naturally want to grow long and thin," he said, "and so you have to just pick up the bags and roll them back and forth. That knocks them apart, and every time you do that you're chipping the bill off the edge. That's where they grow. So as you tumble them, it encourages them to grow out and down. You get an oyster with a nice cup to it, which they like to see in the restaurants. You get a plump piece of meat in its own juices, looking good on the plate.

"But that's my way," he said. "Some guys take a different approach, keeping the oysters submerged to increase volume. They put them in grow-out cages in deeper water. They can stack thousands of oysters on top of each other in a small space. It works and they grow, but then the bottom ones never see the light of day. But it works for them.

"They're selling to wholesalers. We're selling to the high-end market. We put our name on our oysters, and we stand behind them."

Buck currently sells his oysters in Richmond to two of The Boathouse restaurants, the Metzger Bar and Butchery, the Pearl Raw Bar, and the Burger Bach restaurants. He also takes his loads to the Yellow Umbrella and St. Stephen's farmers markets in Richmond, where he meets new customers and makes business connections.

If one ventures out to the Eastern Shore, Ruby Salts oysters also can be found at The Oyster Farm Seafood Eatery in Cape Charles.

Buck said there is a common misconception that oysters are safe to eat only in months that contain the letter "R;" that is, essentially, September through April. Although this may have been true decades ago, much has changed in the way oysters are grown, handled, and transported.

"Heat is the worst thing for an oyster," Buck said. "In the old days, before rapid and mechanically refrigerated transportation, harvested oysters would go into a railroad car or sit up on barges for hours in the sunlight. Then along came trucks and high-speed trains with refrigeration, so now we can get the oysters out of the water and to the customer much faster.

"You also had a problem with the seasons. A wild oyster is a diploid, meaning it's fertile and will reproduce. In the summer months the oyster is trying to spawn, and they care more about reproduction than about eating and staying plump and maintaining meat quality. So the meat will get thin and scraggly.

"The ones we harvest here are triploids, like a mule, bred to just eat and grow and be disease-resistant. They're perfectly good to eat year-round. We keep them shaded during the summer months or on ice or in a refrigerator. There's no opportunity for bacteria to multiply."

These careful and deliberate farming practices are setting the Virginia oyster on a path to prosperity.

Increasing demand and local movements to revitalize the Bay point to a promising future. Part of the Chesapeake Bay Foundation's mission is to promote the use of the natural filters to help keep the water clean through oyster restoration projects; the Eastern Shore Tourism Commission and the Artisans Center of Virginia are working together to highlight the local delicacies through tourism promotion; and the Virginia Tourism Corporation, among many other groups and businesses, is spreading the word on this local treasure.

The Virginia Oyster Trail team, consisting of local representatives in the Chesapeake region, has identified at least seven areas with oysters of particular flavors. In the lower bay Eastern Shore region, where Buck farms, his oysters are described as having "mild saltiness that melts into a distinct sweet and buttery finish." Indeed, the oysters Buck provided for a Hampden-Sydney taste testing were universally applauded, even by the more seasoned epicures.

Even though Buck is just trying to make a living, he and others are the driving force behind resurrecting a long-lost Virginia staple and revitalizing the once-neglected waters in which they flourish. It may be a long road ahead, but fortuntately for Virginia and her visitors, it'll be a path paved with bushels of delicious, salty oysters.