Hampden-Sydney’s nationally renowned alumni network was certainly at work recently as a group of alumni visited campus to engage with students on an important topic: careers. 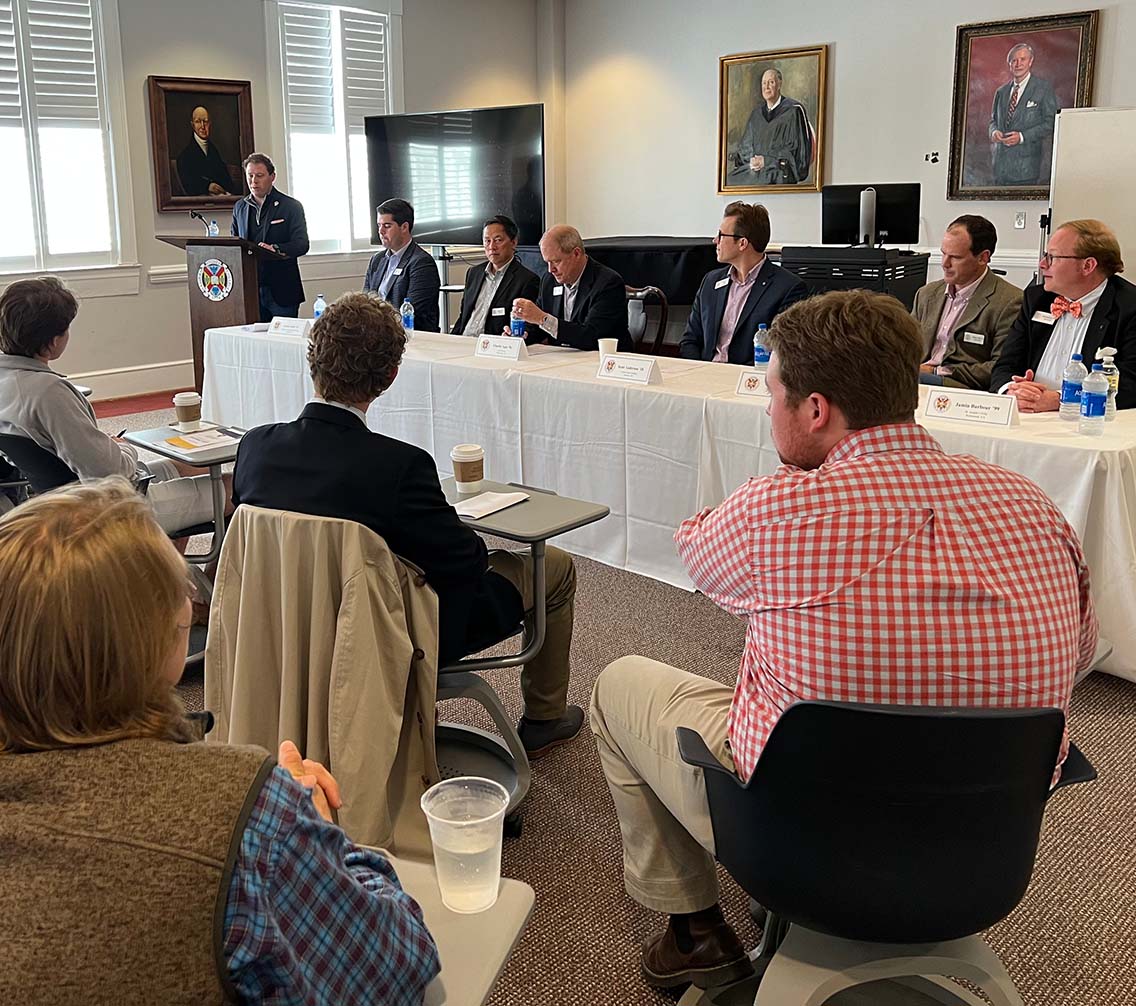 Sponsored by the Office of Alumni and Parent Engagement and the Ferguson Career Center, the Alumni Panel and Networking Reception on March 31 served as a prime opportunity for current students to pick the brains of alumni from a variety of industries and backgrounds.

In addition to an evening panel and Q&A session with students, the alumni spent time throughout the day in the Career Center, reviewing resumes and offering one-on-one advice to students about pursuing job opportunities, networking, and making the most of their time at Hampden-Sydney. The campus community is grateful to these alumni for sharing their time, wisdom, and experiences with the next generation of Hampden-Sydney men. Learn more about each of these dedicated alumni below:

Charles E. Agee, III '84 (Charlie) retired in July 2017 as director of corporate citizenship for Altria Group, after having served in leadership roles at both Altria and Philip Morris USA for over 32 years. In his most recent position, he was responsible for directing corporate philanthropy, community relations, and employee community involvement programs for the Altria Group family of companies. Charlie earned a Bachelor of Arts degree in Managerial Economics from Hampden-Sydney and a Master of Arts in Education and Human Development from The George Washington University in Washington, D.C. He also holds a Certificate in Corporate Community Involvement Management from the Carroll School of Management at Boston College. Charlie currently serves on the Board of Directors of the Community Foundation for a greater Richmond, BridgePark Foundation, Chamber RVA Foundation, the St. Mary’s Hospital Community Advisory Committee, and the Alumni Board of Directors at Hampden-Sydney. Charlie’s past nonprofit and community leadership roles include The Capital Region Collaborative, The Conference Board’s Contributions Council, ART 180, Lead Virginia, Leadership Metro Richmond, Meals on Wheels of Greater Richmond, and the Virginia Home for Boys and Girls.

Scott Anderson ’10 resides in Durham, NC, with his wife Caroline, who is the morning anchor for Spectrum News 1 North Carolina, and son Prescott, who was born in May. Scott is the Director of Product Management and Marketing for Luxfer Gas Cylinders and serves on the senior leadership team that oversees Luxfer's Riverside, CA, Pomona, CA and Calgary, AB, Canada facilities. While on the Hill, Scott played football and helped the '09 team to an undefeated record, volunteered as a Young Life leader, served as chair of the Student Senate, was a firefighter with HSVFD and served as student body Secretary-Treasurer. Scott currently serves as president of the Hampden-Sydney Alumni Board of Directors.

Aaron Arant ’13 is a part-owner of Northeast Tool & Manufacturing, a leading Aerospace & Defense manufacturer. In his role as chief operating officer, Aaron focuses on generating new lines of revenue and providing strategic direction to the company. Prior to Northeast Tool, Aaron worked in the petroleum industry and received his MBA from Southern Methodist University in Dallas.

Aaron currently resides in Charlotte with his wife Marion and son Mac (2). Outside of work, Aaron enjoys spending time at the coast with family, traveling to his wife’s hometown of New Orleans for festivals and crawfish season, and working on honing in his golf game. 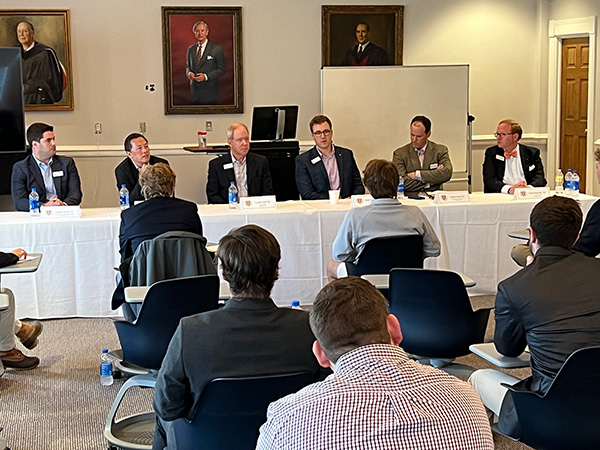 Benjamin Barbour ’99 is a nonprofit executive in Richmond with over twenty years of volunteer and professional experience in fundraising, leadership, and organizational management. Currently, Mr. Barbour is manager of data & research in the advancement office of St. Joseph’s Villa, the oldest continuously-operating children’s nonprofit in the United States. He is an alumnus of the Community Foundation serving Richmond & Central Virginia’s Emerging Nonprofit Leaders program, is credentialed in nonprofit management, and a member and former vice president of the Richmond Chapter, Association of Fundraising Professionals.

While at Hampden-Sydney, Mr. Barbour was an Allan Scholar, Tour Guide, president of the Student Museum Board, member of the College Republicans, member of the Student Development Committee, and head lifeguard.  Additionally, he was elected to the Phi Alpha Theta (History) and Pi Sigma Alpha (Political Science) honor fraternities, participated in the Virginia Program at Oxford (1998), and received the Cecil R. Bowman Museum Award (1999).

Mr. Barbour has been an active annual fund and alumni club volunteer for over twenty years, serving as class agent multiple years and Reunion chair (2014), sits on the Richmond Club leadership team, the Alumni Board, and the Board of the Esther Thomas Atkinson Museum of Hampden-Sydney College.  Additionally, he has been a member of the 1776 Society and the Society of Founders since 1998 and received the Gammon Medallion, recognizing distinguished young alumni service & philanthropy, in 2008.

Steve Ho ’95  is the founder and president of Welsh Advisors, Inc., a national provider of special tax credits and incentives. While Steve is familiar with a multitude of tax credits, he is an expert with the research & development tax credit and its application to businesses in various industries. Steve also has extensive experience with the employee retention credit. Over his 23-year career, Steve’s hands-on approach has led to well over $800 million in tax credits and refunds for his clients. Additionally, Steve has in-depth experience with the IRS and state audits, appeals and settlement processes, with an audit acceptance rate of 98.5%.

Before launching Welsh Advisors, Steve was the founder and practice leader for Tax Credit Co.’s research credit group. Responsible for all aspect of the business, Steve grew the business from nothing to well over $5M/year before the firm was acquired by an investment fund.

Prior to Steve’s work at Tax Credit Co., he was a practice leader at KPMG, where he managed a large team performing R&D tax credit studies for Fortune 500 companies throughout the US and Canada.

Steve earned a JD from the USC Gould School of Law, and a Bachelor of Arts from Hampden-Sydney College, where he graduated at the top of his class.

When Steve is free, he enjoys spending time with his wife and kids, reading and watching sports. He also likes to stay active by stand-up paddle boarding and bike riding. Over the years, Steve has been enthusiastically involved with coaching his kids’ competitive robotics teams, leading them to multiple state and worldwide final competitions.

Andrew Reed ’04, a native of Bastrop, LA, graduated from Hampden-Sydney in 2004 as a double-major in economics and history. While on campus, he played 2 years on the football team, was a member of Sigma Alpha Epsilon fraternity and Society of ’91 leadership program, served as a Resident Advisor, and was elected to the Student Senate his senior year.

Following graduation, Mr. Reed moved to Columbia, SC, to pursue a business opportunity with a fellow H-SC classmate. Since that time, he has been involved with the start-up of multiple businesses in a variety of different fields. Today, Mr. Reed is co-owner and chief operating officer of WalReed Development, a multi-unit franchising company that focuses on investing in and developing emerging brands in the franchising space.  Past highlights include the development of 23 Marco’s Pizza locations throughout the Southeast.  The company is currently in the process of building and operating 31 Scooter’s Coffee locations in the Carolinas. Mr. Reed has multiple interests in the real estate sector, via his companies Reed Renovation & Design (alongside wife Sara), as well as Cane Creek Land & Timber (real estate investment vehicle focusing on the acquisition of Timber, Farm, & Recreational properties in the Southeast).

Andrew and his wife Sara currently reside in Columbia, SC, with their five children, where they are active members of Shandon United Methodist Church. He is deeply involved in the community as board member of various for-profit and non-profit organizations. While not working or spending time with his family, Andrew enjoys hunting, fishing, and working on his timber farms to enhance wildlife habitat.