The Hampden-Sydney College community gathered in Fleet Gymnasium at Kirby Field House on May 14, 2022, to celebrate the accomplishments of the 208 members of the Class of 2022 and to welcome these extraordinary young men into the Hampden-Sydney alumni network. 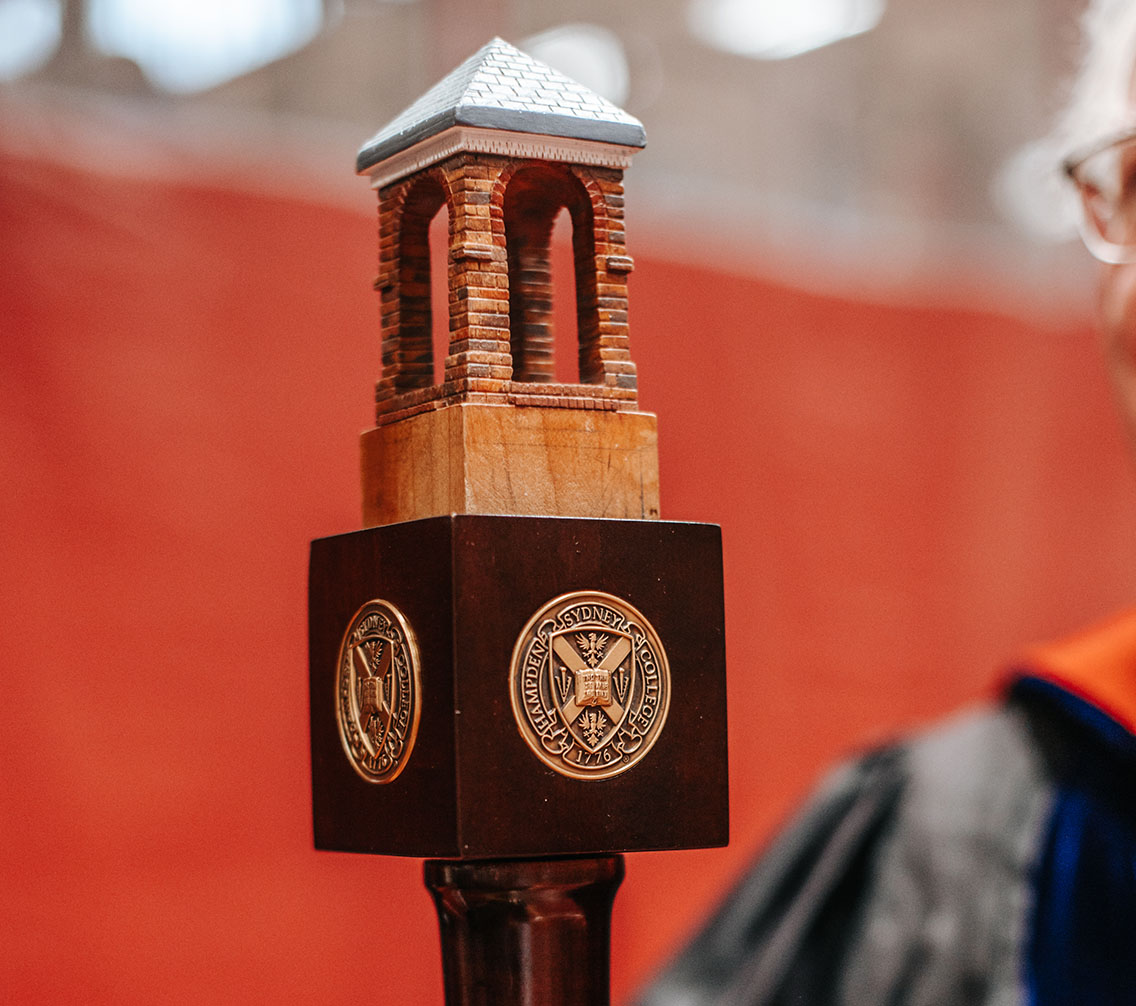 In addition to President Larry Stimpert, who greeted the assembled guests and delivered a charge to the new alumni, the ceremony’s speakers included first honor graduate James Edward Garrison ’22, who delivered the valedictory address, and The Honorable Ben Sasse, who represents Nebraska in the United States Senate.

In his remarks, President Stimpert saluted the graduating seniors for their efforts to help lead the student body and younger students through the disruptions of the pandemic: “You have shown them how to be resilient, and how to thrive and achieve goals in the face of adversity. You have demonstrated a willingness to make personal sacrifices for the common good, and that here we are our brother’s keeper. We are grateful for the mark you are leaving on this College’s history and legacy.”

“Even as we have used the word ‘normal’ repeatedly during the pandemic,” Stimpert continued, “I would argue that what we seek to do at Hampden-Sydney is far from the norm. Given our mission, purpose, and legacy, we may be the most distinctive college in the country. Our mission to form good men and good citizens was surely one of the most important projects in higher education when Hampden-Sydney was founded in 1775, and it is an equally important project today.” 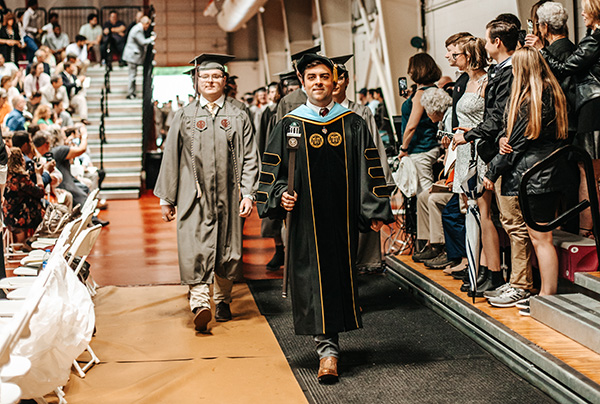 In remarks that touched on history, scripture, and the many complexities of today’s world, Senator Sasse gave the graduating seniors an assignment. “Set a plan for the month of June,” he said. “Figure out what habits you’re going to have when you no longer live in a community this structured. Are you going to read a book in the month of June? Are you going to learn to say ‘I was wrong’ at least once a day? Are you going to log your workouts? There are ways that leaving here and the euphoria of celebration can lead to drift. The way to beat that drift is to take the next two weeks and decide what kind of habits you want to instill for yourself for the experiment for the month of June, and then before May 31 comes, pick two of your buddies from this community and tell them your goals, so that now you have a built-in accountability partner for what you said you were going to accomplish. You will fail, but if you have an accountability partner, it’s easier to get back on the horse together.”

“Don’t let June 30 and July 1 be your failed moment to establish your new commenced adult habits as you head into the world,” Senator Sasse continued. “Because the rhythm of immediacy that comes from the super computer in your pocket requires you to recognize there are only about three things at the end of time: There is your identity about what you think happens in eternity, there are the habits about how you grind every day to live a life of gratitude trying to make a difference serving people, and there are the people with whom you do it.”

Recognize that there are only three things at the end of time: There is your identity about what you think happens in eternity, there are the habits about how you grind every day to live a life of gratitude trying to make a difference serving people, and there are the people with whom you do it. 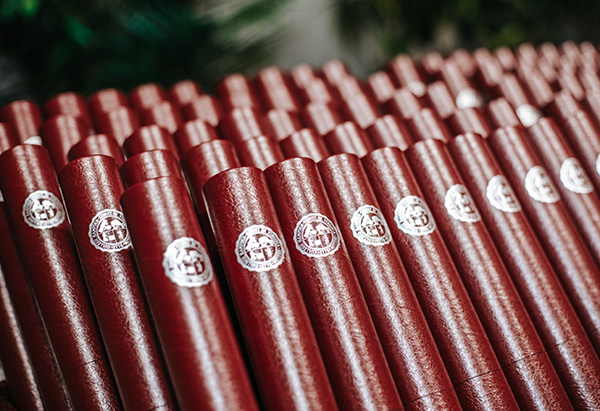 Honorary degrees were awarded to Senator Sasse and James K. Woodley III ’79, who served as the Baccalaureate speaker on Friday.

The Gammon Cup, given to the student-athlete in the graduating class who has best served the College, was awarded to Hunter Leigh Martin ’22. A Biology major with a minor in Chemistry, Hunter was an Allan Scholar and Boys State Scholar, Dean’s List Student, Wilson Leadership Fellow, Omicron Delta Kappa inductee, and member of Sigma Chi. In addition, Hunter finished his senior year as the ODAC Individual Golf Champion for the second consecutive year, establishing a new ODAC Championship record. He is the only second-ever repeat medalist, and the sixth Tiger to claim medalist honors as an ODAC Individual Champion in the sport.

The Anna Carrington Harrison Award, given to the student who shows the most constructive leadership in a school year, was awarded to Coleman Bradner Meadows ’22. A Psychology major with a minor in Leadership in the Public Interest, Coleman was a Harrison Scholar, Boys State Scholar, Dean’s List Student, Wilson Leadership Fellow, and inductee of both Omicron Delta Kappa and Phi Beta Kappa. In addition, Coleman’s numerous activities include the Garnet and Grey Society, Mentoring Club, Peer Advisor, Orientation Leader, Psychology Tutor, and Editor for the Journal of Sciences. A member of the Student Court for three years, Coleman served as Student Court Chairman during his senior year.

The Samuel S. Jones Phi Beta Kappa Award, which recognizes intellectual excellence as manifested in outstanding student research, was awarded to Michael Lawrence Van Citters ’22 for his project entitled “Eros and Eris: Love and Strife in Ancient Greece, A Collection of Greek Poetry in Translation” completed under the supervision of Dr. Rob Irons, Associate Professor of Classics.

The Algernon Sydney Sullivan Medallion, which honors students and friends of the College for character and service to Hampden-Sydney, was awarded to three members of the Class of 2022: 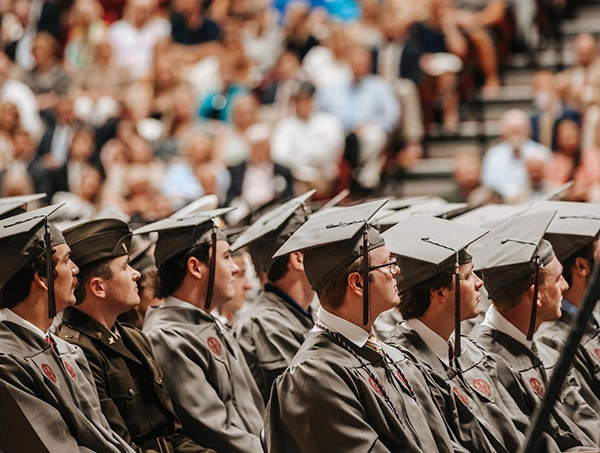 The second honoree was Arthur W. Leighton Holm ’22, an Applied Mathematics major, Patrick Henry Scholar, Dean’s List student, and Head Resident Advisor. An inductee into both Omicron Delta Kappa and Phi Beta Kappa, Holm completed the Society of 1791 leadership program and also served as a Student Court investigator. He received the Investigator of the Year Award as well as the Weyland Thomas Joyner Physics Award during the 2022 Final Convocation.

The third recipient was Joseph Patrick Kelly ’22, an English major, Harrison Scholar, Omicron Delta Kappa inductee, Dean’s List student, and resident advisor.  As an English major and a Music minor, he received two awards at this year’s Final Convocation: the Randolph Minter '88 Glee Club Award and the McClintock Award in the Visual Arts.

The Cabell Award, given annually to a faculty member in recognition of outstanding classroom contribution to the education of Christian young men, was awarded to Associate Professor of Government and Foreign Affairs Celia M. Carroll Jones.

The Thomas Edward Crawley Award, which is awarded to a professor "most distinguished for devoted service to the ideals of Hampden-Sydney and the education of her sons," was given to Bortz Library Director Shaunna E. Hunter.

Scott Pittman ’22, the 2021-22 student body president, presented the Senior Class Award to Dean of Students Richard M. Pantele ’13. The award is given to a member of the College’s faculty, administration, or staff who in the eyes of the class members has contributed during their four years most significantly to the College, its students, and the community. In his remarks, Pittman said of Pantele, “He is someone who embodies the values of a Hampden-Sydney man and makes this place better. He guided us through two of the hardest years in the history of the College. He has an undying love for this place, its people, and all for which they stand. And at the end of the day, his commitment to selfless service is a shining example to students and faculty alike.”

Congratulations to all award recipients and to the members of the Hampden-Sydney College Class of 2022!