More than 13 years after his retirement, Squires Professor Emeritus of History Ron Heinemann remained a fixture on the Hill. Proof of his lasting legacy can be found in these tributes authored by his former students and fellow faculty members following his passing on November 18, 2020.

This story recently appeared in the Spring 2021 Record.

Ron Heinemann has been one of the most important influences in my life since I first set foot in his classroom in Morton Hall. 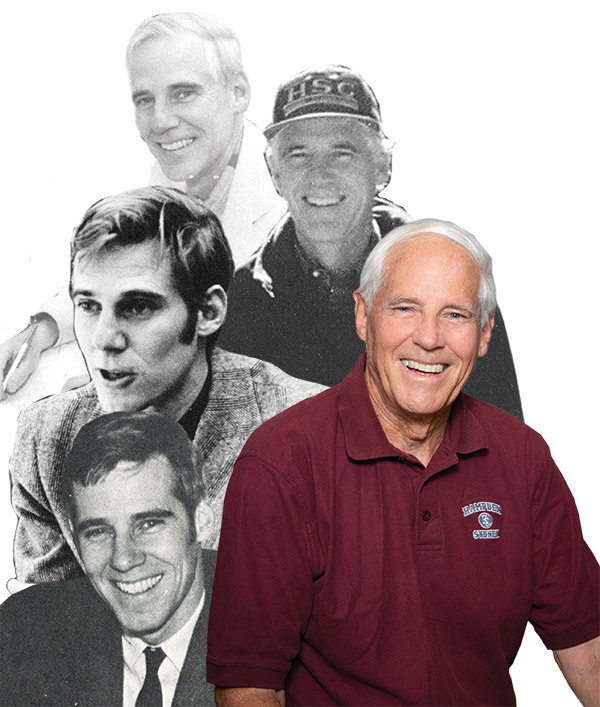 I have driven back to campus many times over the years to sit in that same classroom and attend more Heinemann history lectures, and memories of history classes gone by come right back. The set of his jaw. The look in his eye as he confidently paused before making his next point.

More than 50 years after pursuing my history major, I can pick up one of Ron’s books or one of the many notebooks I kept from those classes and see comments from those late ’60s history lectures come flying right off the page. In a polarized world, he possessed the nearly unheard-of capacity to enthrall students from across the entire political spectrum, not just liberals like me. He was the quintessential world-class professor, and he loved Hampden-Sydney right down to his core. My daughter Linnea once described her favorite professor at Georgetown. She finished by saying, “Dad, she’s my Heinemann.” I told Ron this story and finished by saying that it brought tears to my eyes. He said that it brought tears to his eyes also. There we sat, professor and former student, now old men, weeping over the joy of learning.

We mourn the loss of one of the best while we smile in deep appreciation for what he taught us and how he inspired us.

Ronald Heinemann was not a quiet or timid member of the Hampden-Sydney community—he made his presence felt around campus and beyond the campus as well. He was unquestionably a consequential member of the Hampden- Sydney family, and the depth of his commitment to making a difference was reflected in the energy, passion, and serious thought that he invested in his teaching, his scholarship, his community service, and life itself. His moral convictions defined him in every way that is important, and they were visible for everyone to see—Ron was not one to hide his convictions under a bushel.

Our conversations over a period of more than 40 years, some of them public and some private, were often spirited and always enlightening. We were both prominent and passionate participants in the faculty’s coeducation debate of the mid- 1990s—and we were not on the same side. But he never acted as if there was anything personal about our disagreement. Our last public debate, on the merits of the Electoral College, took place less than a month before his untimely death. His tough and informed criticism of the Electoral College, and his stamina at 81 left me feeling rather aged at 72. I apologized the next morning for the occasional aggressiveness of my defense of the Electoral College only to have him respond that debates should be spirited. His response, as always, was generous and good humored.

Dr. Heinemann was an integral part of a golden faculty that significantly impacted generations of young men and future leaders in our Commonwealth and beyond. In a school that fosters an environment of free thinking, Dr. Heinemann simultaneously pushed and demanded of his students an expression of thought beyond mere platitudes, to instead think critically and to be prepared to do so daily.

Dr. Heinemann never shied away from stating his opinions on the hot topics of the day and facilitated discussion of issues without demeaning those with whom he disagreed. He insisted that his students also cogently express their views without demeaning their peers. He epitomized the academic environment at H-SC where students are not told what to think or say but are encouraged to develop the ability and logic to speak self-assuredly so that their words carry the authority of the knowledgeable.

My time at H-SC and thereafter left me with the belief that Hampden-Sydney is both a part of my family and a home to me. Dr. and Ms. Heinemann played a central role in fostering these feelings. I’ve returned to this home many times over the years and invariably run into Dr. Heinemann. He would ask with genuine interest about my family, and I could always count on seeing him and his lovely wife, Sandra, at basketball and football games, cheering on the Tigers, win or lose. His warmth and congeniality, coupled with the spark of mirth in his eye, was an unspoken “welcome home” that I grew to deeply appreciate.

These experiences with Dr. Heinemann are a compelling contradiction to Thomas Wolfe’s assertion that “you can never go home again.” In fact, you can, and hopefully you will, whether you are greeted by old friends or merely memories of them and the good times gone by.

We are an accumulation and product of our life experiences—successes, failures, good and bad times and the experiences and lessons in and outside the classrooms of Dr. Heinemann and others at H-SC profoundly impacted the person that I was and have become. Thanks Dr. Heinemann!

Professor Heinemann’s service to the College transcended being just a teacher and scholar. A good liberal arts education is only one aspect of the H-SC experience, the formation “of good men and good citizens” being the other. Professor Heinemann was an outstanding role model for the College’s sons. A strong moral ethos informed his person, his teaching, and his scholarship, and he believed that the historian must do more than simply study history for its own sake. He believed that the historian functions as the moral conscience of society and must assess the past and make moral judgments to inform the students’ understanding of the present and reinforce the values brought with the student to the College. It is indicative of the presence of moral issues in his classroom that in his first semester at Hampden-Sydney, the students gave him the sobriquet “Righteous Ronnie,” not an appellation of derision, but one of sincere affection and respect.

Dr. Heinemann exemplified what is to be admired in a professor. To conduct oneself with dignity was the standard for both student and teacher. His students observed that taking pride in one’s work and hard work itself are admirable traits, being passionate about life and one’s profession are positive virtues, that one should have the courage of his convictions, and that caring for the downtrodden and rejecting discrimination is an obligation of all good men and good citizens. They understood that while he was preaching to them, instructing them, and criticizing them, he cared deeply about them and about their spiritual and moral well-being. Ultimately, it is who he was as a person that will be his most enduring gift to his students and this College.

He will be deeply missed.

To honor Dr. Heinemann’s memory and help future generations of good men and good citizens, we encourage you to consider a donation to the Ronald L. and Sandra W. Heinemann endowed scholarship at alumni.hsc.edu/gifts.