The fall semester marks the official opening of the Pannill Center for Rhetoric and Communication.

Facing Chalgrove Lake, the 11,500-square-foot facility includes the Rhetoric Studio, presentation practice rooms, and the College’s most technologically advanced classrooms, as well as designated spaces for the Center for Public History, Student Publications, and Undergraduate Research—allowing students to put their rhetoric skills into practice. At the center is Birdsong Atrium, an open, collaborative, and modern shared space. 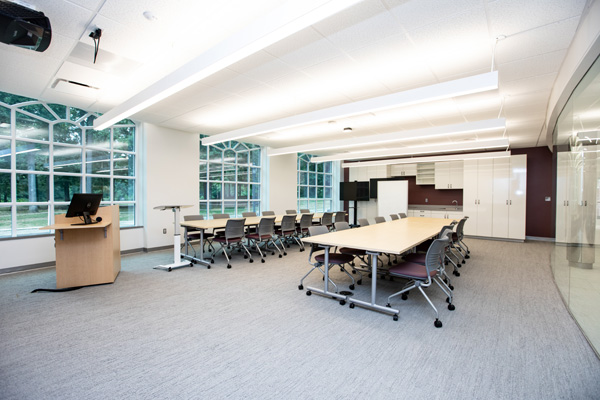 The new Rhetoric Studio brings together the Writing and Speaking Centers and adds a third component: digital rhetoric, a form of communication that is composed, created, and distributed through multimedia platforms. “We are excited to be enhancing our consulting services and offerings to meet the dynamic needs of today’s students and their audiences,” notes Interim Director of the Rhetoric Studio Claire Deal. “The Rhetoric Studio provides an interactive, collaborative, and high-energy environment in which to do so.”

Also housed in the Pannill Center is the College’s Center for Public History, which helps students communicate the voice of the past and bring historical knowledge to the public. Initially, the Center for Public History will focus on projects in three areas: digital history, the Hampden-Sydney Oral History Project, and archaeology/historic preservation.

Moving the Office of Undergraduate Research to the new space will make student research increasingly visible to visitors, prospective students, and current students. Hands-on research—which is often inaccessible to students at larger universities—allows H-SC students significant opportunities to work alongside professors on projects of personal interest while developing skills in critical thinking, data analysis, and communication. According to Director of Undergraduate Research Mike Wolyniak, “The Office of Undergraduate Research intends to showcase the wide diversity of inquiry-based work conducted by Hampden-Sydney students. Work of this kind is needed by all students to be competitive in a rapidly evolving job market.”

Studies consistently show that the soft skills employers most seek are the ability to write, speak, and communicate effectively.

The close proximity of these offices allows for enhanced methods of collaboration and practical application of studies across multiple modalities. For example, the Rhetoric Studio can help students prepare visual assets to present research at conferences or assist Public History students in creating online exhibits for their archaeological digs. 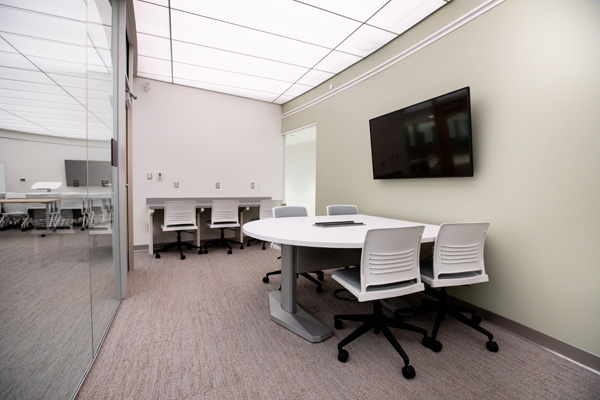 “We've always known that the Rhetoric Program has prepared our graduates no matter what field they pursue. Now we have the chance to expand our offerings and to provide students with new opportunities to put their communication skills into action,” says Elliott Professor of English Evan Davis.

These increased opportunities make students not only more successful in the classroom, but more prepared for the workplace, as well. “Studies consistently show that the soft skills employers most seek are the ability to write, speak, and communicate effectively,” says Davis, citing analytics that prove writing, communication, and critical thinking skills are in demand across nearly every occupation, even engineering and information technology.

An added bonus to the expansion of the space is the creation of a second-story terrace for Pannill Commons, allowing students, faculty, and staff to dine outdoors overlooking Chalgrove Lake.

The project was made possible by a $2 million gift from alumnus William L. Pannill '77, whose family’s generosity has impacted Hampden-Sydney students for many years. Pannill's father, William G. Pannill, was a major supporter of the construction of the College's dining facility, which was completed and named in his honor in 1991. More recently, Pannill’s generosity was instrumental in constructing the Brown Student Center, which was completed in 2017.

A public dedication of the Pannill Center for Rhetoric and Communication will take place Friday, October 11, at 3 p.m.

Dedication of the Pannill Center