With the dedication of the Pauley Science Center on Friday, November 11, Hampden-Sydney ushered in the future of the sciences at the College. 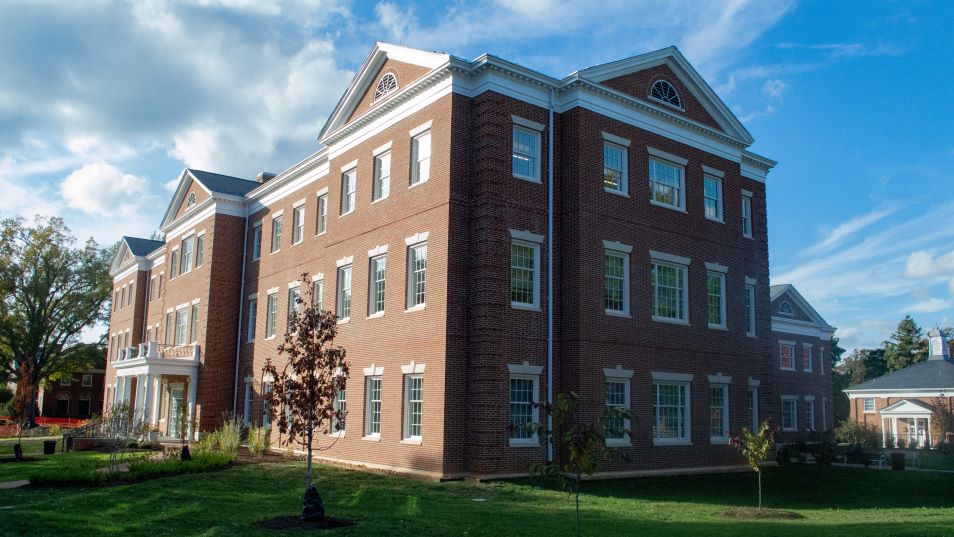 The Hill was abuzz with activity on November 11, 2022, as students, faculty, staff, trustees, and friends of the College gathered to celebrate the dedication of the Pauley Science Center, a state-of-the-art facility made possible by a transformative $30 million gift in 2019 from Stanley F. Pauley via the Pauley Family Foundation.

Gathering in the two-story atrium of the new building, which is situated at the corner of Via Sacra and College Road, guests were welcomed by M. Peebles Harrison ’89, chairman of the College’s board of trustees, whose brief remarks were followed by a reflection from College President Larry Stimpert. He pointed out that although the facility is new, Pauley is truly a continuation of the legacy of scientific study at Hampden-Sydney, which began when his earliest predecessor, founding president Samuel Stanhope Smith, made philosophical apparatus—or science equipment as we would say today—the College’s first purchase.

Expanding on this sentiment, Patterson Professor of Biology Alex Werth noted that “from its very founding, Hampden-Sydney recognized the centrality of scientific, quantitative, and technical knowledge in producing good men and good citizens…to produce a truly educated and informed electorate, people who, whatever their careers, can speak and vote and teach their children and communities how genes influence health and behavior, how our world and our economies depend on varied energy sources, and how…our survival depends on the production of vaccines to respond not just to today’s pandemics, but tomorrow’s.”

The evening’s keynote speaker was Scott Nickerson ’95, senior vice president of manufacturing for strategic partnerships and enterprise expansion for Moderna. Mr. Nickerson’s remarks offered an inside look at the arduous journey to create and manufacture Moderna’s revolutionary COVID-19 vaccine, a journey which he says he would not have been a part of had it not been for his exceptional experience at Hampden-Sydney.

Following the singing of the College Hymn by the Hampden-Sydney Chorus, members of the Pauley family joined the speakers for a ceremonial ribbon cutting to conclude the dedication ceremony. Mr. Pauley himself passed away in 2020.

The dedication of Pauley Science Center coincided with the celebration of the 247th anniversary of the founding of the College, grounding the anticipation of the future of academic excellence at Hampden-Sydney with reverence for the Hampden-Sydney’s storied past. Students, faculty, staff, and alumni had several opportunities to celebrate at events leading up to the ribbon cutting.

From its very founding, Hampden-Sydney recognized the centrality of scientific, quantitative, and technical knowledge in producing good men and good citizens.

Kicking off the festivities on Thursday, November 10, was a Founders Day lecture hosted by the Wilson Center for Leadership in the Public Interest. Director of the Wilson Center Ryan Pemberton ’00 opened the event with a call back to the first statement issued by Wilson Center namesake Lieutenant General Sam Wilson when he became the College’s 22nd president: “The single most important person on this campus is the student, followed closely by the faculty.” Dr. Pemberton thanked the faculty for investing in students day in and day out, the alumni for investing in the next generation of Tigers, and the Trustees for investing their time to steward the College through its next 247 years. But he encouraged the most important people in the room, the students, to remember that they are invested in so heavily not because they are special, though they are, but because they are expected to do great things for others with their talents and advantages.

This reminder to pay it forward coincided nicely with the keynote speaker for the evening, pioneering heart surgeon Ranny Chitwood ’68, who paid it forward when he saw an unmet need early in his career. Following his prestigious fellowship training at Duke University, Dr. Chitwood opened the East Carolina Heart Institute in eastern North Carolina, where the instance of heart disease and stroke was the 12th highest in the nation at the time. The first surgeon in North America to perform robotic mitral valve repair, Dr. Chitwood urged students to predict the future they want to see, work hard to create it, and then lead in a way which would make the College’s Founders proud.

Thank you to all of the faculty, staff, alumni, students, and friends who made these events a time of both reverent reflection and eager anticipation. And most of all, thank you to the late Stanley F. Pauley, whose extraordinary generosity launched the future of the sciences at Hampden-Sydney and whose enduring legacy will positively impact the lives of Hampden-Sydney students for generations to come.