The Honorable Paul S. Trible, Jr. ’68 recently addressed a crowd at Hampden-Sydney College, crediting his alma mater with modeling what a great college should look like and informing the framework with which he built up Christopher Newport University. 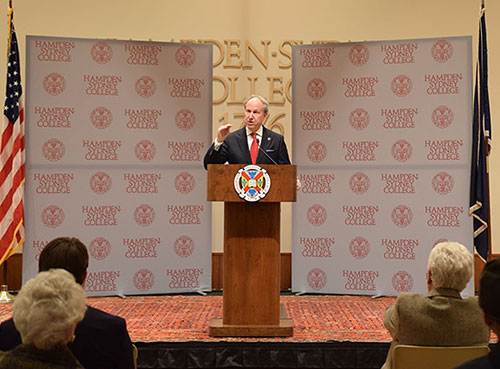 "Hampden-Sydney profoundly shaped my life. Any success, any significance I have achieved in my life can in large measure be seen as the result of the four years I spent on this campus. I love this place."

High praise from one of Hampden-Sydney’s most notable alumni. The Honorable Paul S. Trible, Jr. ’68 has truly led a life of significance, from his time as a United States senator to his current position as fifth president of Christopher Newport University— a public college that Trible elevated from near extinction to national rankings.

In his February 11 address to a crowd of students, faculty, and community members in Crawley Forum, Trible credited Hampden-Sydney with modeling what a great college should look like and informing the framework with which he built up CNU. "At Christopher Newport, we celebrate a speaking tradition and an honor code, customs that I learned here and took with me throughout my life."

The speaking tradition that Trible refers to is the simple act of acknowledging people with a smile and a greeting as they cross your path on the sidewalk, in the dining hall, or at the gym. Trible reminisced about a visit to one college where he noticed that students did not acknowledge one another as they passed. He stopped a student to inquire about the reason for this and the student replied, "That’s just the way the world is." Trible reminded the audience that Hampden-Sydney "isn’t interested in conforming to the world, but rather transforming the world."

Hampden-Sydney profoundly shaped my life. Any success, any significance I have achieved in my life can in large measure be seen as the result of the four years I spent on this campus. I love this place.

Diving deeper into the heart of his talk, titled Transformational Leadership, Trible said, "Respect for others is the essence of leadership. We must learn to engage each other, to learn from each other, to work with each other." And that, according to Trible, is why a speaking tradition is so important. 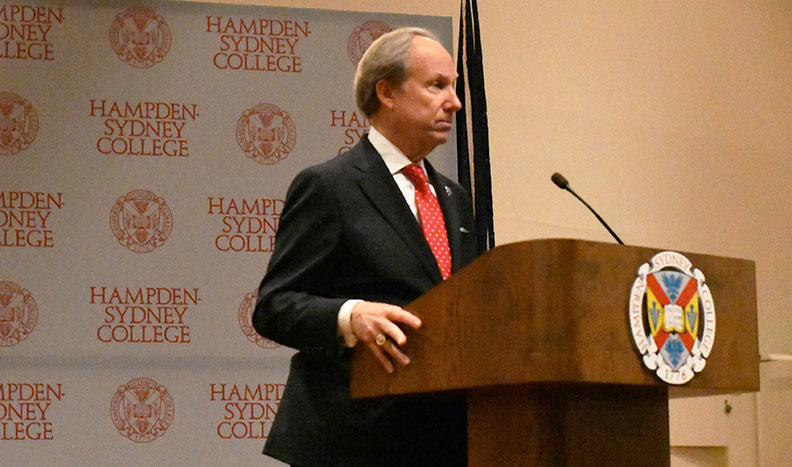 "Leadership involves the flowing back and forth of ideas. We must believe that everyone that crosses our path has something important to impart. If we’re willing to listen, we can learn from others and then great things are possible," Trible said. "Leadership and life demand great dreams. If you’re going somewhere, gentlemen, make it a great adventure. We are put on this earth to contribute, to live a life of significance. Those are the things I learned on the Hill."

The former senator recalled that when he first arrived at CNU and laid out an audacious plan to turn the floundering school into a prestigious university in short order, he was met with more than one doubtful countenance. "But great dreams have great power and consequence," Trible proclaimed. "Don’t waste your lives on modest dreams."