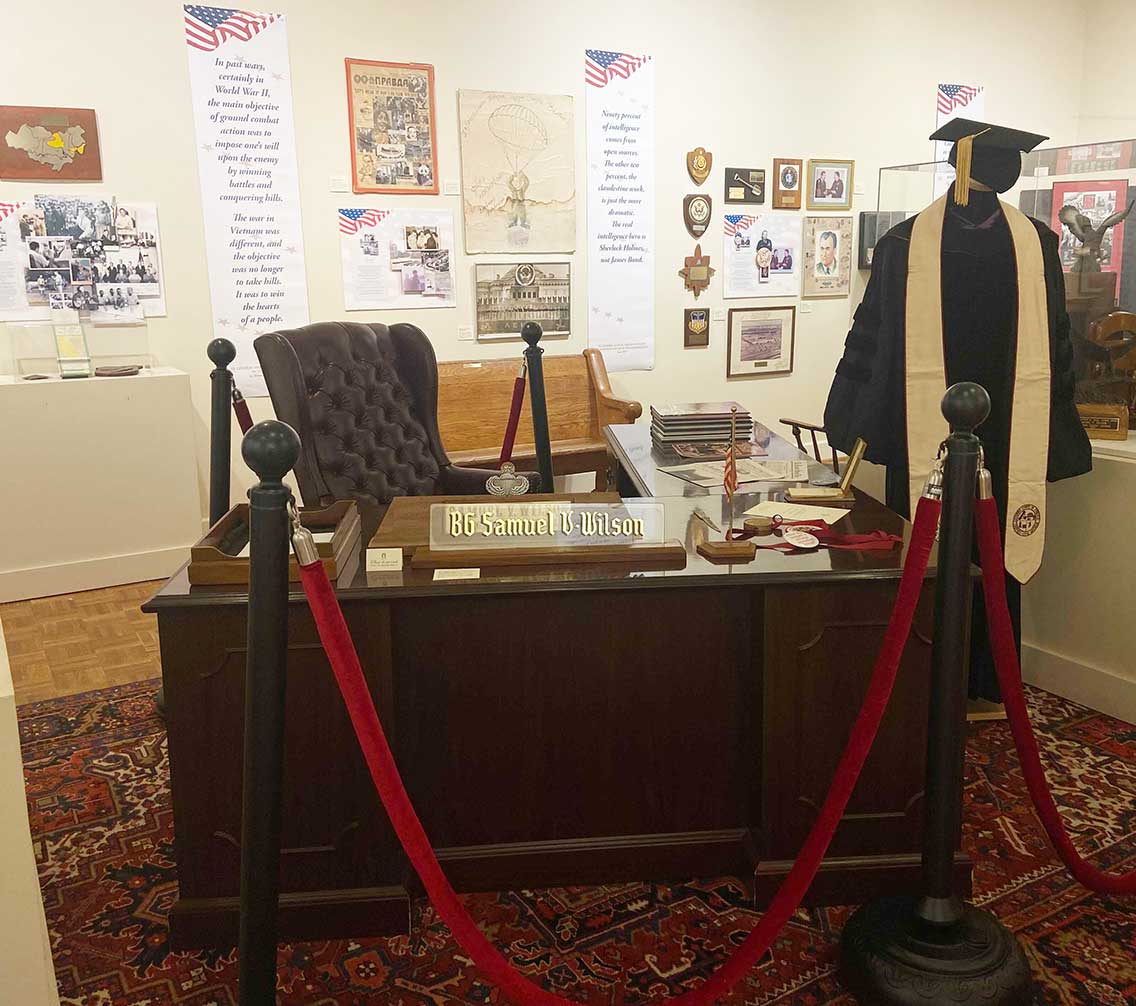 Special Projects Archivist Dr. Colin Woodward spent the past two years working with and organizing the papers of the late Lt. Gen. Samuel V. Wilson, who served as College president from 1992 to 2000. The collection, which numbers 307 boxes containing thousands of letters, military records, photographs, speeches, personal writings, and family correspondences, is the centerpiece of the newly created Hampden-Sydney College Archives and Special Collections. Director and Curator of the Atkinson Museum Angela Way collaborated with Dr. Woodward, Dr. Richard McClintock, and Hampden-Sydney students to curate the exhibit.

Among the items on display are Wilson’s desk and Special Forces uniform, as well as photographs from his life and career. The oldest find in the otherwise mostly 20th century collection was a handwritten Hampden-Sydney bachelor’s degree from the 1700s that was issued to one of Wilson’s ancestors. Woodward found that the most interesting items were photos and letters related to Wilson’s time in the elite World War II unit, Merrill’s Marauders.

Wilson wrote extensively of his experience during his tenure as 22nd president at Hampden-Sydney. He was chosen by trustees who charged him with leading the institution to a return to robust stability and growth. “General Sam” became a very popular leader with students, faculty, staff, alumni, and others, and after eight years, turned the College over to the next president in much better shape than he had found it. Among his reflections, he said,

“During the weeks after [beginning the presidency at Hampden-Sydney College], I began to realize that almost everything I had ever done in my life was coming together in this job—serving as an instructor in a number of military schools, especially developing and teaching courses in leadership, language, and area studies; acting as a consultant to various foreign governments; diplomatic postings; running clandestine intelligence operations, as well as an intelligence analyst; briefing Presidents and their cabinets on intelligence issues; assignments in economic development in Third World nations; studies at the War College level; senior military command assignments and heading up major government agencies as well and, in the process, becoming well-versed in planning, programming, and budgeting. All of these things and more seemed to point the trail to Hampden-Sydney. Not any of the experience has been wasted in the job.”

The exhibit will remain open through November. The papers will be viewable online using the Archives & Special Collections library portal.

An Officer and a Gentleman:
The Life and Times of Lieutenant General Samuel Vaughan Wilson
Esther Thomas Atkinson Museum
10-12 & 1-5pm weekdays and special event Saturdays
open through the fall semester, 2021
Free and open to the public