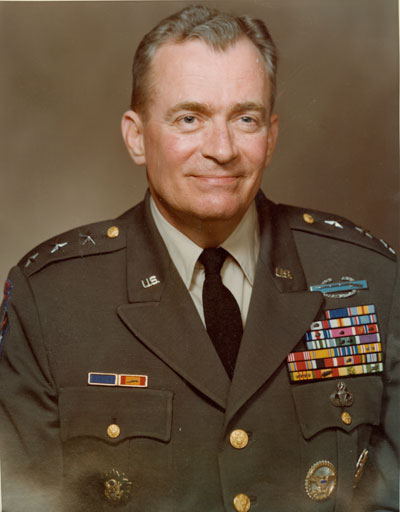 Samuel V. Wilson was born on a farm in rural Prince Edward County, Virginia, near the community of Rice.  Sam and his brothers and sister were raised in a very Christian household by his father Jasper and his mother Helen.  All his adult life, even when serving as a spymaster in Berlin during the Cold War, or as president of Hampden-Sydney College, Sam taught Sunday school.

Young Sam graduated first in his high school class in 1940 with the intention of enrolling in the Fall Term class at Hampden-Sydney College.  Instead, he walked in the rain the seven miles from the farm to the Army National Guard station in Farmville, lied about his sixteen years of age (adding two years), and enlisted.  Sam rose quickly through the ranks to the rank of sergeant, and was selected for Officer’s Candidate School.  At 18, Sam was a young Second Lieutenant at Ft. Benning, Georgia.  Lt. Sam was tasked to take over the infantry tactics and leadership course at Ft. Benning after the untimely death of the officer who had long taught the course.  Sam thrived in this environment, researching strategy, tactics, and the precepts of infantry leadership.  His sand table demonstration gained notoriety and was even observed by President Franklin Roosevelt.

Responding to a call from the president for “volunteers for a dangerous and hazardous mission,” Sam joined the Office of Strategic Services (OSS)—which evolved into the CIA—and was detailed to the 5307th Composite Unit (Provisional) under the command of General Frank D. Merrill.  The unit became better known as “Merrill’s Marauders.”  The regiment operated behind Japanese lines in Burma (Myanmar).  Of the 3,000 soldiers who walked into the country only 99 men survived.  The exploits of this unit’s expedition behind enemy lines was detailed in the book The Marauders (Charlton Ogburn, 1956) and the major motion picture Merrill’s Marauders (1962)—in which Sam Wilson appears in the role of Gen. Merrill’s adjutant.

After the war, Captain Wilson was offered a commission in the regular Army.  Discovery of his age discrepancy on his National Guard enlistment resulted in his reinstatement in the regular Army at the rank of Second Lieutenant.  Nevertheless, Sam succeeded at the challenges placed before him and he swiftly rose through the ranks again.  Although the 21 year-old Sam only had a high school diploma, he was selected for the Foreign Area Specialist Training Program.  He was sent to Columbia University for graduate study in Russian language.  After his graduate study he was assigned for a period of work and study in Europe during which Sam developed near-native fluency in Russian and working knowledge of several other European languages.  Captain (again) Wilson worked in many European countries as an interpreter and diplomatic courier.

Sam Wilson’s military career frequently included postings to the CIA in many capacities, including what is referred to as “human intelligence,” or more popularly in the press as spy craft.  He served as the CIA’s spy or runner of spies behind the Iron Curtain during the Cold War and in Southeast Asia.  He served as Deputy Secretary of Defense for Special Operations during the period of the Cuban Missile Crisis.  Subsequently, now Lieutenant Colonel Wilson was posted to Vietnam as a foreign service officer with the personal rank of Minister in the US Embassy there.  He was assistant to Ambassador Henry Cabot Lodge.

In the mid-1960s, now Colonel Wilson was designated to command the Army’s Kennedy Institute for Military Assistance, where he developed the Army’s counter-insurgency and nation building strategies (COIN) that became the backbone of America’s approach to tackling the war in Vietnam and subsequent limited-conflict conflicts.

As the 1960s drew to a close, Col. Wilson was promoted to the rank of Brigadier General and chosen to be Assistant Division Commander of Operations of the US 82nd Airborne Division at Fort Bragg, North Carolina.  In the early-1970s Brigadier General Wilson was US Defense Attaché (and reportedly CIA Station Chief) in Moscow.

In 1977, General Sam retired from active duty in the Army and returned to his home in Rice, Virginia.  He developed a close association with Hampden-Sydney College, the school he had originally intended to attend after high school, and began teaching classes on national security and intelligence.  General Sam quickly became one of the most popular instructors at the College. 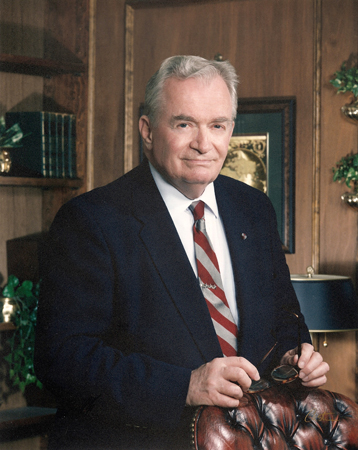 Between 1989 and 1992, Hampden-Sydney endured a period in which the College saw four presidents of the institutions come and go.  A freshman entering in the Fall Term of 1989 would have experienced four college presidents during his tenure at the College.  The trustees of the College, therefore, searched for someone who could lead the institution to a return to robust stability and growth.  In 1992 the trustees chose General Sam to become the 22nd president of Hampden-Sydney College.  General Sam became a very popular leader of Hampden-Sydney College with students, faculty, staff, alumni, and others.  He oversaw a period of growth of the student body, the faculty, the College’s endowment, and the physical plant.  After helming the College for eight years, he turned it over to the next president in much better shape than he had found it.

After a second retirement, General Sam continued to both teach at the College and to advise the intelligence community in Washington, DC.  Ever the servant leader, General Sam sought as he led to give broad credit to others, and to develop leadership skills in all whom he touched.

The rigors of World War II, especially the Burma Campaign, took a great toll on General Sam’s health.  He had been appointed to the Military Academy at West Point five times, each time being rejected due to the after-effects of beriberi, amoebic dysentery, malaria, dengue fever, and other maladies contracted in Burma that left Wilson in the hospital with a body weight less than 100 pounds.  Long-term, General Sam quietly suffered a series of physical problems that greatly affected his mobility.  Yet, he never slowed down.  Even in his tenth decade he continued to reach out to others to follow the progress of their work and development.

In late spring 2017 General Sam passed away quietly at his home, surrounded by his family.  A funeral and celebration of his life was held at the Presbyterian Church at which Sam and his family had worshipped and served for many generations.  Later, a memorial service was held in the Presbyterian Church in the heart of Hampden-Sydney College where Sam had for many years taught Sunday school to the College’s students.  The service was very well attended by people from near and far, representing the military, the US, State, and local governments, businesses, academia, many of General Sam’s former students, and others whose lives he had touched.  It was a moving celebration of the life of a man who was as good as he was great.