Rollie Edwards '17 wanted an American flag bow tie to wear to a Fourth of July party, but every one he found was too expensive. So, he made one. Now he owns his own handmade bow tie company, Whitley Cotton Company.

Sew Many Ties, So Little Time

This story appeared in The Record, July 2014 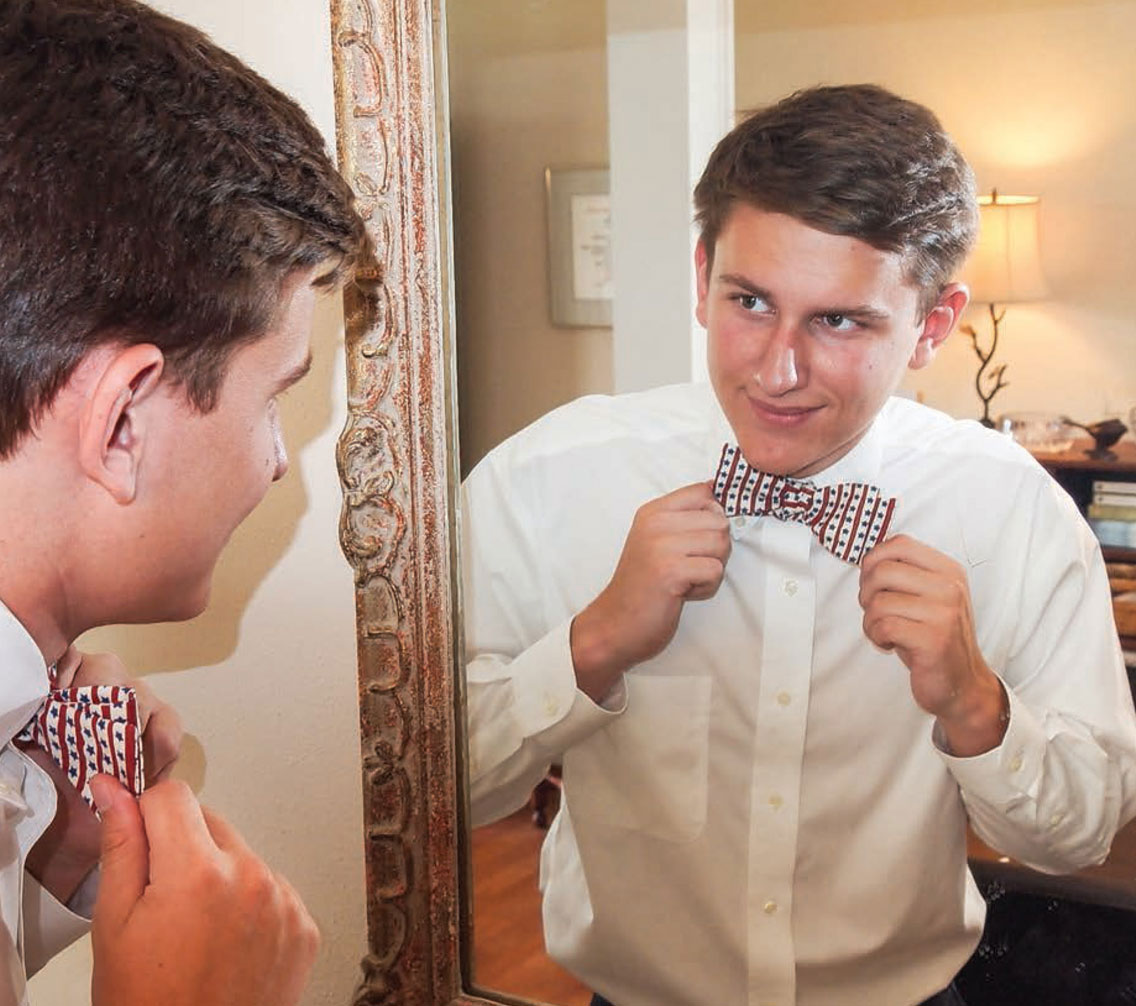 It started as many entrepreneurial stories do: Rollie Edwards '17 wanted an American flag bow tie to wear to a Fourth of July party, but every one he found was too expensive. So, he made one. He already knew how to sew; his mother had taught him sewing and knitting years before. He watched some YouTube videos about making bow ties, bought some fabric, and got to work. Little did he know that in less than a year, he would be well on his way to starting his own handmade bow tie company, Whitley Cotton Company.

The Edwards family is full of creative, crafty people. Edwards' grandmother, mother, and sister all sew, crochet, and knit. When he was a child, there was always someone around sewing or knitting, and so it was something he learned at an early age. He even started a knitting club in the second grade, although he admits it was mostly to meet girls.

In the eighth or ninth grade, he started wearing bow ties and has preferred them to long ties ever since. Finally his affinity for bow ties and his ability to sew came together like the perfect seam. And people noticed.

"I started by making a lot for myself and just wore them around. People started saying, 'Aren't those the bow ties that you make? I like that one. I want one of those.' So, I started making them for other people."

Because he charged only $15 for his handmade bow ties (even for custom orders), demand increased quickly. He faced a rush of orders just before Christmas last year and had to turn away some customers because he was too busy studying for finals.

He makes 15 or 16 during a full workday, a "work-day workday," as he calls it. "I sit down and make a large batch at one time. I handcraft each one. It's a long process."

Although the ties are his bread-and-butter, Edwards also makes cummerbunds and will soon start selling Whitley Cotton Company-branded T-shirts. A bow tie and cummerbund set sells for $60.

"When I was considering other products, I tried making bows for girls' hair, but that didn't work out very well. Then I was looking at the Vineyard Vines website and I saw their cummerbunds. I thought, 'That can't be too difficult.' My grandmother, my mom, and I sat down and watched a couple of videos one day on how to make cummerbunds and then took apart one of my own. From there we just figured it out. The first one turned out pretty poorly, but after that I got it down. A lot of my fraternity brothers wore them to their formals this year."

Edwards considered also making long ties but never moved beyond experimentation. He found that long ties take longer to make and require much more fabric. "I've made one," he says. "I don't wear it; no one wears it."

He likes that his apparel is handmade in America, but that makes expansion challenging. Edwards is considering employing his grandmother and some of her bridge club friends to take over manufacturing while he concentrates on marketing and distribution. He is already working on getting his bow ties into the Hampden-Sydney campus store and wants to set up a booth at a home football game in the fall.

Edwards' bow ties have been a huge hit at Hampden-Sydney. At the request of Dean of Students David A. Klein '78, he recently made one from two bandanas brought home from student service trips to Central America.

Selling bow ties has opened many doors around campus. He has met many students, faculty, and administrators whom he probably would not have met if they weren't interested in buying his product.

"The coolest thing is the Facebook 'share' option. I've worked at and attended summer camps in Canada and across the Eastern U.S., so I have a lot of friends on Facebook who share photos. I may get a message from a random person in Georgia asking me to make a seersucker version. We may have one mutual friend, and it may be someone from camp. It's great. It was also nice to see photos of people wearing them on Facebook after Easter Sunday or to walk around a football game and see so many people wearing my designs."

This summer Edwards will be busy making bow ties until he begins working as a camp counselor. He is also rolling out a new Whitley Cotton Company website and filling orders.

Bow-tie production is a challenging path. "I would like to see this become my occupation and have it become a company like Collared Greens [founded by Randy Ashton '01] or Southern Tide, but I have to be realistic. I may end up in finance or banking."

Whether or not his business takes off, Edwards will always be able to enjoy making his own bow ties-or whatever he chooses to create. Learning to sew and knit gave him the opportunity and the independence to express himself creatively, a skill his mother and grandmother likely had in mind when they first put a needle and thread in his hand.