Now retired from government service, Trey Lackey was able to acknowledge his 25 years with the Clandestine Service of the Central Intelligence Agency when he gave the keynote address at Hampden-Sydney College's Wilson Center for Leadership 9-11 commemoration.

From The Record, December 2017

Public Service in the Shadows

A quick Google search for Hal V. "Trey" Lackey III '86 yields almost no hits-surprising in this age of instant information and social media interaction, especially given the H-SC alumnus' successful career as a public servant.

In fact, Lackey has returned to the College frequently over the years as a member of the Wilson Center for Leadership Board of Advisors, but he notes that "for the longest time when I was on campus for a lecture or a panel discussion, I really couldn't talk about what I did, or even where I worked." 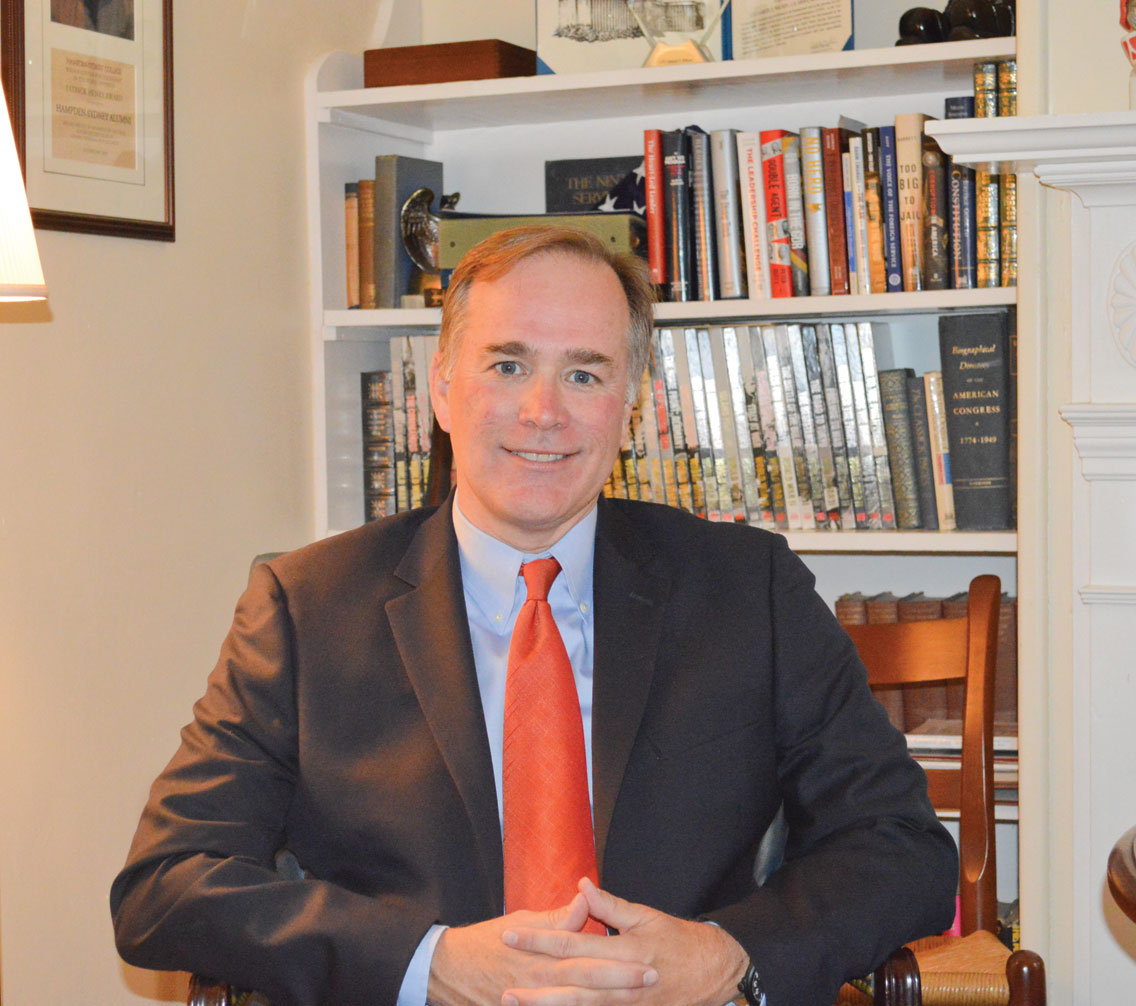 This September, however, Lackey was able to acknowledge his 25 years with the Clandestine Service of the Central Intelligence Agency when he gave the keynote address at the Wilson Center's 9-11 commemoration. Although the former operations officer cannot give specifics about his work with the CIA, broadly speaking he ran operations across multiple regions and in three conflict zones throughout Europe, South Asia, and the Middle East.

The CIA website describes an operations officer's job as "clandestinely spotting, assessing, developing, recruiting, and handling non-US-citizens having access to foreign intelligence vital to US foreign policy and national security decision-makers. Operations Officers (OOs) build relationships based on rapport and trust using sound judgment, integrity, and the ability to assess character and motivation. All OOs address a highly diverse and dynamic set of intelligence requirements on country- and region-specific issues, as well as transnational issues such as counterterrorism, counterproliferation, and cyber [security]."

It is a job that Lackey was well-prepared for with his Hampden-Sydney degree. "It's difficult to think of a better preparation for the job than a liberal arts education," Lackey claims. "What makes a successful operations officer? Strong interpersonal and communication skills, the ability to assess situations and people, and intellectual curiosity-a trait I certainly didn't have when I arrived at Hampden-Sydney, but had really developed by the time I graduated."

His background as a history major proved vital to Lackey's success, as well. "Professors like Ron Heinemann, Jim Simms, and John Brinkley taught me how to put things in historical context," he says, "and when you're in South Asia or the Middle East, it's much easier to understand what's going on in the moment if you have that sense of history." He also found inspiration from one of the College's most revered presidents, General Samuel V. Wilson. "I wanted my work to be intellectually substantive, and General Sam Wilson was a great example of that," says Lackey. "Wherever I went, I got to know the culture and language, developed close relationships with the local people, and really threw myself into it intellectually."

Although the bulk of Lackey's career was spent overseas, his few domestic assignments included a year at the White House on the National Security Council staff-spanning the final months of George W. Bush's presidency and the first months of Barack Obama's presidency-as well as 14 months at the FBI as then-Director James Comey's national security liaison. He calls both experiences fascinating, but in the fall of 2016 he made the decision to retire from government service and transition to the private sector. He is now an executive in the homeland security group at CSRA, an information technology and cybersecurity firm where he works with fellow H-SC alumni Donald Robinson '02 and Tom Doheny '07.

Speaking to the Hampden-Sydney community about "Re-imagining a Safer World" on the 16th anniversary of the September 11th terror attacks, Lackey laid out what he feels are the most significant geopolitical and domestic challenges facing the nation, ranging from North Korea to the opioid crisis. Although the solutions are complex, he says an active and engaged government that utilizes both hard and soft power is vital, as is the involvement of the business sector, nongovernmental organizations, and mission groups.

In addition, Lackey encouraged Americans to rediscover the national unity that he feels has frayed over the last decade. "In times of crisis like 9-11 or Hurricane Irma, Americans come together and support each other well," he explains, "but in recent years there has been an exploitation of our differences rather than an emphasis on our unity. We need to rejuvenate our sense of civic unity and develop institutions that bind us together beyond the times of crisis."

Lackey ended his address by challenging Hampden-Sydney students to think critically and creatively, to push their personal boundaries and leave their comfort zones: "Looking back on my career, I traveled the world, worked closely with two presidents, met world leaders-and I was just an average, small-town Virginia guy at Hampden-Sydney. The lesson is to take chances, think unconventionally, and push yourself to do something you never imagined."