Born at Hampden-Sydney during his father's undergraduate years, new College Chaplian Keith Leach '81 has truly come full circle. He shares his journey to faith, to ministry, and back to Hampden-Sydney. 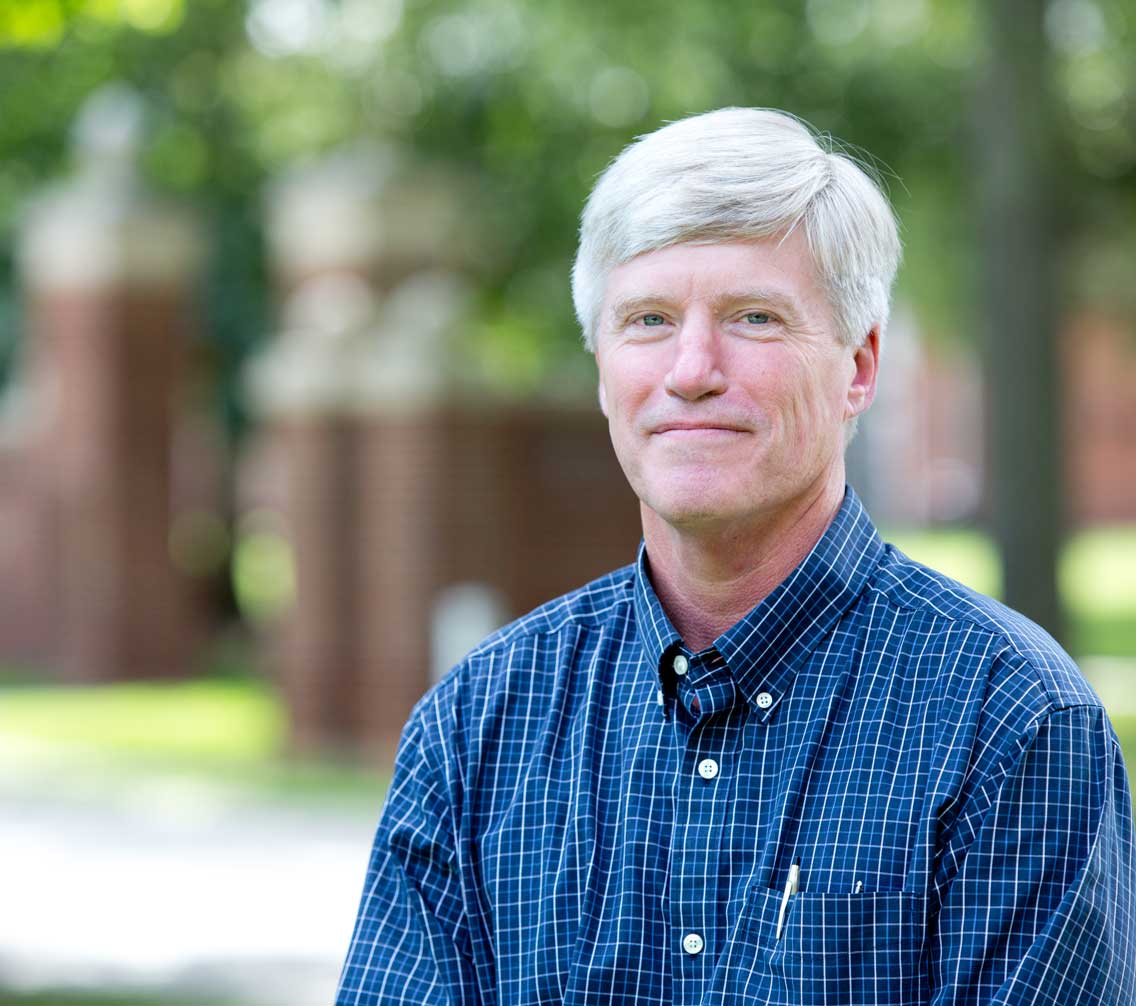 When I called the Rev. M. Keith Leach '81 to request an interview, he assured me his life was not interesting enough to merit an article. Nothing could be further from the truth. Born at Hampden-Sydney during his father's undergraduate years, this alumnus' life has truly come full circle.

We met on the last quiet day of the summer, just before the R.A.s and football players returned to campus, and the new College Chaplain shared his journey to faith, to
ministry, and back to Hampden-Sydney. What follows is an excerpt of our conversation.

Tell us about your history with the College. What has this place meant to you and your family?

It's really a history of relationship, one that springs from my parents' marriage in Raleigh while my dad was a student at NC State. My mom walked to church on Sundays because my dad had to take the car to work on the weekends. Well, the closest church to married student housing was Presbyterian, so in some ways I'm a Presbyterian by proximity. It just so happened that the pastor of that church was a Hampden-Sydney graduate, the Rev. Robert "Bob" Bluford '45. My dad didn't want anything to do with him, but Bob was fairly stubborn and wouldn't let him off the hook. Eventually my dad attended church, and within a few years felt called to the ministry. Because of Bob Bluford, he decided to study at Hampden-Sydney, rather than at Davidson College in North Carolina. That was the first Hampden-Sydney connection. I was born five months after they moved here, so my earliest, earliest memories are of Hampden-Sydney. It was an idyllic place for our family.

Your family moved back to North Carolina after your father finished seminary at Union. When you returned to Hampden-Sydney years later as a student, did you know you would someday enter the pastorate?

When I arrived as a student, everybody I met said, "Oh I'm pre-law" or "I'm pre-med. What are you doing?" I was just trying to find the right building! I had no plan for my life at all. I thought, "I'm really trying hard to graduate- that is my one goal." I only took two religion classes: Old Testament with Dr. Owen Norment and New Testament with Dr. Robert Rogers. I'd been hearing the Bible and reading the Bible my whole life, but they taught a totally different way of dissecting it. Although I enjoyed those classes a great deal, there was no call to ministry. If anything, growing up a preacher's kid, it was probably the other way around.

I ended up majoring in history, but religion is such an integral part of the history of humanity. You can't study an era without understanding the religious context. How do you grasp historically what was happening in 1500's Europe without understanding the religious climate of the day? They were intertwined, and I would say they are still intertwined today. Perhaps, in our secular society today, we don't understand that. When we as a society question what should we do and how should we go, it would be foolish to ignore the fact that humanity has been doing this for thousands of years. So at Hampden-Sydney I learned to look to history and apply it to today. I also learned a lot of cool facts to spit out at cocktail parties.

Mostly, though, I learned to think when I was at Hampden-Sydney.

I learned to organize thoughts and arguments, to understand the roots of arguments and where they lead. The professors here did not give me answers; they gave me questions. They gave me facts, they asked me questions, and they made me come up with answers. My Hampden-Sydney professors didn't grade me on whether they agreed or disagreed with my answers; they graded me on how well I supported my positions with facts and how well I explained my thought processes. That. That right there was worth the price of admission.

A Long Road to the Pulpit

You earned your M.B.A. at William and Mary and had a successful career in business. How, then, did you decide to leave the business world and enter the ministry?

I worked for the Reynolds Corporation in Williamsburg, then for Caterpillar in Roanoke and Richmond. BP American sent me to Charleston, South Carolina, and eventually Cleveland, Ohio. After I left the corporate world, I ended up in Tallahassee, Florida, at a management consulting firm working with higher education and non-profits. Although it was interesting work, the travel was difficult. So eventually I went to work for a general contractor in Tallahassee because I could be home every night with my two sons.

This "calling" thing unfolded gradually. In 2002 a Presbyterian retirement community needed help filling its pulpit, and even though I thought, "I have two kids, a wife, a career. I don't have time for this," it became my ministry for almost ten years. Monday through Friday I worked as a general contractor, while Sundays I led two worship services at the center.

I figured out fairly quickly that I had no idea what I was doing, so I started taking distance classes at a seminary. Eventually I enrolled in a Master of Divinity distance cohort at the University of Dubuque Theological Seminary, driving 1,100 miles from Florida to Iowa twice a year for several weeks of intensive classes. On one of those long drives home from Dubuque in 2009, I ended up going north in a cloverleaf instead of south. At that moment, driving toward Chicago rather than Florida, I understood for the first time that I was called to be a full-time pastor.

So a wrong turn on the road clarified the right direction for your life. Was the path clear from there?

In 2011, I accepted a call from a church in Ohio. On the 12th of May I graduated from seminary, on the 20th of May I was ordained, and on the 29th of June the church facility was destroyed in a storm. It's kind of strange. You get ordained in a building and one month later it's blown down-it's somewhat worrisome.

Perhaps the most important thing that I learned through that experience is that despite our differences- within a congregation, within a denomination, and within the universal Christian church-we can cometo agreement and even grow closer through our differences. I've thought about this a lot since I've been back at Hampden-Sydney. When we really come to an understanding of what we believe and aren't threatened anymore by what someone else believes, we can enter into an honest dialogue with one another. Then we can have true conversation and true love the way God intends.

After five years literally and figuratively rebuilding a church, you've returned to the College as Chaplain. Tell us about your vision for the young men at Hampden-Sydney.

I've moved my whole life, so Hampden-Sydney is the closest thing to a home I've ever had. Being here again, the idea that this congregation can make a difference in so many lives intrigues me. Think about it: we have 1,100 students across the street. If we impact just 10 young men a year, the effect will grow exponentially throughout the years. In order to do that, I have to build relationships, and relationships are fueled by contact. So my plan is to be available and to model a Christian, ethical lifestyle.

This business of making good citizens and good men, it's tremendously important. If our students are going to be good men, if they're going to help the world, then they've got to come to an understanding of what grounds them. They have to know: What is my personal ethic? Am I going to be all about me and what I can gain? Whose lives will I impact? Will I shirk my responsibility as a citizen, or will I live it out? The question is not, "Will I be a role model?" The question is, "What will I model?"

We have to impact the lives of the those we can, then let them impact the lives of those around them. It's what Jesus did when he got a group of fishermen and tax collectors to be his disciples. I think back to the Rev. Bluford, who impacted my father, who has changed so many people down the line. The other day, I talked to someone from my Ohio congregation who is entering ministry. I told her, "You're just one in a long line of people impacted by this tiny college."