Rakeem Walker ’20 has been inspired by, challenged by, and changed by the Hampden-Sydney brotherhood. The Washington, DC native discusses his semester of study in Provence, France. 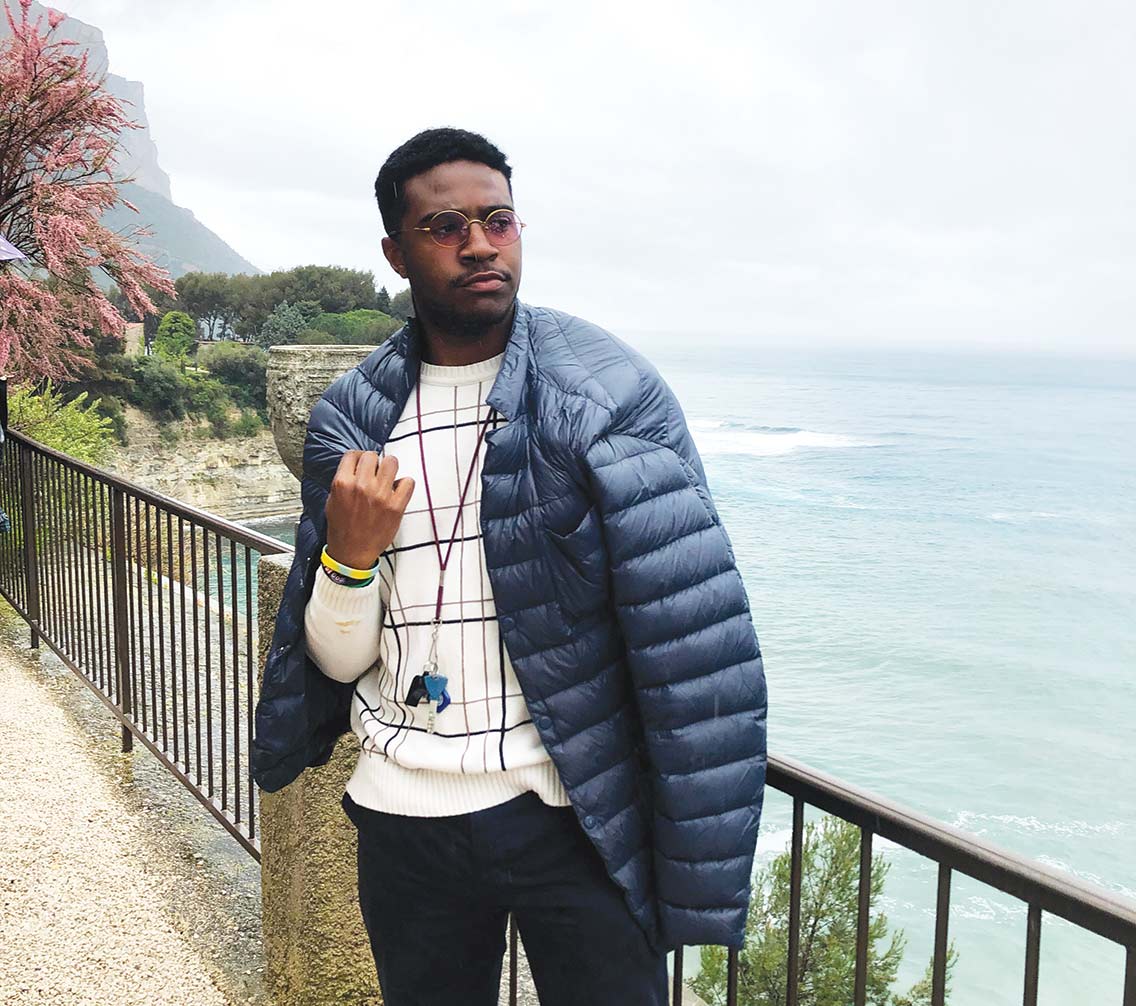 Nothing Routine About It

You seem to be a fixture on campus—everyone knows you and your name is associated with a variety of H-SC organizations. Tell us about your campus involvement.

I completed the Wilson Leadership Program my freshman year, I’ve been involved with Minority Student Union (MSU) since my sophomore year, I helped set up the Brother for Brother mentorship program, and I’ve always competed in intramural sports—but most people probably know me as the guy at the Tiger Inn, where I’ve worked since my freshman year. I’ve also worked in the computing center, fitness center, and at home football games; interned with the communications and marketing department; and served as a resident advisor. This year I’m president of MSU and head RA for Greek life, overseeing a staff of ten house managers.

Of all the roles you’ve played at H-SC, you say that serving as an RA in a freshman dorm was one of your favorites. Why?

Mentorship. One of my passions is helping people, especially younger guys. I was fortunate to have a lot of people mentor me throughout the years, so I always wanted to do the same for others if I got the opportunity. I was nervous when I was assigned to freshmen, though, because it’s a lot of responsibility—for many of them, it’s their first time away from home, first time at an all-male institution, plus Hampden-Sydney isn’t an easy place, academically! My goal was to make our floor like a family, and I think we succeeded. At the end of the day, brothers always come together and support each other, and that’s exactly what we did.

We hear a lot about the Hampden-Sydney alumni network, which is consistently ranked one of the best in the nation. Did you benefit from that network as a Hampden-Sydney student?

Absolutely. I’ve had two internship experiences with alumni: I spent the summer of 2018 at the corporate office of Thompson Hospitality in Reston, where I met daily with the retail division director of finance, shadowed with general managers of the company’s restaurants, and met several times with company founder Warren Thompson ’81. It was an awesome experience.

Last summer I was a risk management intern at the Federal Home Loan Bank Office of Finance, where Nico Correa ’19 had interned the previous summer with Jonathan Hartley ’97. I worked on projects to help the bank be more proactive with its partners in the capital markets, so I got to work with Bloomberg and expand my Excel and presentation skills. I also led the internship committee and was selected to organize a diversity fair.

We all come to Hampden-Sydney for one thing: the network. But networking is not a magic trick; you have to go out and do the work. Nico did his part—and I appreciate that he put in a good word for me—but I also had to do my part with the resume, GPA, and interview.

"You know, the College preaches brotherhood a lot, but I’m here to tell you that it’s real. For most of my life I was the role model for other people, but for the first time in my life I found people my age whom I could look up to, who were role models for me." 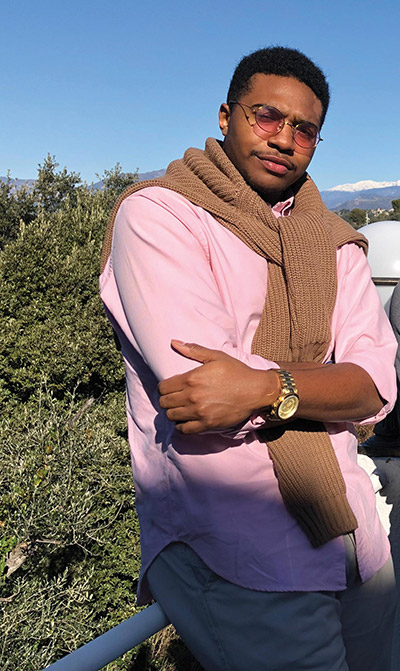 Partway through your Hampden-Sydney career, you made a difficult decision to take a year off. How did that shape your college experience?

I took a break because of financial reasons, but I used that time to reflect on my future and my goals. You always hear that everything happens for a reason. Well, I feel like I was home for a reason: to be part of the success of our family company [which owns and operates food trucks in Washington, DC]. That year, we had the opportunity to partner with the marketing company for the movie Almost Christmas. We helped promote the movie at Howard University, Morehouse College, and Spelman College, an experience that made me passionate about growing my family business. And, even though I was out of school, I committed to keep learning and growing, so I got my EMT certification and worked with the local fire department. The department gave me a scholarship that helped me return to H-SC.

How was the transition back to campus?

What really brought me back to Hampden-Sydney was the brotherhood. You know, the College preaches brotherhood a lot, but I’m here to tell you that it’s real. For most of my life I was the role model for other people, but for the first time in my life I found people my age whom I could look up to, who were role models for me.

Who were some of those Hampden-Sydney role models?

Jamie Turner ’18 took me under his wing my sophomore year and became one of my biggest role models. He recommended classes, encouraged me to become an RA, inspired me to become MSU president. I absolutely wanted to follow in his footsteps, but the one thing he said he regretted was not taking advantage of the chance to study abroad while at H-SC.

I was also inspired by my freshman roommate Nico, who’s from Colombia but speaks English as fluently as his native language. After he spent a semester in London, I looked into England or Australia for a study abroad. Then I realized that if you want to grow as a person, you have to step outside your comfort zone, and my biggest fear was the language. I was struggling in French; writing and grammar were easy enough, but speaking scared me. So at the last minute, I changed my plan from Australia to France.

People say that immersion is the best way to learn a language. Did you find that to be true?

Definitely. Going abroad is a chance to grow as a person and experience a new life, especially when you get to live with someone from the local area. My host dad’s kitchen table became my classroom: dinner started at eight and ended at 11, and the rule was that he spoke English and I spoke French so that we both could practice. We talked about our days, our lives, our goals. At first it was a lot of repeating myself, but I got better and better. He told me that I would learn French because of my will power, and by the end of the term I received the award for most progress in my French class.

I really wanted to meet people from other countries, so at first it was a disappointment that my classes were made up entirely of American students. I decided to step outside the box, though. I laced up my shoes, went for a walk, and found a local basketball court, which is where I made most of my French friends. Speaking French while playing basketball was a new experience and ended up being a great way to learn the language.

It’s nearly impossible to sum up four months immersed in another culture, but can you share one or two highlights of your study abroad in France?

I loved the French lifestyle. The food was healthy—my host dad used fresh, organic produce and we ate very few processed or fried foods—and we walked everywhere. I always joked that I was too cheap to call an Uber or catch a taxi—I preferred to use the legs and feet that God blessed me with. I lost twenty pounds!

My time in France made me realize that America still has some things to work on, for sure. We’re such a large country that it’s hard to bring us all together as one unit. That was one thing I admired about France: it was a single unit. My host father is a black man, but he doesn’t call himself African-French—he is just French.

You’ve got to fall out of your routine. When you get into a routine, you don’t see new things, don’t experience different things. You just don’t. Even in France, I walked the same routes and settled into daily patterns—and when you do that, you stop noticing your surroundings. Moving forward, I’m trying to do something new every day, because I don’t want to be trapped in a routine.